EXPECTATIONS: In a world in which movie titles have been dumbed down to only the barest of essential nouns, descriptors and sequel numbers, there is an endearing sort of honesty in a title like Big Ass Spider! There are only so many ways to interpret that, and all of them wind up at the same conclusion: Big Ass Spider! promises to be a tongue-in-cheek monster movie about pretty large arachnid. Or it could be about ass-spiders. Who's to say?

REALITY: One of the least insightful comments a critic can make about a film is "It is what it is." It's a statement that implies the reader might as well not continue reading the review, because any poster or trailer will illustrate the film just as well (if not better). Granted, anyone saying that about anything probably doesn't know what the hell they're talking about anyway. And yet, in this case, it's the only statement that seems to fit. Big Ass Spider! is what it is. This film is a number of things, but deceptive and unpredictable are not among them. 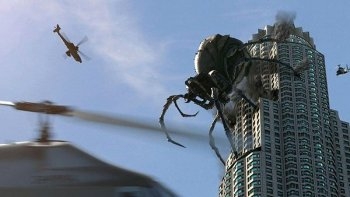 Truly the biggest ass spider known to man.When a mutant spider breaks loose inside a Los Angeles hospital, doofus exterminator Alex (Greg Grunberg) takes it upon himself to capture and kill the arachnid. Soon, the military arrives to tell him what's up. Major Tanner (Ray Wise) and Lieutenant Brant (Clare Kramer) inform Alex that unless the spider is contained, it will continue to grow at an exponential rate and eventually destroy the city. After the spider escapes the hospital, Alex and his newfound sidekick, a hospital security guard named Jose (Lombardo Boyar), must track it down and kill it before it reproduces.

As creature features go, Big Ass Spider! is a cut above your typical SyFy Channel Original, but a few steps beneath the big-budget mayhem of, say, Eight Legged Freaks. Fortunately, the film does not play coy with its titular spider. As it continues to grow, there's simply no hiding it. Several action sequences take place in broad daylight, with the big ass spider front and center. It's clear they dumped all of the film's money into the CGI spider, because it's the only part of the film that doesn't look tailor-made for basic cable.

The most glaring problem with Big Ass Spider!, though, is that it doesn't know quite how silly it wants to be. At times, it seems content to be a low-rent creature feature, and actually kind of succeeds in these moments. Other times, it tries to edge itself toward winking satire, if not flat-out parody, only to pull its punches and fall flat on its face.

One such scene involves an oddball scientist character (Patrick Bauchau) struggling to explain the spider's origins as Alex and Jose constantly ask him to dumb things down for them. Here, we discover just how dumb our two heroes are, asking for layman terminology only to be baffled by it. With every question, Alex's IQ seems to drop even further, practically turning the scene into a joke on itself. ("Increase in size? What does that mean?") Problem is, the film doesn't quite seem to know what joke it's making, or even how far to go with it.

And who said movie stars were glamorous?


Alex is a real moron of a protagonist, wholly convinced of his ability to deal with any insect that stands in his way. He's essentially cut from the same cloth as Dale Gribble, constantly making "pew pew" laser noises as he sprays bug poison everywhere and all over himself. Greg Grunberg is an affable lead, but if his character isn't furiously hitting on every blonde in sight, he has a way of blankly playing himself up as the hero to no one in particular (again, this would almost be the joke if it so clearly wasn't). Meanwhile, Jose is the broadest of awful Hispanic stereotypes, but Boyar throws himself so gleefully into the character that he practically steals the film right out from under everyone else.

Big Ass Spider! is a big, steaming pile of almost. The film is a comedy, but falls just short of any big laughs or biting self-awareness. The kills are a little bit gruesome, but not exactly scary. Director Mike Mendez seems aware of how silly his film is, but for whatever reason refuses to milk it for all it's worth. We could have had the giant spider comedy to end all giant spider comedies. Instead, we got a spider movie starring Bruce Campbell's pudgy half brother-in-law that no one likes to talk about.

MINORITY REPORT: At least this movie provides an important lesson in hyphen usage. What the hell's an ass spider? For that matter, what are legged freaks? - Sean "Keanu Grieves" Hanson