Gravity; Curse of Chucky; Battle of the Year

EXPECTATIONS: As a horror franchise, Child's Play is rarely mentioned alongside A Nightmare on Elm Street, Friday the 13th and Halloween. That's unfortunate -- Child's Play is perhaps the greatest horror franchise of the bunch, a statement I'll expand upon in my review -- but hopefully Curse of Chucky, hyped as a stripped-down, back-to-basics spiritual reboot of Child's Play, will finally earn this series the respect it deserves, even if it's going direct-to-VOD.

REALITY: From its opening moments, Curse of Chucky represents a change of direction for the increasingly comedy-driven Child's Play franchise. The doorbell rings in some secluded country mansion, provoking passive-aggressive jabs between the paraplegic Nica (Fiona Dourif) and her alcoholic mother Sarah (Chantal Quesnelle). A delivery man drops off a three-foot-long package with no return address. Cookies if you guessed what's inside. Later that night, Nica wakes to a scream and finds Sarah dead in a pool of blood while Chucky sits unnoticed in a nearby chair. 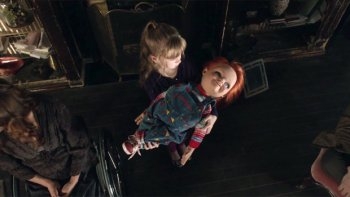 Awww, that's adorable.When Nica's dysfunctional family, including her young niece Alice (Summer Howell), arrives after the funeral, the stage is set for what should've been called Agatha Chucky's Ten Little Idiots. Of course, no one will believe Alice when she claims Chucky talks to her. Of course, no one thinks much of the times when Chucky seems to move by himself. Of course, familial greed and intrigue -- Nica battles with her sister Barb (Danielle Bisutti) for control of the estate, while her brother-in-law Ian (Brennan Elliott) seems to have a little thing goin' on with the family's au pair (Maitland McConnell) -- will eventually dictate the order in which they die and lead us to wonder if one of the characters knows more than he or she seems to about Chucky and what he's doing there. After all, someone had to box Chucky up and mail him there, right?

This is a neat premise and setting, no surprise for a series full of often-overlooked neat premises and settings, including the urban horror of Child's Play, the Lord of the Flies-esque military-school shenanigans of Child's Play 3 and the meta-horror comedy of Seed of Chucky. Despite its appreciable renown, Child's Play has always gotten the short end of the stick in horror canon. Hell, despite referencing dozens of horror films, the Scream franchise ignored Child's Play completely until Bride of Chucky had the audacity to parody Scream 2's poster.


Never mind that writer (and now director) Don Mancini has penned all six screenplays while Brad Dourif has voiced Chucky in all six films. Never mind that the series has always been comfortable with its ludicrous villain, a serial killer who switched bodies with a doll during a toy-store shootout. Never mind that, unlike virtually every other horror franchise that has generated at least five films, Child's Play never felt the need to expand upon its original premise; in the same decade that Halloween offered "druids!" as an explanation for Michael Myers and Friday the 13th gave us "worm-like ancient evil!" as an explanation for Jason Voorhees, Bride of Chucky merely introduced a co-lead and pushed the series in a new direction. Never mind that a sadistic, wise-cracking killer doll is scarier than any number of lumbering, stoic mass murderers because the horror of Child's Play lies in an essential truth: Adults don't believe children. That's especially true when kids blame a toy after, say, they develop Tourette's and their babysitter turns up dead. By the time adults see Chucky for what he actually is, it's too late. 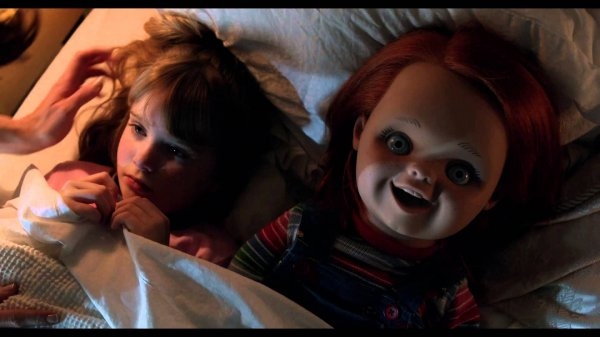 That is soooo... adorable?


That's certainly true in Curse of Chucky, which manages to be atmospheric, tense and morbidly funny in just the right measures for the first two acts. Little Alice suddenly displays a knack for imaginative profanity. Chucky plays Russian roulette by loading one of six soup bowls with rat poison. A storm knocks the power out, leaving this mansion's vaulted rooms illuminated only with flashes of blue. As the adults wrestle with the feeling that something's not quite right, Chucky stalks from room to room, killing them quietly ... and creatively. Sure, Curse of Chucky is built on an old plot, but it's reinvented with imaginative flair and elegant cinematography, earning it a place near the top of the admittedly narrow "killer doll/country-mansion mystery" subgenre. (However, this still remains the standard-bearer. -GD)


I don't want to oversell Curse of Chucky, though. It's undone by a few too many incongruities -- for example, walking/talking Chucky barely resembles inanimate Chucky -- and a third act in which Mancini fumbles the narrative because, having finally succumbed to temptation, he's trying to retrofit a new element to Chucky's origin. It's not as blasphemous as druids, worm-like ancient evils and the like, but let's just say the reason Chucky arrives at this mansion is a lot less interesting than the murderous "adults won't believe you" shtick that propelled the first five films and the first hour of this one. C'est la vie. Curse of Chucky is still pretty entertaining, but I suppose Chucky is starting to show some wear.

MINORITY REPORT: They're trying so hard to be creepy that they actually cast Brad Dourif's daughter as the lead? - Ian "Professor Clumsy" Maddison