Gravity; Curse of Chucky; Battle of the Year

Battle of the Year

EXPECTATIONS: All right, we've been putting this one off for weeks, because while we all knew we had to do it, no one actually wanted to. But come on, a 3-D Dance movie about American Exceptionalism with a supporting role by America's Favorite Woman Puncher Chris Brown? We basically had no choice, it was like cheese you find in the back of the fridge when you're moving. You know has curdled months ago, but you are compelled to smell it anyway. So we decided on our official Cheese-sniffer the only way a group of intellectual professionals can. We counted to three and yelled "Not It!" Or at least the other guys did. Sean had his hand over my mouth.

REALITY: In 1987, martial arts master Y.K. Kim made a little film called Miami Connection, in order to hopefully increase youth interest in Taekwondo. Miami Connection is about an '80s rock band made of Taekwondo masters who fight a gang of motorcycle-riding ninjas who control the cocaine market in Miami. I'm not making any of this up. Miami Connection is terrible and beautiful and wonderful and charming in its incompetency. There is a great deal of unironic appeal to this sincerely bad plea by a possibly insane man for people to be interested in his fading hobby. I mention this because Battle of the Year is cut very much from the same cloth: It's a poorly-planned attempt to drum up interest in an obscure activity, a subdivision of break-dancing known as "B-Boying." (I watched this whole damn movie and I have no idea what this phrase even means.) The difference is that Battle of the Year is narcissistic and commercial to its very core, and that makes it basically unwatchable. If you took everything fun and genuine and sincere from Miami Connection and replaced it by the stunt casting of an unrepentant abusive psychopath, you would have Battle of the Year. 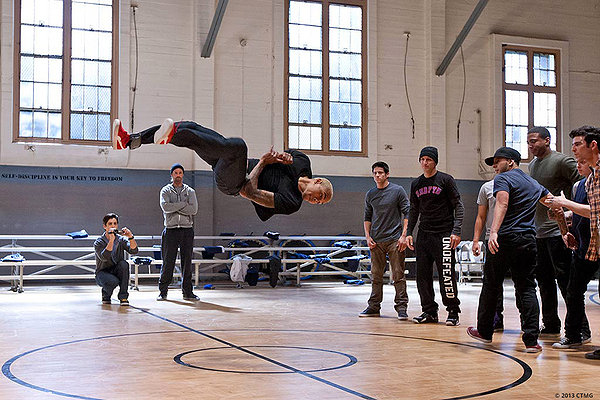 
Battle of the Year opens up an a bunch of suits in a board room arguing about making people think B-Boying is cool, and there is not a hint of satire or irony to be found. Hip-hop mogul Dante (Laz Alonso), whose street cred is questionable at best, wants to bring people back to B-Boying because he's afraid that B-Boy losing popularity means hip-hop loses popularity. This logic is flawed at best, but let's go with it. He hunts down his old friend Jason Blake (Josh Holloway), who is a great coach with a Tragic Backstory, tellings of which we will be treated to at least three times throughout the film. Coach Blake and his assistant Franklyn (Josh Peck) decide to hunt down the best best B-Boys in the nation and assemble a "Dream Team" by putting a bunch of dancers together and eliminating them one-by-one, reality-show style. This is all so that they can compete in the annual international B-Boy competition, the titular Battle of the Year. I should note that a pervasive theme here is that these guys are so angry that America hasn't won the battle in fifteen years, and that the Koreans are the champions. Between this and Red Dawn, I'm beginning to just figure Josh Peck is a racist.

For the duration of its way-too-long runtime, Battle of the Year hits every possible cliche and unneeded conflict possible so that Josh Holloway can remind the team that they are a team, and that teams act like teams, and they are in teams with their teammates, and that a team only functions when the team is a team, and ohmygodSHUTUP. The nameless team members (all actual B-Boyers except Chris Brown) fight among themselves for ridiculously forced reasons, including a feud between team leader "Do Knock" and Rooster (Brown) who are still in contest over a girl they both used to beat - I mean date. Worse than this, however, is the homophobic Afghanistan vet (nicknamed Sniper) who suddenly decides offscreen to accept his gay teammate, presumably because he realized that he is in a team dance-fighting competition, and the idea that there's only one gay guy around is pretty stupid. There are other plotlines and drama moments, because these guys will never be in a movie ever again and they need to make the most of it, but what this means is that it's a full 90 minutes before we even get a look at the battle, and that's including two back-to-back "guys goofing off" montages. 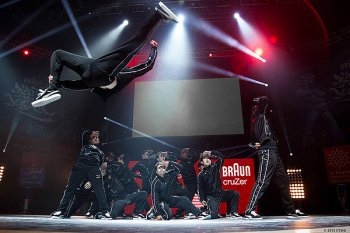 NOOOOOOO crunch!This wouldn't be as unbearable if there just wasn't this air of insincerity about it. The film comes from director Benson Lee, who also made a documentary about B-Boying in 2007 called Planet B-Boy. I know this because there's an entire monologue about how good Planet B-Boy is, and how everyone loves it, it's like their bible. There are even clips inserted in. The guy actually put an ad for his old movie inside of his new movie. That's not the only ad, too. There is another useless scene in which the crew get gift bags and yell out how happy they are to get their Sony PS Vita" and Braun Shaver"! My, it is as if this film about a corporate-sponsored dance team representing the masses of capitalism is slightly lacking in artistic integrity.

Credit where it is due, there is exactly one dance scene in this film that achieves the ranking of "pretty cool", which is not the ranking it needs to be at in order to be worth all of the crap that we have to deal with to get to it. (Note: This scene comes of course after Chris Brown's character is ridiculously injured, because he's the only non-professional dancer in the cast, and they needed some way to get him offscreen so the talented people could take over.) The 3-D dance movie is a cool idea in theory, but people still haven't figured out that "bright colors moving really fast" is not really conducive to third-dimensional viewing.

While I was hoping that this film would have something angering to write about, like Red Dawn's hatred of Asians, or Pitch Perfect's... hatred of Asians, it doesn't even deliver that. (Though it does zoom in on the only Asian kid on the team during the Korean national anthem, which was kind of weird.) Hooray for inclusiveness, I guess, but there's not a hint of sincerity behind it. This is the Burger King Kid's Club model of all-embracing brotherhood: Completely commercialized and bordering on tokenism. When you basically put the corporate "togetherness" memo inside of your movie, it removes a lot of potential impact. Essentially, Battle of the Year is a giant commercial for something people in suits really want you to think is cool, and it comes off just as trite and soulless as it sounds.

MINORITY REPORT: A vanity project that turned out to be self-serving and dull? I can't imagine such a thing ever happening. - Ian "Professor Clumsy" Maddison