Guardians of the Galaxy; Get On Up; A Most Wanted Man

A Most Wanted Man

EXPECTATIONS: It's a quiet week at the Current Releases office, which usually means I have the place to myself. It's a rare opportunity to step out of the small basement where I'm kept to make photoshops for the regular review crew. As I look at the week's list of movies that need to be reviewed, I hear someone stirring behind me. I see Joe sitting at his desk. Fear grips me and I head back to the basement door when Joe stops me.

"It's mostly just me this week. I don't know where everybody fucked off to, but hey, it's your lucky day. How'd you like to review something this week?" he asked.

"Nope, not Guardians. It has a talking animal, remember," he grumbled as he tossed back a tumbler of scotch.

Instead he directs me to the list and points to a movie I've not heard much about called A Man Most Wanted. "Some terrorist movie. Do it up, buddy." he said before settling back into his desk chair, falling asleep while whistling the theme to The Smurfs.

REALITY: Going into this movie I knew literally nothing about it except that it was one of Philip Seymour Hoffman's last roles and was about post 9/11 terrorism. Okay. I am on board. The film, based on 2008 John Le Carre novel, follows Gunther Bachmann (Hoffman) as he heads an anti-terror spy unit based in Hamburg, Germany. They are following two cases that seem destined to intertwine. One is a charismatic Muslim doctor suspected of funneling funds to an Al-Qaeda front and another is a Chechen Muslim seeking asylum in Germany (Grigoriy Dobrygin). As they follow the various leads they interweave with a headstrong lawyer (Rachel McAdams), a reluctant banker (Willem Dafoe) and a representative from the CIA (Robin Wright), all with their own agendas and games to play. 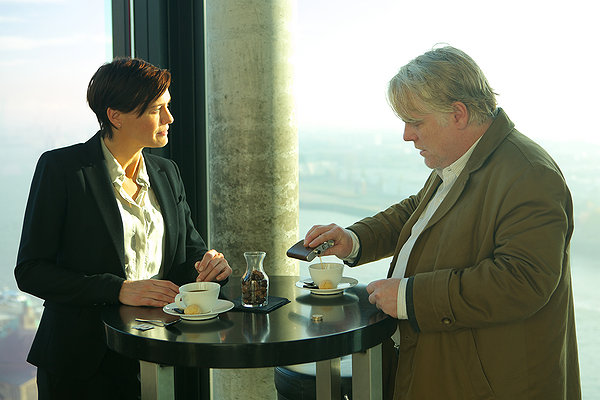 The film is a nice change of pace from the usual garbage we get about terrorists in today's movies. Instead of a jumped up action thriller where we get to show the world that we are better than the terrorists who attacked us, we have a slow, thoughtful thriller that really takes its time to get to know the characters and their situations. The characters meant to be the terrorists are portrayed as flawed humans rather than cartoon monsters, and the people chasing them are shown to be just as flawed, if not more. There are moments when Gunther is kept out of focus and looks disfigured and frightening until he leans closer. In a summer full of big, bang up action movies that amount to very little, this is an interesting little film tucked away, waiting to be discovered.

Hoffman's Gunther is a fascinating character (once you get past his accent, which starts off a little rough) who really wants everyone to win. He knows that the situation isn't black and white and wants to make room for the gray areas to be explored. It's a good last role (before he becomes a CGI ghost in Hunger Games 4.) Most of the cast do good work here, even in small roles. Dafoe is wonderfully befuddled as a Russian banker caught up in the strangeness of the case, and McAdams does fine work as Annabelle, the lawyer who takes it upon herself to save the young Chechen from the people hunting him. One slight issue I have is how they misuse Daniel Bruhl who barely speaks a word and shows up every now and again to remind you he is in the film (and to throw Rachel McAdams in a van). 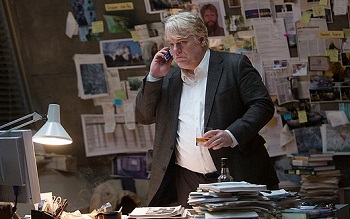 "Thank you for calling Hoffstoppers...I mean CRIMEstoppers!"The real star of the film is the talent behind the camera though. Anton Corbjin has been making interesting films for years, like Control and The American, as well as his enormous collection of music videos where he cemented a signature style. Working with his cinematographer, Benoit Delhomme, he crafts impeccable shots that really sell the dreariness of the spy industry post 9/11. It takes place in the transition between fall and winter and the colors and lighting really give you the sense of the chill in the air. In some ways it feels as if it's an attempt at a modern day Tinker Tailor Soldier Spy, which is mostly because of Le Carre, but it feels almost intentional, and yet never feels like it's ripping off anything, just trying to steer itself in a similar direction.

When a film looks as good as this one does, and features such a talented cast, you are probably expecting something a little more substantial, and to be honest, this isn't that film. It's a quiet little thing where little happens, lots of cigarettes are smoked and lots of coffee and booze are imbibed. In some ways it feels like it's trying to be an old fashioned film noir, but showing that in reality the lives of spies and detectives are not the stuff of action movies, but an attempt to find the truth while jumping through bureaucratic hoops.

If you are at the local cineplex and it has this playing opposite Transformers or whatever other bombastic stuff is there to destroy your synapses, perhaps give this a shot instead. You'll leave with all of your hearing intact, as well as your brain cells.

MINORITY REPORT: It seems like this is the kind of film that will become Hoffman's legacy; small, carefully constructed thrillers that he takes on as vacations from whatever dystopian children's movie he was working on that week. - Joseph "Jay Dub" Wade