Wall Street: Money Never Sleeps; Legend of the Guardians: The Owls of Ga'Hoole

Imagine a world in which all films have really long titles with colons in them. This week, we come one step closer to realising this dream with Wall Street: Money Never Sleeps and Legend of the Guardians: The Owls of Ga'Hoole.

Money Would Sleep if it Could Watch This

EXPECTATIONS: I feel it is important to state that I am a fan of the first Wall Street, and I'd be lying if I said I wasn't looking forward to seeing Michael Douglas return to his famous Gordon Gekko role. That said, I'm not big on unnecessary sequels, especially those that come 20 years later. If ever there were an appropriate time to make a Wall Street sequel, though, this is certainly it. Shia LeBeouf seems committed to stepping up his game as an actor, and Carey Mulligan seems set to become the next big thing, so my general outlook coming into Wall Street: Money Never Sleeps is exactly that of a novice in the financial world: Cautiously Optimistic.

REALITY: Oliver Stone really lets his stylistic flourishes loose here, employing a lot of gimmick shots and sometimes heavy-handed symbolism. He uses city skylines as backdrops for charts and graphs, speeds up and slows down shots of crowns moving to reflect the mood of the scene, and uses shots of characters superimposed to cover up other characters. Every twenty minutes or so, Stone reaches into his cinematic bag of tricks and uses another one. Some work, most don't. It would take multiple viewings of Wall Street: Money Never Sleeps to fully appreciate all of them, and unfortunately, the film just isn't worth it.

The film takes place in 2008, twenty years after the events of the first Wall Street. Gordon Gekko (Michael Douglas) has been out of prison for eight years, and he apparently elected to spend all of that time off-screen. Instead, we get to enjoy the far less entertaining Jake Moore (Shia LeBeouf), a young trader and champion of alternative energies who we're supposed to believe is some kind of savant on Wall Street, despite the fact that he spends the entire movie acting like a naive idiot. Every time he's on screen, LeBeouf looks like a little kid playing dress-up. This makes Moore exactly the kind of mold for Gekko to shape, which is convenient, given that he's dating Gekko's estranged daughter Winnie (Carey Mulligan). As a side note, naming a character Winnie causes people to subconsciously add either "The Pooh" or "Cooper" to it. I chose the latter, because the movie is much more entertaining when you imagine Shia LeBeouf's role being played by Fred Savage. 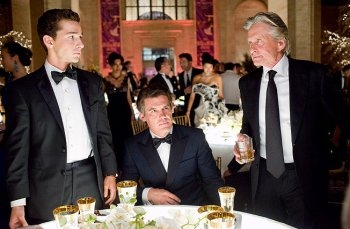 Josh Brolin takes a little nap when no one is looking.The first 30 minutes detail exactly what the fault is in this film. Before we get to any of the conniving and games we're expecting of Gordon and Jake, we first have to sit through tons of back-story, which basically comes down to THE ECONOMY YOU GUYS, AMIRITE: THE MOVIE. Stone's commitment to accuracy is actually a deterrent in this film, because I felt like I needed a handout or a magazine or something to keep up with what's being said on the screen. Unless you've been glued to CNN for the past three years, to the point where you can actually describe the US housing market collapse in simple terms, don't bother, and if you can, what are you doing going to the movies? You're either broke or wanted. In most movies, this doesn't matter, because you're entertained by what's going on anyway. After all, I don't need to be a soldier to enjoy a war movie. But Wall Street 2 is so flat-out boring for the most part that you can't help but feel you'd get more from it if you had a glossary.

Finally, Gordon Gekko shows up and literally takes the stage. Gekko has been relegated to a secondary character in his own movie, so he better make damn sure that he's entertaining. Hell, at this point I'd settle for his bitching about the economy being better than everyone else's bitching about the economy. It is, and so of course we skip right along past it. Jake and Gordon come face to face, and finally the games begin. No, wait, no, they don't. Jake helps Gordon get Winnie back into his life, and Gordon gives Jake advice on how to get Bretton James (Josh Brolin) back for destroying his firm. For the next hour, that's about all that happens. Also, there's a motorcycle race for some reason.

Ninety minutes into the film and the only good thing that has happened is that I'm finally convinced Shia LeBeouf is in fact a decent actor. He shows an excellent grasp on human mannerisms, and he shows real emotion without going overboard. It's one thing to cry when a character is sad; it's another thing entirely to shake only slightly when a character is hiding deep nervousness or to look down and rub one's face when a character is feeling awkward. LeBeouf does all of these, and as a result his character is completely convincing. If only he didn't have to say things like "The only green is money," he might even be likable. Mulligan, too has these tendencies, but because her character direction is "look wispy" for approximately 85% of her screen time, she doesn't get to show it. Michael Douglas has returned to form reprising Gekko, but he is criminally underutilized. This time Gordon's played a little softer, a little more human, like a man out of prison would be. Douglas makes him less antagonist and more anti-hero, and it works. But at the core, he's still Gordon Gekko, and the film conveniently forgets that at times. 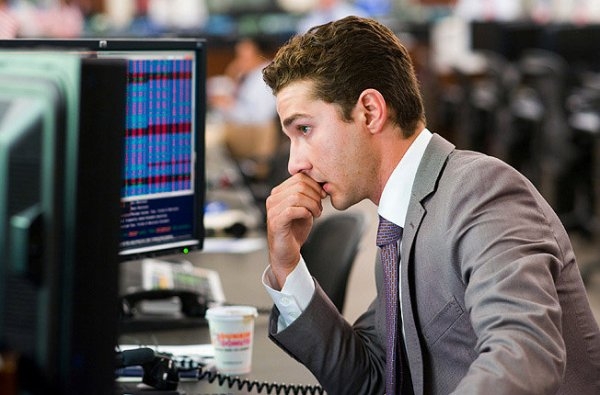 In one particularly nail-biting scene, Shia plays Minesweeper... ON THE HARDEST DIFFICULTY!

This is mostly because the script takes all the subtlety that the actors bring to the table and hurls it out the window. This is a film about greed that names its main character "Moore," and that is the level of self-congratulatory symbolism we're dealing with. (Say it out loud. Get it now?) There are multiple shots of children playing with bubbles, and "bubble" is a financial word the audience recognizes from when the news tells them where their house went! The characters even say it a few times, and then we see it! I get it now! Aren't we all smart? And why stop there, when we can toss in every word we've heard on the news? There's realism, and then there's pandering, and when one character looks directly at the screen and says "We're too big to fail!" followed immediately by another character looking directly at the screen and saying "SOCIALISM," a line has been crossed from one to another. If you took the backroom office scenes from this movie, and replaced the actors with Aasif Mandvi and Rob Riggle, you could do a Daily Show sketch and not change a word of dialogue.

Finally, the movie just refuses to end. Multiple opportunities are given to end the pain, but it just keeps going. Several times Gordon says "Time is our greatest, most precious commodity," but the movie refuses to heed its own lesson, and it even gives us a closing montage of clocks and calenders to make the point. Even after the bad guy gets his comeuppance, even after everyone's arc seems resolved, even after the credits start to roll, there is still unnecessary stuff on the screen. If a damn bit of it were interesting, I might not mind as much. Instead, it got to the point where the film was so tedious, I was genuinely excited to see Charlie Sheen, and that's just not something that should happen.