It's the height of summer, but a low for movies. Joseph "Jay Dub" Wade slays Hercules, Ashley "TwistedLadder" Herald proclaims Lucy the movie of the week by virtue of its weirdness, and Salah "CloseFriend" Abed takes a trip into VOD hell to review The Damned.

EXPECTATIONS: Earlier this month, comic author and world-class grumpus Alan Moore asked moviegoers to boycott Brett Ratner's Hercules. Seemingly baseless claims that the film is both 'wretched' and 'shameful' are bolstered by claims that his friend Steve Moore, who wrote the comic upon which Hercules is based, received zero royalties and a massive cold shoulder from Paramount right up until his death earlier this year. They then began using his death as free publicity. The whole thing sounds pretty brazen, and for once, Alan Moore has a pretty solid point. With that in mind, I'm still of the belief that if any man on the planet can save a project this ill-advised, it'll be Dwayne Johnson. That guy rules.

REALITY: It's kind of amazing that 2014 saw the release of two Hercules movies, and neither one is worth the DVDs on which they'll eventually be printed. Don't get me wrong, Brett Ratner's Hercules isn't without its pleasures, but most come courtesy of the cast chewing scenery like they've been starved for weeks. Most of the film feels like a bizarre throwback to the 1990s, almost as though the whole thing were an attempt to revive the Kevin Sorbo TV series. In fact, that's probably all the review you need. If you can't get enough of '90s nostalgia, Hercules just might be the film for you.

Maybe if I fight twice as hard as him, I too can get armor that covers my vital organs.

Based on Steve Moore's comic series Hercules: The Thracian Wars, this film does indeed follow Hercules and his gang of mercenaries as they go to Thrace and fight in a war. More specifically, Hercules (Dwayne Johnson) is haunted by the death of his wife and children at his own hands, and has vowed to live the rest of his days as a hermit once he raises the money. Enter Ergenia of Thrace (Rebecca Ferguson) and her father, Cotys (John Hurt). They offer Hercules his weight in gold to help them stop warlord Rhesus (Tobias Santelmann) and his army of centaurs from destroying their kingdom.

Is anybody out there still reading? If not, I wouldn't blame you. Nine out of every ten sword-and-sandal adventures are about a cool hero dude agreeing to kill somebody in exchange for a bag of gold coins. Hercules is all about that, too, but it's also about debunking Hercules' heroic deeds. His hype man, Iolaus (Reece Ritchie), regales friend and foe with tales of his uncle's impossible greatness, only for the film to show us how these things 'actually' happened. For example, we all know the story of how Hercules killed the Hydra, but when Hercules delivers the prize to the king of Athens, all we see are severed human heads wearing snake helmets. No one else finds this out, of course, or else the myth surrounding Hercules would collapse like a house of cards. 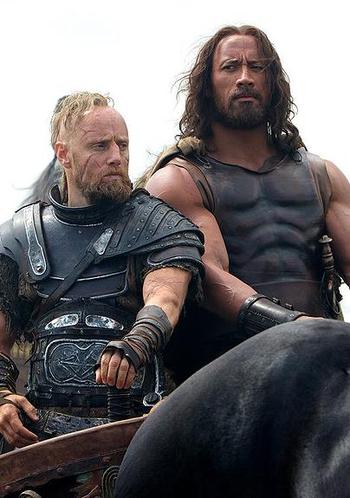 Somehow, pro wrestling was more dignified than this.That's the game Hercules winds up playing. At every turn, it pokes holes in the myths we all learned as children by trying to teach us a lesson about teamwork. Hercules slays great beasts and triumphs over incredible odds, but none of it would be possible without his team lending a hand. Between Hercules' right hand man Autolycus (Rufus Sewell), seer with a death wish Amphiaraus (Ian McShane), archer and token lady warrior Atalanta (Ingrid Bolsø Berdal), and human wrecking ball Tydeus (Askel Hennie), Hercules has a team of specialists that works together to help him maintain his reputation as the son of Zeus. Whether or not he actually is a demigod doesn't seem to matter until the third act, when the film decides it's time for Hercules to knock over a building with his bare hands.

Hercules mixes its messages here. According to the film, a myth is born not out of great, incredible deeds, but out of carefully spun bullshit. Iolaus attempts to sell Thrace's army on Hercules-brand body armor by telling them it's actually indestructible leather from the hide of the Erymanthian Boar. One soldier calls his bluff and asks how he cut it from the boar's carcass if it's indestructible. At a loss for words, Iolaus finally blurts out, "With an indestructible sword, duhhhhh." He's obviously lying, the point here being that Hercules' twelve labors were all smoke and mirrors to help a storied hero appear invincible. Of course, Hercules eventually must reveal that he is superhuman, and that he is capable of all the greatness Iolaus proclaimed. So what is the point, then? If Hercules really is a superhero, why bother spending so much time showing us that he isn't? It smacks of Brett Ratner and his screenwriters' desperate need for their film to be about anything other than a dude crushing skulls.

"The real story behind the myth" is such an overplayed revisionist fantasy card these days, I'm honestly not surprised that Hercules manages to screw it up. Dwayne Johnson and friends go a long way in making the film watchable, but the three big action sequences are all interminably boring. You can only smash so many faces before they start to run together; not even The Rock is immune to a problem like that. It's a shame, because a cast this good really deserves a better $100 million boondoggle.

MINORITY REPORT: If only #twitter existed in that age, #ioalus would have found a powerful platform to forge the #hercules #brand. - Sean "Keanu Grieves" Hanson