The hunt for an East Chicago serial killer serving the cosmic flame monster Tulzscha is heating up. Kurt Cobain's knowledge of the occult, Eazy-E's library research skills, and Lisa "Left Eye" Lopes's computer knowledge have pointed the group to an employee of Jaleco by the name of Timothy Shadow. He has been posting on a BBS as "Fireknight" and offering in-home computer clinics. As we rejoin them, the gang is going to confront Timothy Shadow at the Jaleco Tower in East Chicago. 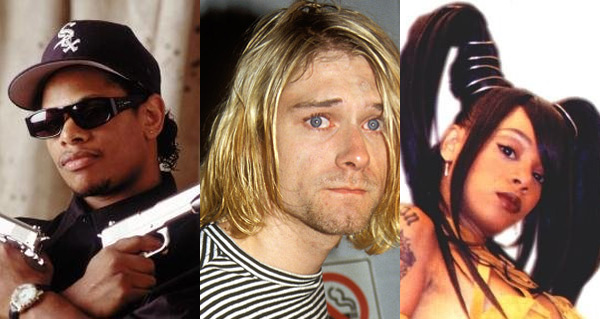 Steve: The weekend is over and after a night filled with nightmares, particularly for Left Eye, it is a bright Monday morning and you are ready to follow up on your lead of Timothy Shadow at Jaleco Tower.

Zack: Kurt Cobain sits up in the crummy motel bed and starts telling E and Left Eye about his bad dream.

Zack: "Aw man, I was at a zoo, only all the animals were people, like my family and stuff, and my mom really wanted out of the otter enclosure, but then my teeth started to fall out and I had an erection. What do you think that means?"

Steve: Eazy-E says it is your fear of failing to live up to your mother's expectations of you and your fear of being trapped by the decisions you make.

Zack: Yeah, like my decision not to bring heroin with us to East Chicago.

Steve: Oh, yeah, you're at like minus 30% on all your skill checks today because you're so sick with withdrawal.

Zack: This is worse than the time Perry Farrell wanted us to wear Pepsi shirts and headline at Lollapalooza.

Steve: Eazy-E thinks that before you go to the Jaleco Tower you should probably get some weapons.

Zack: Kurt has his tonfas and his Bart Simpson figure, but E is probably right. It shouldn't be too hard since we're in Indiana.

Steve: I thought Chicago was in Illinois.

Zack: Chicago is in Illinois, but some of it leaked out of the diaper and into Indiana. That's East Chicago. It's like a cross between a chemical plant and that prison planet from Alien3. Their main export is cheap cigarettes and infant mortality. I'm sure Sufjan Stevens will cover it all eventually. Just give him time.

Zack: The point is, guns are legal as hell in Indiana. Kurt will look up the nearest gun shop in the phone book and call a cab to go shopping.

Steve: Okay, there is a gun shop not far from you. Buck's Guns. Buck is a big hillbilly with a beard.

Zack: E is going to buy a shotgun and saw it down to fit in his Raiders jacket.

Steve: Buck asks him if he's going to use it for gangster banging.

Zack: "Naw man I got to put my racehorse down. Broke his fetlock at the muthafuckin' Preakness."

Steve: What about Left Eye?

Zack: Do they have a flammenwerfer?

Zack: We'll go next door to the liquor store and she'll make some molotov cocktails and put them in a milk crate.

Steve: To take into Jaleco Tower?

Zack: Good point. We'll also buy a baby car seat and put the molotovs in there with a blanket over them. If anybody asks why our baby smells like gasoline it's because he's got ointment on him.