With two damn good films (21 Jump Street; Jeff, Who Lives at Home) headlining the weekend, it's a shame that our attempts to play catch-up were thwarted by the abysmal 1000 Words, in which Eddie Murphy learns to shut up on pain of death.

EXPECTATIONS: The buzz surrounding this film is insanely positive at this point. Films based on old television series tend to range from pretty good to absolutely brilliant, so that's not too much of a surprise, really. I guess you could say I'm cautiously excited for this one.

REALITY: Smartly self-aware and yet deliberately hewing to formula, 21 Jump Street might well be remembered as one of the great comedies of our time. Given the wealth of cinematic tropes upon which it draws, from raunchy teen comedies to explosive buddy-cop action movies, it's amazing just how much it gets right. 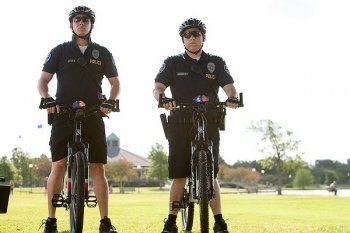 It's like Top Gun, except not at all like Top Gun.On the last day of high school, socially awkward nerd Schmidt (Jonah Hill) and dumb jock Jenko (Channing Tatum) are distraught to find they won't be going to the prom. (Schmidt because he can't get a date, Jenko because his grades are unsatisfactory.) Seven years later, these two opposites become firm friends in police academy, filling the gaps of each other's strengths and weaknesses. After bungling their first bust, they are shipped off to the Jump Street Mission, which assigns youthful-looking officers to work undercover in local high schools. Schmidt and Jenko are sent back to school to track down the source of a new designer drug that is killing school kids.

Most buddy-cop movies would introduce the unlikely pairing with a "meet your new partner" reveal, wherein the tough, by-the-book older officer discovers he has to work with the young, gun-happy renegade. Here, the partnership is one born of a friendship already established. And that friendship is one built on the two character's understandings of each other's differences, the exact same thing that kept them separate in high school.

There's a genuine affection between these two men, and their enthusiasm for their assumed brotherhood is quite touching. Obviously, the film has to have the second-act tension between the two, but its ever-prevailing self-awareness is always on hand to let you know that of course you saw this coming, it's just how these stories are told. They even leave room for an intermission, with a declaration of "And that's the end of act two!" followed by curtains closing.

In an early scene, a police captain laments the lack of creativity inherent in re-introducing a police operation from the '80s. Later, Ice Cube draws attention to the stereotypical nature of his angry black captain character. None of this is Fourth Wall-breaking, though, as much as you might think it is. (Fourth Wall-breaking is a term that is often misused: It refers specifically to characters in plays talking directly to the audience instead of pretending there is a wall between them.) It is all executed quite perfectly in the context of the narrative. 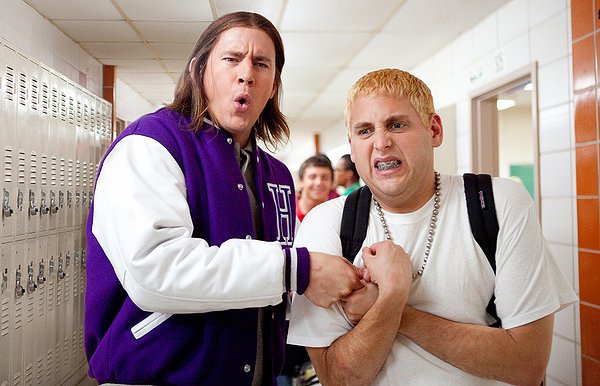 21 Jump Street deals in decades-old stereotypes to establish a comfort level, then disorients its characters -- and the viewers -- once Schmidt and Jenko are actually on the case. In spite of every adult's secret desire to relive their childhood with their newly acquired wisdom, these guys soon find that the world of young people has completely changed. The various social groups in high school have changed: the cool kids are now liberals with strong agendas, and the uncaring meat heads are now seen as socially inept and weird. Of course the roles of the lead characters become reversed, and so Schmidt gets the chance to be the cool kid while Jenko is the outcast forced to hang out with the science nerds.

Very little, if any, of the humour in 21 Jump Street falls flat. This is mostly due to the cast members, who are all terrific. Even Tatum is great here; I think comedy is his calling. There's also the occasional flourish of action, which is both exciting and hilarious. A recurring joke about what should and shouldn't explode is a constant source of mirth and lends itself perfectly to the film's central themes.

All of this, even the self-awareness and the deliberate bucking of trends and cliches while simultaneously embracing them, is here to remind us that times change while our personal expectations of culture do not. In an era where everyone is obsessed with cherishing their childhood and making it an eternal part of their adult life, adapting every comic book into films and petitioning to change the endings of video games, 21 Jump Street is a very simple statement to let us know that we're not the youngest generation and that the next lot is probably going to steamroll us on their way to success. Perhaps it's a point based entirely on personal neuroses, but it's still a valid point well made, that maybe we're the most worthless generation of humans yet.

On a more positive note, it builds on the action-movie expectations of the characters and eventually allows them to become reality, so maybe we're not so doomed after all. Maybe we just need to embrace our stereotypes, so long as we can learn to understand them first.

MINORITY REPORT: I don't know why they keep doing these things, but I hope they never stop. Next summer: Bill Hader and Kal Penn are... Perfect Strangers! And coming in 2014, Say Yes to the Dress, when Seth Rogen and Jay Baruchel become Bosom Buddies!" -Martin R. "Vargo" Schneider