Martin R. "Vargo" Schneider turns down his invitation to the party; Joseph "Jay Dub" Wade refuses to be bought with a free Mazda; and Ian "Professor Clumsy" Maddison decides it's time to retire and move to India. Just another eventful week at the Current Releases office!

EXPECTATIONS: What is this? I seriously have no idea. Here's what I know about this movie:
A) It's shot first-person,
B) It involves a party, and
C) It is not a remake of that movie with Ferris Bueller and the chimpanzees.
That can't possibly be it, right? I mean, I can't find any other detail about this film, so I'm holding out hope this is actually an incredibly well-kept secret JJ Abrams project or something. I want people to start getting murdered by aliens halfway through, just to completely screw with the audience. It seems like everyone in this theater managed to sneak in some booze anyway, so they're not even going to remember what happens by the end of the film.

REALITY: You know how with some movies, like Ocean's 12 or The Tourist, it seems like the entire reason they were made was so the cast could go somewhere and get drunk at the studio's expense? Project X is basically that, except completely honest about it. Yes, this movie is just a giant party with some semblance of a plot tied around it. It's lazy, and it revels in its laziness. It's like someone got the go-ahead to make a National Lampoon or American Pie movie, and decided to spend the entire budget on alcohol, rather than the normally allocated 20%. 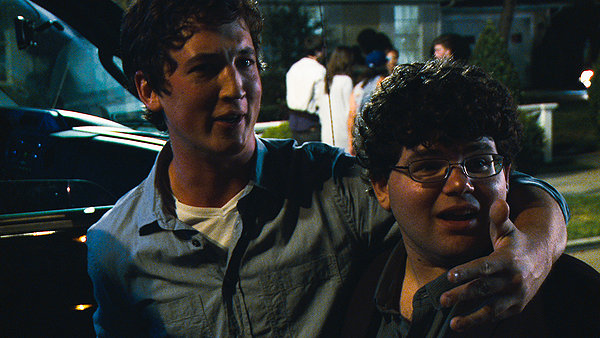 The story, which I have a feeling the studio shoved in there to feel better about the fact that they were basically making a Girls Gone Wild video, follows three high school senior characters that we've seen in every teen movie ever. You have whiny main character Thomas (Thomas Mann), unrepentant douchebag Costa (Oliver Cooper), and dorky fat kid JB (Jonathan Daniel Brown). Thomas' parents are out of town, so of course it's time to throw a party, which of course has more people coming than they intended, because Costa is some sort of social media genius, barring the fact that he's shown to be borderline retarded for the rest of the film. Then they have a party. That's it. That's the movie. And hey, you know what's not interesting at all? Watching other people party. Of the film's barely 85-minute runtime, nearly half of it is comprised of random shots of people making out in seemingly uncomfortable positions and dogs humping faces. If the music were better, this could be a David Lynch film.

In order for this to count as a movie, and to convince the audience to see something they could get from literally thousands of websites for free, the movie tosses in an instantly solvable plot point every few minutes or so. Oh no, someone calls the cops! Oh no, Thomas' real love is his best friend, like in every one of these movies ever made ever! Oh no, the midget from the Pirates of the Caribbean movies is going around punching everyone in the nuts! (Okay, that last one is pretty funny, I'll admit.) Sadly enough, when this movie isn't busy bringing drunk people's Facebook posts to life, it occupies the time by being an incredibly generic teen movie. There are at least two "I love you guys" moments straight out of an Apatow film, except movies like Superbad actually spend time making us sorta care about the characters first. One of these moments involves Costa and Thomas jumping into bed together while R. Kelly's "Bump and Grind" plays. I expected at least one person to look into the camera and say "No Homo!" 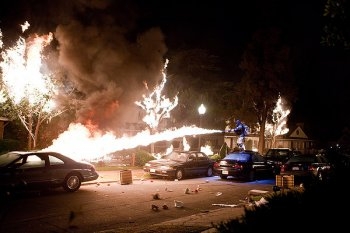 What is this, an episode of Top Gear?Speaking of the camera, I want it known that I am in no way opposed to the first person/found footage trend in cinema. It can do a lot of good in a movie, particularly when it calls into question who found it and why it was released, like The Last Exorcist, or when it serves the tone of the film, like Blair Witch Project or Cloverfield. However, there's almost always a reason for this. When you make the camera into a character (in this case the camera's name is Dax), you bring up issues that must be addressed. Like, why does no one care that Dax is filming with his giant camera in the boy's locker room? Why does this kid keep trying to film his friends having sex? It's a pretty good commentary on the audience's growing desire for realism being a growing sign of acceptable voyeurism, but then the movie ruins that by changing the cameraman constantly, putting Dax in the shot, or by having the camera keep going when Dax is nowhere around. I don't care if District 9 switched camera styles halfway through, movie. You did not deliver on the aliens that you in no way, shape or form promised me, so you do not get to be District 9!

I will give the movie this, though: at one point in time, it goes into full-on meltdown mode, and it is as bizarre as it is beautiful. When the party erupts into an all-out riot, it becomes this surrealist nightmare about the terrible destructive force people in search of a desperate high can be. We flash past the faces of people looking like the walking dead as full-scale anarchy breaks out. There are even news reports playing like an apocalypse movie. A guy with a flamethrower comes out of nowhere. For the first time in all of its trying, the movie draws us into the events, because the supposedly sober audience is now experiencing the "whhaaaatt am I even looking at" feeling one gets from drinking too much and doing other illicit things at a raging party. It's too bad that this wonderful fever dream is so short-lived, and instead we literally black out and get the incredibly boring recap of the next day. What are you trying to say here, Project X? What are we to take away from all of this? Is it that "Parties are Awesome?" Thanks. I'm glad I spent eight bucks for that, instead of just reading Andrew WK's Twitter feed.

I may be being too hard on the movie, but it's hard to get excited about what are essentially home videos of the awesome party that you weren't invited to. If you're the type of person who is inclined to enjoy stuff like this, wouldn't you be better off, I don't know, having a party? If this is a movie where your best option is sneaking alcohol into the theater to enjoy it, then why bother? (By the way, people behind me, I'm sure your friend Jeff is an asshole, thanks for reminding me of it every single time Costa was onscreen!) By the way, I had no other place to put this, so here it is: The best part of the movie is when Footloose's Miles Teller shows up playing himself, and no one but me says "That's the dude from Footloose!"

MINORITY REPORT: That moment when things get a little hard to keep track off before everything goes black is always the most liberating. Unfortunately, the blackness often makes it very difficult to explain the bodies and the blood and the screaming and the knives and fires... - Montague "Legally Sane" Smythe