EXPECTATIONS: Sofia Coppola is an interesting director who makes increasingly boring films. The Virgin Suicides is a good film; Lost In Translation has its moments; and her filmography slowly dodders into inanity from there. Despite this, I am optimistic about The Bling Ring, if only because the last two "This is a True Story" films based on magazine articles were both incredibly good. Knowing Coppola, this one will revolve around the ennui inherent in being ridiculously wealthy and good-looking, but everything about it is giving off a real Spring Breakers-esque vibe. (Indeed, both films come from the brand-new indie distributor A24.)


REALITY: People make films about actual events so that a lot of people can hear a story without having to do any actual research. We assume the filmmakers have looked stuff up so that we don't have to. (They usually haven't.) It is the job of the critic to bring things to light that a filmmaker might know but an audience doesn't, so we assume they've done their research as well. (They definitely haven't.) Nobody likes their movies to come with homework assignments, but occasionally background information reveals some key piece that enhances the film experience. The Bling Ring is a great film in its own right, and you certainly don't have to know anything about the celebrity-home crime spree to like it, but learning the level of detail Coppola put into it elevates my respect for it greatly. 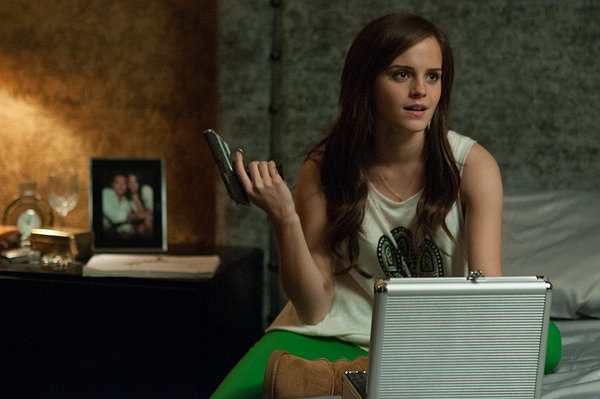 Defending your second amendment rights and blogging about it.


Bling Ring is told mostly from the point of view of Marc (Israel Boussard), a lonely gay teenage boy who takes multiple prescription medications. Marc finally makes a group of friends when he meets Rebecca Ahn (Katie Chang) at an alternative education school after they've both been expelled from public school. Rebecca brings Marc into her world of vapid Beverly Hills partying and shallow celebrity idolatry. Bored with all the nice cars and expensive nightclubs, Rebecca takes to stealing things from people's cars for fun, eventually raising the stakes to houses, and then eventually to the homes of celebrities, using tabloid sites to know when they're out of town, and Google Earth to find a way in.


At this point, they're joined by hard-partying adoptive sisters Nicki and Sam Moore (Emma Watson and Taissa Farmiga) and by Chloe (Claire Julien), who is, I guess, supposed to be the "bad girl" of the group, even though none of them are particularly good? In any case, the crew begins to rob celebrity homes, using Paris Hilton's house as a sort of favorite hang-out.

The use of Paris Hilton as the main target is particularly interesting, because these teenagers are stealing out of boredom and a sense of entitlement. All of them are wealthy on their own, driving Audis and Lexuses (Lexusees? Lexii?), but none of them have earned any of it; they've never worked for anything in their lives. The people they're stealing from (like Orlando Bloom and Megan Fox) might not be the most prolific or humanitarian of celebrities, but they've all at least done something to earn their money, thus putting me in the unique position of defending the merits of Orlando Bloom and Megan Fox.


The Bling Ring hangs out in the same clubs as people like Kirsten Dunst, but they're not on that level, inside their circle, nor have they done anything to deserve to be. All of the targets are people who have worked to be famous... Except for Hilton, who has basically been a teenage girl with a Lexus her whole life. Paris is their favorite target to live vicariously through, because she's the one they're most like. This is a particularly interesting story coming from Coppola, a woman who, despite all her accomplishments, will always live with accusations that she never would have started in Hollywood without Daddy.

The thing is, Sofia Coppola did not make a conscious decision to have the Ring use Paris Hilton's home as a rallying point; that's literally what happened. The accuracy of this portrayal is startling, and it accounts for some of the film's only flaws. My largest complaint with the movie was that it seemed to drag on too long in the middle, too much time going by without anything really happening to these kids. However, that's easily explained by the fact that in real life, these kids were allowed to continue on like this for a mind-blowingly long amount of time. That it happened once is surprising enough; that it continued for almost an entire year is staggering. 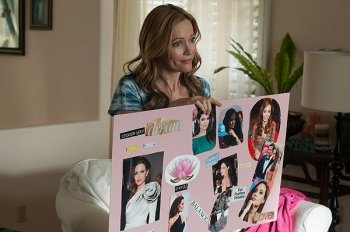 In fact, for most of the film, everything the Bling Ringers do is completely without consequence. Chloe is T-Boned in a drunken-driving accident with Marc in the passenger seat, and she walks away without a scratch. Ten minutes later, we're in the exact same shot, with Rebecca in the passenger seat.

The Bling Ring is the latest in a long line of films we've seen this year that revolve around people who believe their money and stuff makes them invincible. However, in this case, the same line of thinking applies to the victims. They don't even really need to break into Hilton's house, because the key is under the doormat. (The real Paris left the door unlocked.) 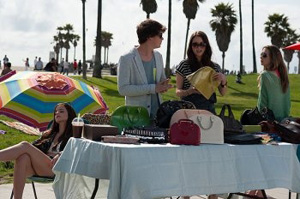 With actual events guiding the storyline, Coppola is free to focus on her strengths. As with all of Coppola's films, the sense of style shown here is astonishing. One shot in particular follows a break-in through multiple rooms, in complete silence, without moving the camera, which is located outside the house. It's either one amazingly well-choreographed single take or a masterwork of editing, but in any case, Coppola's talents at arranging a shot are in full display along with those of the late Director of Photography Harris Savides.

Also like most of Coppola's films, The Bling Ring has a soundtrack that serves well to complement the themes of the film. MIA and Kanye blast out the joy and struggle of money and power, and Frank Ocean's "Super Rich Kids," which plays during the end credits, is a perfectly chosen closer.

The cast is uniformly impressive, but the real standout here is Watson, who borrows lines verbatim from her character's inspiration, Alexis Neiers. (By the way, Neiers' Wikipedia article opens with: "Alexis Christine Neiers (born June 20, 1991) is a television personality, aspiring model, and convicted felon." I am not making this up.) Watson is a dark comic genius, never taking Nicki to a point of parody, but instead playing maliciousness at its most glassy-eyed and ignorant. Nicki is self-centered to the point of obliviousness, and Watson gets it. She delivers the most shallow and stupid lines with such sincerity that you start to understand that Nicki really believes everything that comes out of her own mouth.

During my Wikipedia-intensive research for this article, I also came across this quote from a prison coach (which is apparently an actual job that exists) regarding Rachel Lee, the real-life counterpart to Rebecca Ahn: "To be honest, Rachel has a learning disability, she doesn't have a particularly high IQ, and I find it hard to think she could have been the one to instigate the whole thing."

Now, I found that quote in two minutes, so it's pretty easy to imagine Coppola and actress Katie Chang were aware of it too. I realize that the line is a crappy defensive lie, but it made me wonder if maybe, just maybe, Chang was bringing some of that concept to the performance of Rebecca. In fact, Chang seems to play Rebecca as not just possessing a learning disorder, but also possibly being somewhere on the Autism spectrum.

The truth is, every character here is presented as being so oblivious and unable to connect with what's around them that it would be easy to believe at least one of them had a medical reason for it. And if this is true, it makes Rebecca the most sympathetic character here. I'm not sure if Sofia wanted me to just be interested in these spoiled shallow kleptomaniacs or to actually feel for them. If, and that's a big if, she was trying for the latter, she failed. But by any other standard, The Bling Ring is a massive success.