EXPECTATIONS: I hadn't seen the first Despicable Me until very recently; I found it to be a delightful film with a sweetness to it that most animated films these days just don't bother to include. This was a film that not only cared about its characters but also how the families in the audience might relate to those characters. However, Despicable Me 2 is very much marketed toward fans of the yellow tic-tacs in dungarees who fall over and giggle a lot, rather than the fans of the actual interesting characters in the first film. Basically, they're leaning heavily toward the dumb kids who love films that end with dance parties and will make you watch this on DVD every single day. Buy our toys. Yellow oblongs with goggles. McDonald's. Marketing. Consume. 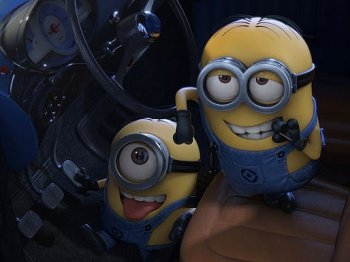 REALITY: Oh boy, was this a major misstep. You remember how the first film was full of positivity about single-parent families and adoption? You remember how Gru, the protagonist, redeemed his life of over-the-top criminality by building a strong foundation for the futures of his new daughters? Remember how interesting his adopted daughters were as characters and how they informed his personal arc?


Well, forget all of that. Despicable Me 2 is what happens when some executive at Universal looks at Despicable Me and is outraged that these children don't have a mother. "Don't you know what's going on out there!?" he wails, "Gays are getting married! To each other!! We can't have children thinking their lives are normal and okay when they are A TRAVESTY!!! So make a sequel where they get a mother and everything is returned to heteronormativity." You could call this another Mars Needs Moms, but I don't think it's necessarily that bad. It's just blindly regressive in comparison to its predecessor.

Gru (Steve Carell) is back, along with his three adopted daughters Margo (Miranda Cosgrove), Edith (Dana Gaier) and Agnes (Elsie Fisher). While celebrating Agnes' sixth birthday, Gru is accosted by Anti-Villain League agent Lucy (Kristen Wiig) and her boss Silas Ramsbottom (Steve Coogan), who twist his arm until he agrees to help them track down the villain who has stolen a serum that transforms any living creature into a mindless killing machine. With Dr. Nefario (Russell Brand) seeking alternative employment opportunities, Gru has to figure the plot out by himself. He eventually whittles the trail down to the main suspect El Macho (Benjamin Bratt), a retired villain who once faked his own death by riding a shark covered in dynamite into a live volcano.

The plot looks simple on paper, but they drag it out elaborately. Rather than letting the ideas play out on screen, we're fed plot developments in sporadic chunks in between what could best be described as zany antics or wacky hijinks or some combination of the two. So much of the film is essentially filler in which the gibbering minions hit each other. They're funny, for the most part, but their constant screentime starts to grate after a while.


I know a lot of people love those little things. They're certainly popular with the kids, and it's no surprise that there's a spin-off on the way next year starring nothing but minions. But for me, anything more than a few seconds of watching one of these urchins hit another one half-deliberately just doesn't work. These aren't characters who can really carry a feature, and yet I'm pretty sure they monopolise more than half the running time of this one. 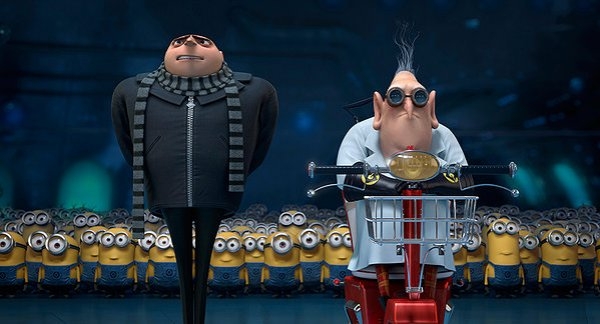 Two characters who aren't yellow. How did they get in here?


Even when the minions aren't on screen, the film is extremely preoccupied with extended scenes of slapstick. Now, ever since my mother explained to my much younger self that the robbers in Home Alone 2 would most certainly have died after being beaten, crushed, immolated, electrocuted, blown up and dropped from several storeys, I have found this kind of consequence-free violence to be just plain weird. I'm not saying we need to tone this stuff down or even that it isn't funny, but there's a gleefulness in committing extreme violence upon somebody's person from which they will definitely, but impossibly, recover.

In the first Despicable Me, there was an instance in which the film's main villain is crushed into a pulp, says "ouch," then carries on regardless; other than that, it's relatively free of that kind of stuff. This film has a scene in which Gru goes on a date and the young lady who accompanies him ends up drugged, dragged, thrown from cars, clattered into trees, flattened and finally abandoned on a doorstep. Why? Because she was a hypocrite. She called Gru out on being a supposed phoney while her own behaviour suggested that she was the phoney. With the magic of cartoon violence we can enact terrible fury upon her and have her learn from it!

Imagine if Arnold Schwarzenegger had thrown a pipe through Vernon Wells' chest and Wells had just gotten up and said "well, I sure learned my lesson" then went home to eat some cereal? Cartoons do that all the time. After all, how many times was Tom shot directly in the face by Jerry with no injury caused? How many times did Wile E. Coyote get blown up and sent plummeting from ridiculous heights? The trend was so perfectly parodied in The Simpsons with the "Itchy & Scratchy" segments (where the cartoon mouse would commit actual bloody murder on the cartoon cat for the simple crime of wanting to eat) that all modern incarnations can only be viewed with that in mind. 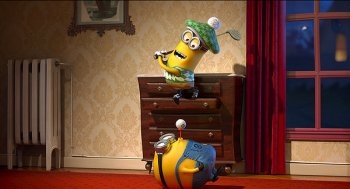 Ah, now this is more like it!Despicable Me 2, though, is weirdly aggressive with its slapstick violence. Generally, cartoon logic operates in a world without death or prison. The children in the audience become implicit in the narrative; it's their laughter that ultimately waylays the villains, who are then humiliated into changing their ways. The date sequence in Despicable Me 2 takes things way too far. It feels angry, like when an old man is telling a story and suddenly starts shouting because he just remembered that his story has a Jew in it. This onslaught of misdirected rage out of nowhere hangs over the rest of the film like an angry shadow.

But, that isn't even the main problem I have with the film. One of the best things about Despicable Me was how positively it portrayed the single-parent situation. The kids were great characters, infinitely cuter and funnier than the minions, and they were really the heart and core of the whole first film. Here, they seem like an afterthought. Margo has a boyfriend who turns out to be the villain's son, but this subplot ends with an abrupt whimper. Meanwhile, Agnes spends the film wishing she had a mother, and Edith is basically demoted to "the other one." They just couldn't think of a single thing for her to do, yet they filled half the film with yellow pustules hitting each other.


Why is Agnes pining for a mother? Because some exec decided these girls needed a female role model in their lives, I presume. I seem to remember there was a grandmother on the scene one film ago, notable by her absence here. Just pretend she doesn't exist. Kids watching these films want to be able to relate their home lives to the characters on screen. How many children will suddenly feel that their lives are abnormal because they don't have two parents (or parents of opposite gender) after this film essentially tells them as much? What stuffy old bollock decided that would be a good idea? Let's take a massive step backward with this sequel and undo all of its positivity and progressiveness while we also remove most of the charm!

This is pretty much what happens when a good idea becomes a successful product, I guess. Your focus changes from finding an audience that will relate to your characters to simply finding the largest audience you can. Gotta sell those Happy Meals, after all.

MINORITY REPORT: It seems odd to me that a movie all about heteronormativity and also about the minions fails to explain the biggest mystery of Despicable Me: What gender are these things? Do they even have gender? Are they capable of reproduction, or is that done through fission and sporulation, like fungi or Tribbles? These are the questions that keep me up at night. - Martin R. "Vargo" Schneider