The Master; The House at the End of the Street; End of Watch

EXPECTATIONS: Heralding the end of The Watch's disgraceful run in theaters is the aptly named End of Watch. Poetic irony aside, I'm looking forward to seeing the found footage style branch out into other film genres. It's a style that lends its (usually fantastical) subject a touch of humanity, and in the age of reality television, I'm actually surprised that found footage films have been so slow to catch on. The handheld approach should at least make for some intense action sequences.

REALITY: In many ways, End of Watch is the episode of "Cops" that people have been waiting to see for the past twenty years. No matter how interesting a domestic dispute or traffic violation might be, we're always secretly hoping for a routine call to turn into a nasty siege by some local gangbangers. End of Watch certainly delivers that, but more importantly, it delivers a surprisingly deep relationship between two young cops. It's a real "come for the action, stay for the acting" kind of affair. 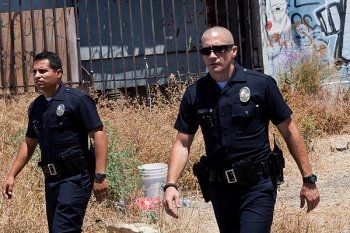 Cool action cops!"Once upon a time in South Central," as the opening title card reads, police officer Brian Taylor (Jake Gyllenhaal) is documenting his day-to-day life for a filmmaking class. Taylor and his partner Mike Zavala (Michael Peña) patrol the streets of Los Angeles answering noise complaints, saving lives, and investigating missing person reports, all while driving around discussing their significant others. Mike and his wife (Natalie Martinez) are about to have their first child; meanwhile, Brian develops a relationship with a grad student named Janet (Anna Kendrick). When Taylor and Zavala stumble across a Mexican cartel's secret operation, a bounty is put on their heads that threatens not only themselves, but also their fellow officers.


End of Watch plays fast and loose with its found footage gimmick, but it works for the most part. It incorporates dashboard cameras, helicopter footage, and clip-on mini-cams to fully capture the world of South Central LA. When both Gyllenhaal and Peña need to be in the same shot, director David Ayer has no problem dispensing with the gimmick so that both actors can get in on the action. Not only does Officer Taylor film himself constantly for his unseen filmmaking class, but we also get to see footage culled from the other side of the law. Mexican gangbangers film themselves committing drive-by shootings and planning other crimes, such as how to collect the bounty on Taylor and Zavala. How the LAPD gets a hold of this footage and why it gets edited into Taylor's final project are both mysteries. (Wouldn't Taylor's professor take off points for using someone else's work?) They're also beside the point.

Every cameraman in this film is trying to record how cool he is for posterity, almost as though they all realize how interchangeable they are in the grand scheme of things. Taylor is constantly reminded by his superiors just how easily the LAPD can find a new officer to take his place. "I was here, this was my story," seems to be the MO of the characters in this film. It's what motivates most people to pick up a video camera; with seven billion people living on this planet, it's easier than ever to get lost in the shuffle. I'm willing to bet this is Taylor's fascination. He claims filmmaking is simply an elective class, but instead of cherry-picking a few moments on the job, he films his every waking moment. Taylor wants it known that his was a life that mattered, and Jake Gyllenhaal plays that existential anxiety beautifully. 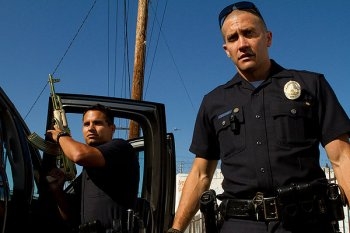 Striking cool action cop poses!Gyllenhaal and Michael Peña build the sort of rapport as actors that every filmmaker begs for. They're more than patrol partners; they're best friends, they're brothers. Taylor and Zavala rib each other about girls, work, life, and anything to get under each other's skin. Most of the film's big scenes are punctuated by brief moments of the two cops giving each other hell just for the fun of it. The effect is very humanizing, and consistently hilarious. For as grim as much of End of Watch tends to be, the scenes of these two cruising around town and bullshitting with each other are some of the funniest (and sneakiest) bits of character development this year has to offer. These crucial scenes give the ending emotional weight; without them, the finale would be meaningless.

It would be an understatement, though, to say that End of Watch is simply a well-rounded character study. The film has character and heart for miles, but when it comes to a compelling plot, that's what the film ultimately falls a bit flat. The advertisements sell End of Watch as a film about two cops who run afoul of a drug cartel's plans and must shoot their way to freedom. While this isn't exactly a lie, this happens at the end of the film, after we've already witnessed a solid 90 minutes of rich character development building to some unforeseen conclusion. Once the actual plot kicks into gear, the film is practically over.


End of Watch is much more concerned with building believable characters than putting them through a labyrinthine story. I suppose what I'm really saying is that the story you're being sold isn't quite the story you'll be getting. The final product will stand perfectly fine on its own as a compelling recruiting tool for the LAPD, but waiting for End of Watch to take a Chronicle-esque turn toward the more garishly cinematic is a fool's game. It closes precisely as it opens, as a feature-length episode of "Cops" with infinitely more character development and uncensored swearing. Viewer discretion advised; check your local listings.

MINORITY REPORT: He may receive second-billing, but Michael Peña is the real star of End of Watch as a cop who buries his insecurities and fears under a razor-sharp sense of humor. At this point in his career, writer/director David Ayer is capable of making intense and bruising cop dramas; after all, he wrote Training Day. But Peña's witty banter and lived-in relationship with Jake Gyllenhaal, combined with the film's surprisingly nuanced attitude towards cops, elevates End of Watch to greatness. This is the Platoon of cop thrillers, minus the ham-fisted moralizing. - Sean "Keanu Grieves" Hanson