Men in Black III; Chernobyl Diaries; Get the Gringo

EXPECTATIONS: The idea of a horror movie set in Chernobyl actually excites me. In many ways, the Chernobyl meltdown, and atomic power in general, represents one of the scariest ideas in humanity: The idea of massive failure. We fear nuclear energy because it's proven itself to be more powerful than we can handle in the past, and even dealing with it now comes with its own shades of arrogance. Because the only thing anyone's saying about this movie is that it's "FROM THE CREATOR OF PARANORMAL ACTIVITY," the question becomes "Do I trust them to explore this idea?" Given the most recent trends of horror films, I'm expecting this to be a whole lot of nothing happening that we all pretend to love afterward because all our friends are doing the same thing. (I did not like Paranormal Activity.)

REALITY: Sometimes I see a movie that surprises me by doing exactly what I was hoping it would. Chernobyl Diaries is... almost one of those movies. At the very least, it managed to be interesting, which more than I can say for the last pseudo-Russian horror movie I watched. 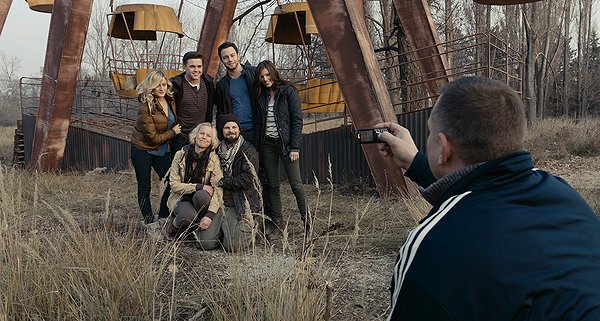 
Chernobyl Diaries is easy to dismiss as generic at first glance, and it seems to know it. The opening scenes bring out familiar tropes and archetypes. We're following some pretty young people trekking through a foreign land, including our straight-laced protagonist Chris (Jesse Mc.... Seriously? Jesse McCartney?) who is bringing his girlfriend (Olivia Dudley) and her friend (Devin Kelley) to see his Bradley Cooper-wannabe brother Paul (Jonathan Sadowski), who is a screw-up. We know he's a screw-up, see, because they explicitly say so in the first ten minutes. Every line in the first act is awkwardly handled exposition, along the lines of "Here we are IN RUSSIA. It is great to be IN RUSSIA with you MY BROTHER WHO LIVES A LIFESTYLE OUR FAMILY DISAPPROVES OF. Isn't that right, LONGTIME GIRLFRIEND I WISH TO PROPOSE TO?"


Paul meets up with Uri (Dimitri Diatchenko), a former Special Forces soldier who runs an extreme tourism business, and he agrees to take our heroes (along with two more people who literally show up to be extra bodies) into abandoned city Pripyat, where the workers of Chernobyl lived with their families. ("CHERNOBYL. Where the NUCLEAR DISASTER happened? LET ME EXPLAIN WHAT CHERNOBYL IS.")

Of course, the group is stranded in the city, and then: Not a whole lot happens. There are plenty of subtle clues that the group is not alone, but apparently the film decided that being obvious was for the first act. There's also one of my favorite fake-out scares of all time, wherein a loud noise turns out not to be a crowd of mutant zombies, but rather a bear. Of course this means, wait, crap, we now have to deal with a bear! However, what I want to address here is that director Bradley Parker is smart enough to let us be scared in our own minds, rather than show us the scary beings. There's an incredibly small amount of blood and gore in this movie, and most of the violence actually takes place off screen. This isn't the kind of horror movie that will make you check behind the door before you go to bed. It's kind of barely a horror movie at all. In fact, we don't even really understand who/what the antagonists are until the beginning of the last act, which is nice for a movie that has spent this time over-explaining everything. 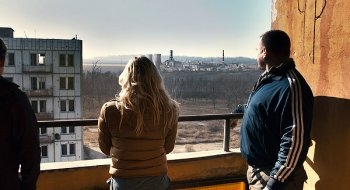 Not the best view in the world, is it?As far as that statement I made about Chernobyl representing mankind's greatest failure in the beginning, the movie works with that to an extent. I'm not a master of film language like The Professor is, but I'm going to take a stab at it here. One of the more interesting parts of the film is that, for being committed to horror movie tropes, every person in this movie has a sane and rational reason for everything that they are doing. In fact, given their situation, everyone takes the most logical course of action in every situation, meaning that, just like in the explosion of a nuclear reactor, sometimes things just go wrong. There's a real "Pavement on the path to hell" theme pervasive through the entire film.

I also want to draw attention to the recurring use of cameras.At every moment up until the horror part of the movie kicks in, a character is taking a picture, or talking about taking a picture, or making a video, or something of that nature. Cameras are devices we use to look at ourselves or our world, specifically, to look at the way things were at a specific moment in time. The photographs are like the city of Pripyat itself, eternally trapped at one specific point in time. Now, what's interesting about this is that this movie was partially written by a man whose biggest claim to fame is in the "found-footage" genre, where he basically said "Look at what these (fake) people were like at this point!"


There are elements of found-footage in Chernobyl Diaries, including what I think might be the first time we've actually seen people FINDING the footage. But for the most part, it's done in what I'll call "standard movie time," meaning we're to accept these events as they're happening. It's not looking at something that's trapped in time anymore, it's something happening as it happens. We've made a change in the process of time, just like something has happened to change the eternal frozen nature of Pripyet. Uri is constantly saying "That's not normal. This never happens." What this means, I'm not really sure. I just know that in this movie, two characters take a picture in front of a nuclear reactor and one of them explicitly says, "There's a METAPHOR happening here, you guys," and that has to have some kind of significance.

Unfortunately, the film never really gets to explore these concepts because it's ultimately too short. Once we hit the third act, everything rushes to the finish, leaving a product that's going to be ultimately unsatisfying to a lot of people. Horror fans will be disappointed that the movie isn't particularly traditionally scary, and people like me will be left thinking "That's it? You were just about to say something!" It's a bit of a letdown, I'll be honest, when the last twenty minutes of the film are basically two people running around in the dark, to the point where the audience can't even see them running. There are a lot of good concepts in Chernobyl Diaries, but the execution is weak and unprepared. JUST LIKE NUCLEAR ENER....No, I'm not saying that.

MINORITY REPORT: "...a master of film language" is what I'm getting carved on my grave. Now all I need to do is die. - Ian "Professor Clumsy" Maddison