Men in Black III; Chernobyl Diaries; Get the Gringo

EXPECTATIONS: Mel Gibson. Is there a name that conjures up a more immediately hateful response from people? These days, Gibson is more famous for being a big racist bastard who's quite possibly mentally ill than he is for his acting. Personally, so long as Gibson keeps acting, I'll keep watching, because even in irredeemable crap like The Beaver he proves himself to be a genuinely great actor. For this reason, Get the Gringo (or How I Spent My Summer Vacation as it is known in the UK) is definitely a film I'm excited to see.

REALITY: While not without its issues, Get the Gringo is a well-paced and amusing film that might finally remind people that Gibson still has the talent and charisma to be a movie star if we can just ignore his personal problems. The problems of this film, however, cannot be ignored, but the good stuff far outweighs the bad. 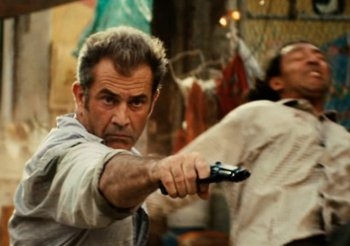 Yeash, sideways gun action! Just like real life!The film opens with two men in clown masks making a high-speed getaway with a car full of stolen money. One of them has been shot and is bleeding to death on the back seat while the driver (Gibson) ramps over the Mexican border, wrecking the car and landing in the hands of corrupt Mexican police. These police decide to send this Gringo to the bizarre prison town La Pueblita without charges or a trial. The Gringo uses all his skills to get himself out of La Pueblita and get his money back before the man he stole it from (Peter Stormare) tracks him down and forcibly removes his toes.

We've seen all this mysterious, hilariously over-competent action hero malarkey before, but Gibson makes it incredibly compelling, funny and empathetic without ever feeling inconsistent. In fact, we get to know this character so well through Gibson's acting prowess that even the most unpredictable and outré moments become completely believable and acceptable because we believe him. You could almost say that he's too good at times, as a late scene in which he seems to be in the middle of a sudden dilemma feels more like filler than actual drama, because we know exactly what this character will do.

Director Adrien Grünberg, here making his feature film debut, shows some stylistic flair but seems to struggle in finding the right tone. At times, Get the Gringo is incredibly gritty and grounded, while at others it is a wacky action comedy. Luckily, the pace never lets up and the camera rarely leaves Gibson's side, which means it all somehow works. Everything just clicks into place whenever it needs to.

Get the Gringo is almost entirely told from The Gringo's viewpoint, with the camera rarely leaving Gibson's side. We observe what he observes and we learn what he learns and we later begin to question his reliability. The real twist of the narrative is that Gibson befriends a young boy (Kevin Hernandez) and his mother (Dolores Heredia) in the prison, which allows inmates to pay to have their families moved in. This boy is the only blood match for crime kingpin Javi (Daniel Giménez Cacho), who is in imminent need of a liver transplant. This is where the film draws most of its drama and suspense from, keeping The Gringo bound to an emotional motivation as well as one of personal gain. 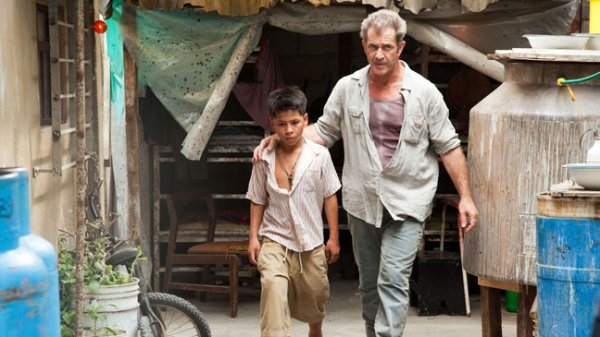 I think they really miscast the new Murtaugh for Lethal Weapon 5.


The only real issue with the film is a completely unnecessary voice-over narration that fills us in on what is going on. The thing is, the film is so well visualised and Gibson's central performance is so strong that we are never left wondering what is going on. I imagine the only reason they included the narration was to keep fresh in our minds how witty and amusing The Gringo is, seeing as he spends a great deal of the first act not engaging in any dialogue.

This is how you do a comeback, Mel. Not by starring in depressing family "comedies" about suicidal dads using puppets to connect with their families, but by getting a wild and wonderful script and a new director you can manipulate. We need Mel Gibson on our cinema screens, he needs a vehicle for his talent. I don't care how crazy he is in real life: In the movies, he is a magnetic and electrifying presence, elevating everything he touches. I want to watch him act every damn day, to Hell with his personal life. History won't remember that, it'll remember his works.

MINORITY REPORT: Wait... Mel Gibson in a Mexican prison!? Sometimes there are so many jokes, there might as well be none at all. - Martin R. "Vargo" Schneider