EXPCTATIONS: This movie exists for a reason; somebody decided this would be a good idea. But whom? The statute of limitations on blaming Twilight for every fantasy rehash has pretty much expired, and surely it didn't take ten years for someone to try and copy the Van Helsing formula. I'm all out of ideas here, guys. Hansel & Gretel: Witch Hunters is a real movie and I don't have the foggiest clue where the hell this idea even came from. Is this somehow my fault? Did this film come about because of something I did? Am I secretly Tommy Wirkola? I demand answers!

REALITY: We're only human; each of us has had our fair share of stupid ideas. When I was 17, I thought Army of Darkness was the coolest thing in the world. With zero money and zero understanding of how movies are made, I decided to try my hand at a short film about Beowulf. Thankfully, my mother recorded over the final product with a real movie shortly thereafter. That Hansel & Gretel: Witch Hunters didn't meet a similar fate is one of 2013's first great tragedies. 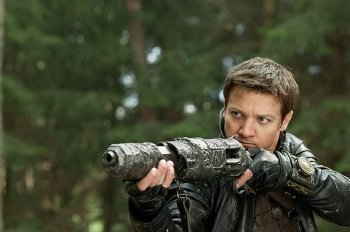 What exactly is that thing you're holding, Jeremy?The film opens with the tale we've all heard before: Young Hansel and Gretel are left out in the woods by their father, where they encounter a witch in a house made of candy, and burn her alive in her own oven. Fast forward some twenty years, and now Hansel & Gretel (Jeremy Renner, Gemma Arterton) are world-famous witch hunters. They are hired to save a village besieged by a witch (Famke Janssen) and her minions, who are busy rounding up children to sacrifice on the upcoming night of the Blood Moon. Along the way the pair meets a belligerent sheriff (Peter Stormare), trolls, good witches, bad witches, and one witch who looks exactly like that four-armed thing from Wrath of the Titans.

Much as with my own ill-fated filmmaking venture, director Tommy Wirkola (of Dead Snow fame) draws his aesthetic from Sam Raimi's Evil Dead films. The witches are dead ringers for Raimi's "heinous horror hags"; the gore is cartoonishly over the top; set dressing seems to explode completely at random; and the two leads spit their lines with such sarcasm that it might actually be genuine contempt for the material. Hansel & Gretel is clearly trying to be the next Army of Darkness, yet it has no understanding whatsoever of what makes that film tick, and why people continue to adore it.

For starters, Hansel & Gretel is littered with anachronisms that serve no real thematic purpose. The heroes' arsenal includes rapid-fire crossbows, pump-action defibrillators, and a mini-gun that fires god-knows-what; none of these exist for any reason beyond "they looked cool, so why the hell not?" Sam Raimi did it because he was goofing on a Mark Twain story; anachronisms were half the point of the whole damn movie. Here, there's nothing remotely that clever, and nothing to suggest anyone bothered reading the Grimm Bros. story before vomiting up a bunch of rock-headed sight gags. 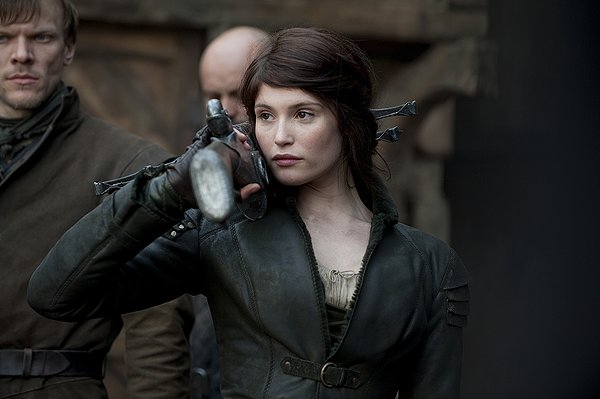 I think this image somehow somes up the entire film in a nutshell.

In one throwaway gag, Hansel uses a comically large syringe to give himself an insulin shot (because it sure is funny how eating a candy house gave him diabetes). Not only is this gag not funny, it's also not really even a joke. It's barely a footnote in the rough sketch that is Hansel's character, but they apparently thought it was important enough to bring back twice. Look away from the film at the right ten seconds, and you'd never know it was ever there.

I guess the diabetes counts as character development, given that Hansel doesn't get much more to work with other than "colossal grump." Jeremy Renner doesn't even bother putting on a European accent. I would chalk it up as a lazy acting choice if Gemma Arterton weren't doing an American accent to make the two match up. This makes the whole thing even more baffling. Clearly there's a reason for making the two witch hunters American transplants, but I guess the film decided to save a little bit of mystery just in case audiences are dumb enough to demand a sequel.

Perhaps if the film weren't in such a rush to end itself, it might be able to answer for some of this nonsense. Not only is Hansel & Gretel mercifully short, but also it moves at a breakneck pace that renders its plot nearly incoherent. Plot points are dropped so rapidly that we barely get a chance to grasp them, and Hansel and Gretel do not give a single shit whether you're keeping up with them or not. The film seems to realize how idiotic all of this is, and tries its hardest to get us to the end so we can spend the rest of our evening doing something constructive with our lives. It's one of the few courtesies this film has to offer.

If you forced me to sum up Hansel & Gretel in two words, 'almost clever' would just about do it. Then again, so would phrases like 'exceedingly juvenile,' 'distressingly vapid' and 'just plain fucking stupid.' Based solely on this film and his earlier Dead Snow, I imagine the only way Tommy Wirkola managed to get anything produced was by saying "Wouldn't it be cool if..." in a boardroom full of mannequins. Without anybody to tell him what wouldn't be cool, everything becomes fair game. Zombie Nazis! Fairy-tale bounty hunters! Kill Bill parodies! The sky's the limit! Somebody stop this madman before he ruins something people actually care about.

MINORITY REPORTS: Everything about this film seemed misguided from the start. Not just the premise, because that worked a treat for Abraham Lincoln, but everything else. The trailers gave us buckets of blood, foul language, Gemma Arterton headbutting Peter Stormare... all of which raised two important questions: Who the hell was the target audience for this thing and who on the production knew the answer to that? - Ian "Professor Clumsy" Maddison

This movie exists because the Brothers Grimm are too dead to collect residuals. - Sean "Keanu Grieves" Hanson