EXPECTATIONS: Writer/director Ti West is one of horror's best new talents, even if his skill lies in reinventing the old instead of providing anything entirely new. In The House of the Devil, he recreated the feel of '80s babysitter horror. In The Innkeepers, he went for the '70s ghost story. And now he's delivered a found-footage horror flick about the 1978 Jonestown massacre, one of the most disturbing American tragedies of the 20th century. I can't help but beam. I'm rarely this excited.

REALITY: Nowhere in the credits does The Sacrament mention its relationship to Jonestown, but Kool-Aid stains are all over West's screenplay, which creates an interesting paradox: This film isn't a blow-by-blow recreation of the tragedy - it's not even a modern retelling, despite some superficial similarities and reconfigurations of historical fact - but The Sacrament works better for viewers who have a rudimentary knowledge of Jonestown, viewers who have a sense of the climax West is leading us towards. The result is an effective flick that's nonetheless troubling: While The Sacrament is a solid example of West's signature ability to gradually build dread through off-kilter details, it's kind of a leaky boat, with its dependence on extratextual knowledge and demonstrations of problems endemic to the found-footage format.

The Sacrament begins (and ends, but we'll get to that later) with title cards to give viewers historical context: New York-based fashion photographer Patrick (Kentucker Adler) has received an invitation from his wackadoo ex-junkie sister Caroline (Amy Seimetz) to visit the commune Eden Parish, where the mysterious "Father" (Gene Jones) leads 200-ish followers in a life of agricultural autonomy and earthly pleasures. VICE Media reporters Sam (AJ Bowen) and Jake (Joe Swanberg) convince Patrick to bring them as his guests so they can produce a documentary on the secretive commune. But if life's so carefree and wonderful at Eden Parish, why must armed guards escort them from the airfield to the commune? Why does Caroline have a knack for peppering her sunny-side-up ruminations with disturbing asides? And what about the ominous undertones in Father's PA broadcasts? 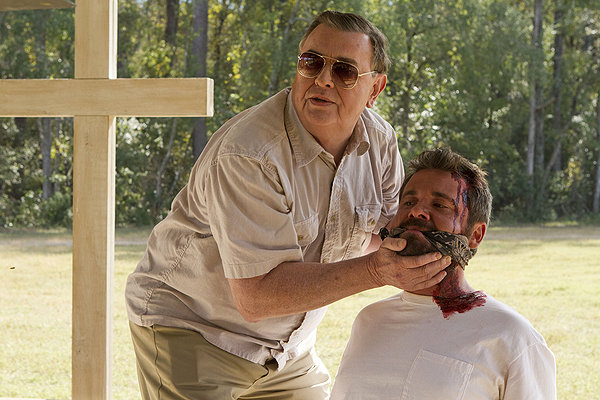 I don't think this young man knows how to shave.


As acting goes, this is Seimetz's showcase. While the other actors are solid - more than any other subgenre, found-footage horror relies on a baseline quality of acting to compensate for convoluted setups - Caroline is a character that's at once sympathetic and frightening. She's the PR face of Eden Parish, all smiles and sundresses, but she's also a very troubled woman, and through her, we can see why communal living might be attractive to someone who's trying to rebuild her life, even if she occasionally says weird things like "we have nothing to hide" with that faux-reassuring tone reserved only for people who say that you too can make millions through Amway. Addicts relapse in isolation, and New York City is nothing if not isolating, but a place like Eden Parish offers something like an extended family, bound to an us vs. them mentality that requires a lot of people to coexist peacefully. As Father, Jones occupies a similar space. He's more overtly menacing, but he's also charismatic and, well, fatherly. When our protagonists get a thirty-minute sit-down interview, he turns the tables on his interviewers - with so little resistance and so much charm, Sam grins even as he wonders if Father answered any of his questions at all.

Like West's previous films, The Sacrament is all about a slooooow buildup and a deft, violent climax, which is great for those of us who appreciate leisurely pacing and (well-planned) jarring tonal shifts and maybe not so great for viewers with short attention spans. That's not the problem. Hell, I don't even care if West is adhering to his own formula at this point; The Sacrament's pacing is wonderful, focusing our attention on its mood and atmosphere, qualities lost on many contemporary horror films. Where The Sacrament falters is its adherence to found-footage formulas - not to denigrate a subgenre that has given us a few modern classics, but West's decidedly hypercinematic voice doesn't always click with a format that requires films to look like they're shot haphazardly. It's no coincidence that The Sacrament's most effective scene occurs because a character sets the camera down. 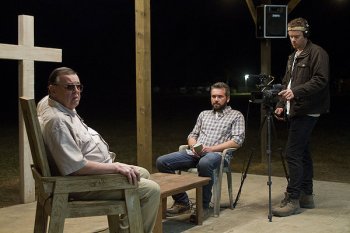 A and E are trickier, especially for a film that's not precisely a recreation of Jonestown but wants us to believe we're watching a documentary anyway. The Sacrament blends the real-life VICE Media trademark (and VICE's involvement in this film is a giant question mark) with a rough approximation of what Jonestown might look like in the era of DSLRs and cell phones, complete with opening and closing titles that give the illusion of providing historical context. It's not an easy sell for anyone familiar with Jonestown, The Sacrament's production, its status as a fictional narrative or the relatively big-name actors (for the quasi-independent world, anyway) that populate Eden Parish. Instead, these concessions constantly call our attention to the film's artifice - most tellingly, in a sweeping aerial shot of Eden Parish, which, with a handful of houses arranged around a pavilion, appears way too small to house 200 people. The Sacrament is the cinematic equivalent of a fat man dancing in a little suit: He may have moves and he's pretty entertaining, but goddamn does he look restricted.

MINORITY REPORT: Scenes look better when you stop moving the camera? No shit, I coulda told you that. - Kevin "Too Fat for Film School" Smith