EXPECTATIONS: The first and only time I heard anything about this movie was when they dragged the trailer across the screen in front of The Nut Job. In the five months since then? Nothing. Not a word out of anybody. For all I knew, this movie had the good sense to get lost in a dumpster somewhere. Then earlier this week, I found out that not only was Legends of Oz actually getting an insanely wide release, it is also a musical. Because it's just not enough for the movie to look like crap. It has to sound like crap, too.

REALITY: The 1939 Wizard of Oz film will outlive us all. A hundred years from now, climate change will destroy civilization as we know it, but the survivors will still be watching The Wizard of Oz through gas masks and ozone goggles. The same will never be said of Legends of Oz: Dorothy's Return, an animated trainwreck based on an Oz book written by one of L. Frank Baum's grandkids and starring an incredible number of Hollywood actors who all apparently have a hard time making rent. 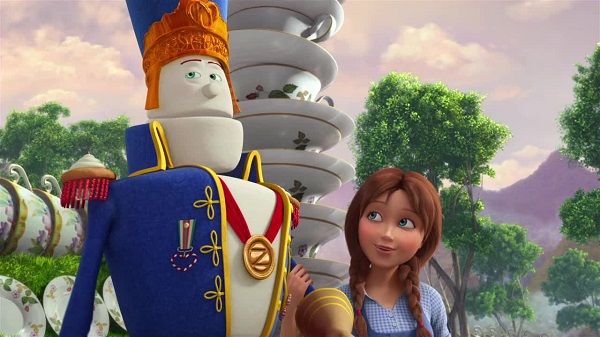 I'm terrified beyond the capacity for rational thought.

Legends of Oz is a direct sequel to the 1939 Oz. Dorothy (Lea Michele) hasn't been back in Kansas two seconds, and already Oz is going to Hell in a handbasket. The evil Court Jester (Martin Short) is angry over the death of his sister, the Wicked Witch of the West, and so decides to enslave the leaders of Oz as his own personal collection of marionettes. The Scarecrow (Dan Aykroyd), Lion (Jim Belushi) and Tin Man (Kelsey Grammar) send a rainbow to Kansas to summon Dorothy and Toto, who must journey to the Jester's castle to save Oz with a new team of talking animals (Oliver Platt), talking candy (Hugh Dancy) and talking trees (a pants-shittingly horrifying Patrick Stewart). If you've ever played Candy Land with three children who all hate each other, then congratulations, you've seen this movie.

The only truly interesting part of the story is its bookend segments, which find Dorothy and her family picking up the pieces after a tornado rips through Kansas. It's a vaguely contemporary setting, which makes comparisons to more recent tornadoes tearing up the Midwest practically unavoidable. Under more pleasant circumstances, I could see these parts of the film as a sort of tribute to towns like Joplin, Missouri. As it is, though, there's a deranged home appraiser (also Martin Short) involved, and Dorothy outs him as a scam artist when she returns from Oz. If that's the lesson they wanted Midwestern viewers to take from this film, that's not going to solve anyone's financial woes. 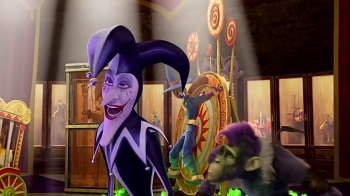 That's definitely true, but I still feel it's important to consider films like this. For better or worse, The Wizard of Oz is one of our most enduring films. We come back around to it every few years, either because we've run out of fantasy books to remake or because it reaches some milestone anniversary. We just happen to be at the tail end of both right now. As long as Turner Broadcasting keeps that film in rotation, people are going to keep trying to spin new versions of it.

Now, I can see your face from halfway across the internet. You're leaning back in your chair with that disgusted look people get when they smell a carton of bad milk. Why would I even bother reviewing a film that looks like one of those Brazilian Pixar knockoffs? Legends of Oz is going to disappear in a week and nobody but me will ever have the misfortune of remembering it.

Legends of Oz operates in roughly the same cultural neighborhood as TV shows like Adventure Time. Kids singing songs and learning important life lessons while running off to have adventures with people made of candy and voiced by Tom Kenny? Yup, sounds like Adventure Time to me. The only difference is that Adventure Time is written by people who understand the complicated dance of growing up, the steps and turns of a budding romance, the playful whimsy of making candy people talk in candy puns. Legends of Oz features a scene where Dorothy is put on trial in Candy Country for eating candy and is found guilty by a jury of her peeps. As in marshmallow peeps. You know, because it's Candy Co--fuck it, never mind. 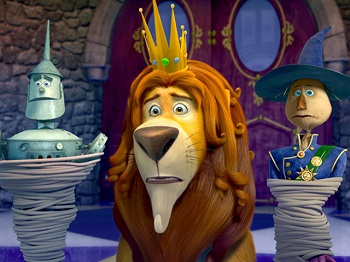 I know the feeling.Taking Legends of Oz on its own is an exercise in madness. The only way to even discuss it is by constantly comparing it to the 1939 film, because at least that one was produced in an era before Bryan Adams started writing songs for movies. Hey, that reminds me: Bryan Adams wrote songs for this movie, none of which are even slightly memorable. The most memorable piece of music in this film is the main theme, which is juuust close enough to the Polar Express theme to avoid a lawsuit. It seems like this film's entire reason for being is to make whatever you compare it to look like a brilliant work of art.

The look of this film falls somewhere between a Pixar demo circa 1994 and one of those animated off-brand slot machines you find in Las Vegas. Every character looks like they just stepped out of a nasal spray commercial and at any moment they might start talking directly to the audience about bible verses. That never happens, but the way the story plays out, it feels like that possibility is always lurking around the next corner.

MINORITY REPORT: Even though L. Frank Baum's Wizard of Oz is public domain, everything involving/exclusive to the 1939 film is still property of Warner Brothers. So this whole film's existence is flying too close to the sun. The only thing saving it from litigation is that they seemed to go out of their way to make sure no one on Earth, including WB lawyers, would ever care about this movie. -Martin R. "Vargo" Schneider