We're heading into Detroit this week for a double bill of Brick Mansions and Only Lovers Left Alive. Then we'll follow those up with new VOD "gem" Favor.

EXPECTATIONS: I'm actually kind of surprised it's taken this long to get a remake of District B13 off the ground. Its premise is simple enough that you could easily plug it into any other setting, and it looks like that's exactly what Luc Besson did. It wouldn't shock me in the least if he just took his original B13 script and scribbled "...then Paul Walker says this" a hundred times in the margins.

REALITY: Parkour has quickly become one of those universal languages, like binary or Esperanto. It doesn't matter where it's performed, or even who performs it. It will always look exciting when you make someone do it in a movie. That's pretty much where my praise for Brick Mansions begins and ends. If you've ever seen District B13, you are not going to find anything new or exciting here. On the other hand, if you just love watching dudes wall-jump in cargo pants, you'll definitely get your fill.


Reprising his role from the original, David Belle plays Lino, a former crook living in a future Detroit ghetto known as Brick Mansions. (I'm no architect, but don't they make most mansions out of brick these days?) Crime has gotten so bad in this district that the city has walled it off and posted armed guards at all the exits. Lino teams up with an undercover cop named Damian (Paul Walker) to rescue Lino's girlfriend, Lola (Catalina Denis), from resident druglord Tremaine (RZA). At the same time, Damian's mission is to sneak into the district and steal back a neutron bomb that Tremaine is using to hold the city for ransom.

By changing the film's setting to Detroit, Brick Mansions accidentally becomes a sister story to RoboCop. The rich attempting to destroy the poor in order to scoop up their real estate was one of the underlying threads of Paul Verhoeven's film. It's a testament to just how densely layered it was that 2014 needed two separate films just to remake it. Of course, without a robot stomping around to take out the bad guys, Brick Mansions becomes an exercise in futility. Lino and Damian frantically rush from one setpiece to the next, rarely stopping to take in the plot going on around them.

It's hard to tell whether or not Brick Mansions knows how silly it is. On the one hand, we have a film that really tries to shine a light on the way politicians and law enforcement ignore the poorer boroughs in their cities. On the other hand, we have a film in which a druglord with an affinity for his mother's secret chili recipe chains a waitress to a rocket that is pointed at downtown Detroit. There's no question that this is an incredibly silly film, but that doesn't stop it from trying to get political in a "grade school civics presentation" kind of way. 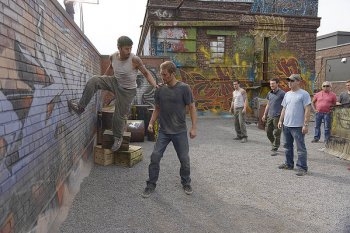 Parkour was invented by French doctors as a treatment to severe allergy to being on the ground.

Aside from the setting, which is about as gritty and realistic as a Rockstar video game, pretty much everything about Brick Mansions is unquestionably ridiculous. That includes the one-liners. Man, oh man, is the dialogue painful. The script sounds like it was written by RoboCop himself, trying desperately to fit in among the gangsters and thugs. Robo can put on cargo pants and a hoodie, pulling the hood over his face to hide his chrome dome, but he's not fooling anybody. When Lino and Damian first team up, Damian reveals that he planted a bug in Lino's pocket to track him down.

"Cop tricks. That's all you people have," Lino says, realizing immediately that Damian is actually an undercover detective.

The real shame of Brick Mansions is that this had to be the last film Paul Walker completed before his untimely death. When paired with David Belle, the actual inventor of parkour, Walker struggles to keep pace. Belle wall-jumps and leaps through inconceivably small holes with the quickness, leaving Walker in the dust to figure his own way around these obstacles. He tries to make up for it by creating his own method of crashing through ceilings and forcing his way through walls of people, but it's just no use. Without the Fast & Furious crew backing him up to make him look good, Paul Walker is kind of lost in this film.

To his credit, first-time director Camille Delamarre knows his way around an action sequence. One of Luc Besson's longtime editors/proteges, Delamarre has a sharp eye for staging fights. For every clumsily written scene about the haves dicking over the have-nots, there are three sequences in which Lino backflips off a guy's shoulders or parkours out of the way of a moving vehicle. It goes a long way in making Brick Mansions watchable, but isn't nearly enough to make this a film worth remembering a week from now.

MINORITY REPORT: All I know of Detroit is what the airport looks like. I didn't see any RoboCops or parkourists or anything like that in there. Just a bunch of impatient people waiting to board planes. I assume that happens in this movie too, just to cement the authentic Detroit experience for people like me. - Ian "Professor Clumsy" Maddison