We have reached the very depths of the seasonal dip in quality cinematic excursions. Ian "Professor Clumsy" Maddison explores #thatawkwardmoment when the movie of the week is That Awkward Moment, Joseph "Jay Dub" Wade wears white after watching Labor Day and Martin R. "Vargo" Schneider reviews Gimme Shelter, which we in the office will insist on calling Give Me Shelter because we're all grammar fascists.

EXPECTATIONS: I don't really know what to think about this one. That title has all kinds of implications of old Hollywood executives trying to find "hip" things to make movies about for the kids these days by scouring the internet for amusing hashtags. Everyone loves hashtags. On the other hand, That Awkward Moment did inspire this thread on the IMDb message boards, so it looks like I can at least enjoy watching desperately heterosexual men "flopping [their] dicks around [their] faces."

REALITY: While That Awkward Moment has a great cast and a smattering of genuinely funny scenes it actually falls flat on the arse of its own flimsy ideas.All of the conflict in the film stems from the main character's bull-headed arrogance and only resolves itself when the other characters realise that they are adults. That, combined with a disappointingly low amount of dicks flopping around faces, makes That Awkward Moment into a much less engaging and clever film than it thinks it is. 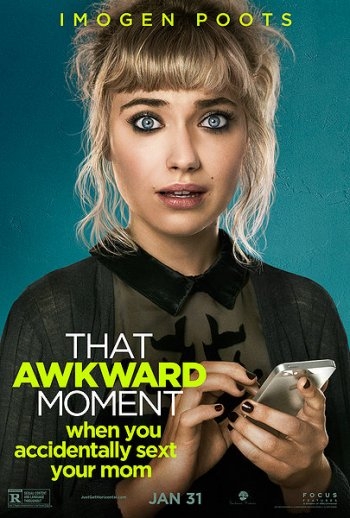 Worth noting: the scenario described in the tagline is not one portrayed within the movie itself.

Adult human males Jason (Zac Efron), Daniel (Miles Teller) and Michael (Michael B. Jordan) decide in a moment of whimsy to swear off relationships and just focus on their friendships so they can relive the halcyon days of I would assume college and their early twenties. This is sparked off by Michael's wife Vera (Jessica Lucas) leaving him for a human male lawyer who looks like Morris Chestnut (who can compete with that?). Unfortunately, and I use the word "unfortunately" in the loosest possible sense, Jason finds himself falling for a human female he meets in a bar called Ellie (Imogen Poots), Daniel starts to develop courtship emotions for his human female friend Chelsea (Mackenzie Davis) and Michael foolishly pursues the idea of reconciling with Vera. And that's it. Nothing bad happens to any of them at any point in the film.

The thing about personal growth is that it's difficult to gauge. Everybody grows up differently and there are no objective metrics by which to measure the journey into adulthood and you will often find that political ideals will diverge and ethical ideas will be hugely different. Handy, then, that romantic comedies have found a useful way of gauging the personal growth of their manchild protagonists. All you need to do is give him an impossibly perfect love interest. Often referred to as the "lunatic fairy fantasy woman," this character is flawless in the eyes of the protagonist and will lecture him at length about his many many many many deeply-seated issues. By proving his ability to listen to someone and realise he's been a dick, he is rewarded with her undying love.

In the case of That Awkward Moment, the impossibly perfect love interest comes in the form of Imogen Poots' Ellie. We are introduced to Ellie in a bar using scathingly clever put-downs to refuse a drink from an insistent bloke. Jason decides to join in her scathingly clever rebuke and the two develop a rapport that leads to him mistaking her for a prostitute. Later, after she gives him a chance to make up for the prostitute gaffe, he decides to not bother showing up to her father's funeral. In response to this, she carefully explains that being there for someone is really all relationships are (a simplistic idea, but not a terrible one at a push). He ruminates on this for a while and decides the best thing to do is repeat it to her in the climactic scene. She takes this as a sign that he is capable of retaining information and is therefore perfect for her. 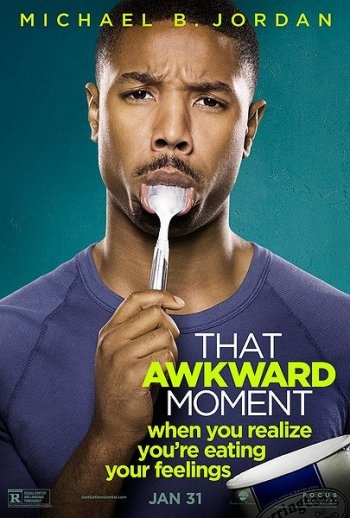 This scenario, however, is portrayed in the movie. Michael B. Jordan does eat some ice cream in this movie.I'm approaching this in a deliberately clinical way to make a point about the contrivances that drive these romantic comedies, especially male-centric ones like That Awkward Moment, but you can easily get away with following the formula down to the letter if you just make your characters entertaining and likeable enough. Are Jason, Daniel and Michael entertaining? At times, certainly. Are they likeable? With the exception of Michael, no.

Jason's insistence that none of his bestest buds get themselves girlfriends is the kind of central plot thread that a teenager might come up with. It creates no tension at any point in the film as we wonder just why it matters so much to him that Daniel is now having sex with the same girl on a regular basis or that Michael might be trying to reconcile with his wife. You'd think someone so intent on keeping people out of his life would end up being much lonelier. When Michael reaches the end of his tether and punches Jason in the face, I couldn't help but want to cheer. That's probably why Michael is the only likeable character in this film, that and his consistent calling out of Jason and Daniel's idiocy. The truth is, it's just hard to care about these people, especially when their only problems are that a girl likes them and they're too immature to accept that.

That Awkward Moment is funny, though. If you like that kind of bro-chemistry, slightly homoerotic dialogue that circulates around constant back-and-forth ad libbing about the colour, size and shape of their penises (which are sadly not flopping around faces) or the level of attractiveness that only Morris Chestnut or a Morris Chestnut lookalike can attain (Morris Chestnut is not in this movie). It does peter out towards the end, though, as mawkishness replaces humour in anticipation of what I assume is supposed to be the climax of this gripping narrative.

I find myself with very little to say about That Awkward Moment. It is a film that wants to appear to be too clever and above everything to be clichéd, but that is simply a red herring to hide all of its clichés. It is a film that wants to be Sex and the City for men, without realising that Sex and the City would trample working class women under its expensive heeled shoes. I can't hate That Awkward Moment, not because it is charming, but because it is impossible to care strongly enough about to hate.

MINORITY REPORT: I saw an ad for this film the other night featuring a scene in which one guy shows the other guys how orange his penis is. In that awkward moment, I knew this was the film for you. - Joseph "Jay Dub" Wade