EXPECTATIONS: The last time director John Carney set out to make a musical, the result was Once. That little movie quietly took the indie film scene by storm in 2007, and eventually found its way to Broadway, where it became a huge hit with people who only ever watch the Tony awards. His latest, Begin Again, promises more of the same, with Mark Ruffalo and Keira Knightley in tow. Don't tell me that won't at least make for a pleasant evening at the movies.

REALITY: The worst kind of song is one that starts with a great hook and then hammers that hook into oblivion for the next three minutes. Once a songwriter lands on an interesting sound, you'd think they would find another one to complement it, or at least find a unique way to spin the first one again. That is Begin Again's problem in a nutshell. It opens with a catchy narrative hook and a pair of great performances, but then quickly begins spinning its wheels waiting for the next song to start. 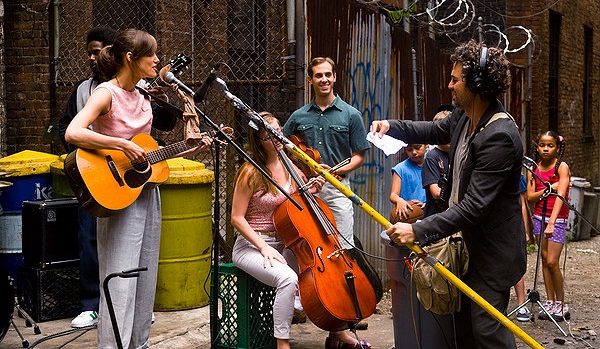 We first meet singer/songwriter Gretta (Keira Knightley) as she's reluctantly taking the stage to perform a song in a New York City lounge. When it ends, the only person clapping is music executive Dan (Mark Ruffalo), drunk off his ass and blown away. Then the film rewinds to show us how Dan wound up in the bar that night. After losing his job at his own record label, Dan goes on a daylong bender that ends with him completely falling in love with Gretta's song. Still stinking drunk, Dan offers her a record deal. Then the film rewinds again to show us how Gretta wound up at this moment. She's in New York City to help her boyfriend (Adam "Maroon 5" Levine, practically playing himself) record his new album. They break up soon after, and her street musician friend Steve (James Corden) insists they go out to a bar.

The film dispenses with all this wonky backstory in the first act, leaving the remaining hour to follow Gretta and Dan as the two embark on a music project. Their plan is to record an album in various outdoor locales around the city, using the ambient sound and innocent bystanders as props to make their album sound more real. She's a jilted lover with a chip on her shoulder. He's a down-and-out music producer with nothing left to lose. Together they fight crime, and by 'fight crime,' I mean 'record music in public spaces, hoping Johnny Law doesn't catch them.'

Begin Again began its life on the festival circuit as Can a Song Save Your Life? There are hints that Dan briefly contemplated suicide before hearing Gretta's song, but nothing ever really comes of this point. The new name suggests someone out there thought the opening act's narrative jigsaw puzzle was really fucking cool and wanted the whole film to be about that. I can't say I blame them, either. It's the kind of creative backpedal that people use when they realize their story isn't all that interesting. Show a few things out of order, and nobody will notice the difference. It works well enough, but once the story moves away from introductions, the whole thing sputters out. 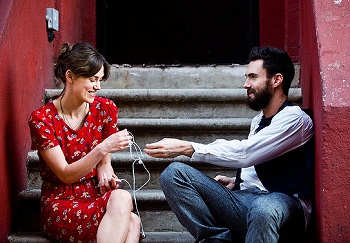 No one can resist the charm of Adam Levine's beard.Then again, screenwriting tricks aren't the point of Begin Again. It's all about the music, and in that respect, the film acquits itself nicely. This film's music veers more into Top 40 territory than Once did, almost like they were purposefully trying to land a licensing deal with Wal-Mart or Coca-Cola, but they're still perfectly fine tunes. Keira Knightley and Adam Levine make up the soundtrack almost exclusively, with a couple tracks from CeeLo Green thrown in for flavor. Like Levine, Green shows up essentially playing himself. He appears at Dan's behest to offer Gretta his musical resources, which makes me stop and wonder. How dire can a person's situation possibly be if they still have a millionaire like CeeLo Green hanging out in their back pocket? That ought to count for something, right?

Carney peppers little pieces of story around the film's periphery, but few (if any) of them ever really go anywhere. The most significant of these is a portrait of Dan's home life, where he constantly tries to win back the respect of his ex-wife (Catherine Keener) and their daughter (Hailee Steinfeld). And every once in a while, Mos Def shows up as the film's requisite snotty music executive to tell Dan he's an idiot. That's probably hilarious to people who know more about music than I do.

I'm torn on this film, to be perfectly honest. On the one hand, I would love nothing more than to be snotty about it myself and make fun of it for being incredibly up its own ass. On the other hand, Begin Again has a gentle, lighthearted spirit that makes it incredibly difficult to hate. When it gets down to the business of playing music, the film is as enjoyable as anything else on offer this summer. That said, you might be better off listening to the soundtrack at home and imagining your own movie for free. Anything's better than a story that wraps itself up through the magic of CeeLo Green.

Why is that Mos Def thing hilarious? Three words: "The Rape Over." - Sean "Keanu Grieves" Hanson