Admission is a friggin' checkerboard of a movie, hopping back and forth from "part I like" to "stuff I can't stand," often in the same scene. Sometimes in the same line. It feels so indecisive in tone that I'm having difficulty even telling you whether I think you should see it. Maybe watch it and go to the bathroom a lot? It is the perfect movie for people with urinary tract infections. 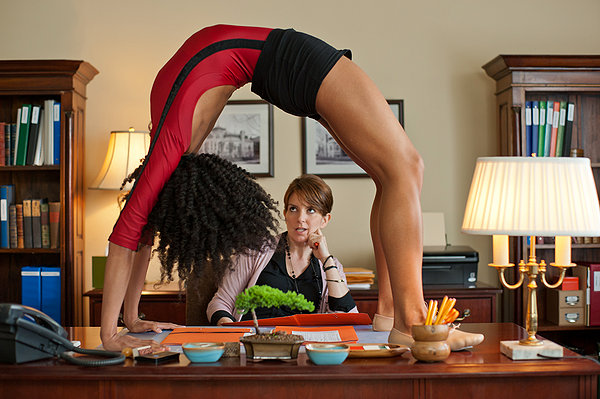 That is just severely inappropriate. I am trying to work in here.


Tina Fey plays Portia Nathan, admissions officer for Princeton University, who is competing with her rival (Gloria Rueben) to secure the job of her retiring boss (Wallace Shawn). This brings her to the experimental Quest School to meet with socially awkward genius Jeremiah (Nat Wolff) at the behest of school founder John Pressman (Paul Rudd). However, John has ulterior motives for arranging the meeting between the two of them: He believes that Jeremiah is the son that Portia secretly birthed and gave up for adoption in college. See, John coincidentally happened to know the only other person who knew about the baby, and he happened to remember the kid's time and date of birth eighteen years later, and he happened to have access to Jeremiah's birth certificate. A lot of things had to "happened to" while setting up this situation.


Anyway, Portia and John team up and try their best to get Jeremiah into Princeton, Portia debates whether to tell Jeremiah she's his mother, and the movie attempts us to convince us that this is somehow better than colleges accepting legacy students whose parents donate boatloads of money. It's not nepotism if he really deserves it, you guys.

The film's initial failure appears to be that none of these characters are likable in the slightest, with the notable exception of Jeremiah. Portia is whiny and neurotic, while John is smug and self-obsessed. Portia's mother (Lily Tomiln) is a radical feminist author who insists Portia call her by her first name to avoid the "mother-daughter roleplay scenario" and won't buy dog food because "I'm not their slave, dogs are carnivores." She's basically a feminist as written by Fox News, and I cringed every time she was on screen. Then I slowly started to realize that we're not supposed to like these characters - that's the point. The film is a call-out of liberal smugness and hypocrisy. 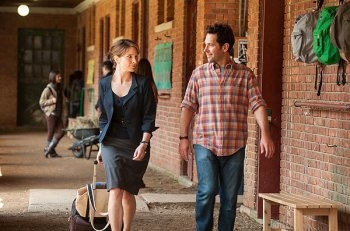 Is it just me or does Paul Rudd walk like he's pretending to walk? Like, he's not sure how it's really done so he just approximates it.Take, for example, one of the film's better moments, wherein Portia is being berated by hippie students at the quest school who say things like "Man, isn't college just for society's definition of success?" and "Why should we go to college when we should be making the world a better place?" to which Portia basically responds "Everyone wants to make the world a better place. Good luck doing it without a college degree, you little assholes."

Even better is the call-out of John, who purports to be a world traveler and doer of good deeds when he's actually a poseur who is too busy fixing other people's problems to listen to his son for five minutes. (Oh yeah, John has a son. That he adopted from Africa. Because of course he does.)


When we realize we're not supposed to like these people, they somehow become more likable, because they're inherently flawed characters, and they start to realize it right around the time we do. (Except for Tomlin, who is pretty much unbearable throughout.) It's a movie filled with all those insanely frustrating people whose general philosophies you agree with on a conceptual level, but you still just want to punch them in their smug, self-righteous faces.


I'm making all of this sound a lot more interesting than it really is, by the way. Most of the film revolves around Portia's back-and-forth over whether to tell Jeremiah she's his mother, culminating in an incredibly unfunny montage of her trying to become more matronly, grabbing people's babies out of their arms at the store and whatnot. I just do not understand something about Tina Fey. She is one of the funniest, most talented women in Hollywood, but when you make her the star of a movie, it's always lousy to-mediocre. Is she only funny when she's doing her own material? Does she have Hollywood's biggest case of text anxiety? I don't get it.

Anyway, Nat Wolff is a surprising standout here, pulling off Jeremiah's awkward rambling with an odd amount of charm. Jeremiah's brain works a little differently than most people's, but he's still able to make friends very easily. He's a weird kid; he's not "The Weird Kid." I respect this portrayal, and I believe Wolff's performance comprises most of it. The film's second-best moments, and the only time Weitz's creativity really appears, are when Portia imagines the "spirits" of all the students she has to assess and reject, and is particularly haunted by the image of Jeremiah as she reads through his history. The film's actual best moment is when a Princeton officer tells Paul Rudd "Oh yeah, you look like a teacher." Because, well, Paul Rudd totally does.

I'm not really sure what the point of Admission is, and I'm not really sure the film does, either. This is a film that rails against the corrupt university applications process in America, but the entire plot is centered around us hoping a kid gets into Princeton because his mom works there. It's chuckle-worthy in parts, but not enough to bill it as a successful comedy. The script throws some curveballs in the third act that are interesting, but mainly because they left me wondering "Shouldn't this film be over by now?" What we're left with is something that's basically okay, a movie no one will ever really love or really hate. However, when you take two of the most charming and likable people in Hollywood and create a movie with absolute minimum appeal, you've done something wrong.

MINORITY REPORT: It's amazing, the hoops characters jump through to get to the opening credits. Imagine how different Admission would be if the characters had failed to hit some of those checkpoints along the way. Portia uses birth control: No movie. Portia gets an abortion: No movie. Jeremiah's born with Down Syndrome: Portia's moonlighting at Denny's just to pay the bills. John Pressman's wrong about that birth date: Portia's bending over backward to guarantee admission to a child that isn't even hers. Worse, John Pressman hates children: Portia has no idea that she just fucked over her own kid by rejecting his application. It's amazing what standards characters must meet when they're preparing for a plot. - Sean "Keanu Grieves" Hanson