EXPECTATIONS: "What is a Crood?" I hear you ask. Well, not really. Because you know damn well what a Crood is. You're sick of seeing them in every available marketing avenue. You're surrounded by Croods. There's a Crood in every shop window, a Crood for every child; there's probably a Crood staring at you right now. Yes, a Crood is a character from the new animated feature film The Croods. Given Dreamworks' rather spotty track record, this could really go either way. Will it be a Bee Movie or a How to Train Your Dragon? Only one way to find out.

REALITY: Let's face it: You, the person reading this now, are not the target audience for The Croods. If you are, then maybe you should talk to your parents about putting some child protection on their computer. This is a site for adults to make poo and fart jokes, no kids allowed! Anyway, the point is that if you're seeing The Croods, it's not really for you, you're doing it for the kids. All you want to know is whether it's going to be completely unbearable. Well, worry not, for The Croods is actually pretty good. 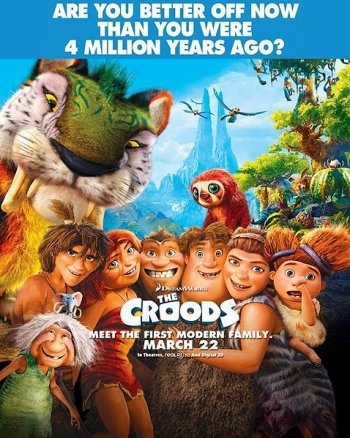 Me personally? Yes, I would imagine so.At the start of the film, we meet Eep Crood (Emma Stone), a teenage cave person who is tired of being cooped up in a cave with her insufferable family. Her father Grug (Nicolas Cage) has kept the family alive until now with his personal motto "Never not be afraid." He is determined to crush Eep's curious nature with stories of death and darkness, but their world is turned on its head when the slightly more evolved Guy (Ryan Reynolds) appears with his fire and shoes and big ideas to warn them all that the ground will open up and destroy them if they don't move out soon. So, the whole Crood family, complete with mother Ugga (Catherine Keener), brother Thunk (Clark Duke), baby sister Sandy (Randy Thom) and Gran (Cloris Leachman) go looking for safer ground together.

This film spends some time making you think that Eep is the lead character early on, just like my little plot synopsis up there did. Once the clan leaves the cave, though, the focus shifts to Grug and his stubborn reluctance to change his ways. This is fine, but it seems a little odd to put all that early emphasis on Eep and her desire to move on only to switch the emphasis to her dad once she gets that wish. It's like her entire little arc exists solely to fill a lengthy prologue, and the real film is about seeing if Nic Cage's extremely unique acting style translates well into animation. Thankfully, it does.

You don't cast Nicolas Cage in your lead role if you don't want him to Cage it up. That's the mistake they made with films like Stolen, Trespass and Season of the Witch: If you ask him to do a muted version of his outrageous act, it all starts to feel a little pointless. Good thing, then, that his performance here is loaded with the appropriate level of Caginess. He often shouts gibberish at animals, and in one scene he suddenly decides to talk like a stoned hippie. Why not? It's Nic Cage.

Which one of these is Nic Cage?

Aesthetically, there are some interesting flourishes peppered throughout The Croods. During action sequences, the characters will run toward the "camera," get as close as possible and then the camera will whip round and they will continue away from it. It's obviously done as a way to capitalise on the use of 3-D, but it becomes an interesting motif independent of that. The thing is, in most of the shots throughout the film, we see all of the main characters operating together. It's important to note when films do this, because so often we have scripts that try to play up the relationships between characters, but we don't always see it. The Croods gets it right.

Remember that Miami Vice movie with Jamie Foxx and Colin Farrell? The two main characters almost never spoke to each other, but they were almost always operating together in the same cinematographic space. With Django Unchained, Tarantino devoted much of the film to central cast members being dishonest to each other in the same frame. In The Croods, the ensemble moves together, hunts together and eats together. It's a great way to focus on character development without loading your film with expository dialogue.

The point of this whole film is that families should stick together, especially if they're the last family of cave-humans on the planet (I think we're all descended from Croods somehow). It's not a groundbreaking message for a family film, and it's a little blinkered with "good old-fashioned values" to be all that universal in the modern world. That said, your kids are going to love it, and you'll enjoy it too. It's bright, funny and Nic Cagey.

MINORITY REPORT: I'm not sure I know what's worse: A guy using a monkey to hold up his pants, or a belt that talks and does other stuff that belts typically don't do. Chris Sanders, you're just trying to give me a headache, aren't you? - Joseph "Jay Dub" Wade