Robert "Macrame_God" Seeders watches The Bounty Hunter, because nobody else wanted to. Joke's on him!

EXPECTATIONS: Oh hell yeah! This is my kind of shit! The guy from 300 running around as a bounty hunter, kicking ass and taking names! I can't wait to - wait a minute. What? It's a romantic comedy?! It stars Jennifer Aniston?!

REALITY: It seems like Hollywood cranks out a new romance film every week. Sometimes they're romantic comedies, or fantasy/sci-fi romances, or just plain straight-up romances. Regardless, the film industry is clearly out to make serious bank by selling love. What I don't understand, though, is why they seem to be completely incapable of producing a romance picture that's actually halfway decent. The Bounty Hunter, the latest dud from director Andy Tennant (Fool's Gold), only furthers my bewilderment. It's something of a romance/comedy/action hybrid that attempts to appeal to all audiences with its scatter-shot approach to combining genres. I guess the plan is that if one of the three genres doesn't work, then the film will still have the other two to support it. Unfortunately for viewers, The Bounty Hunter proves itself to be equally inept at all three. 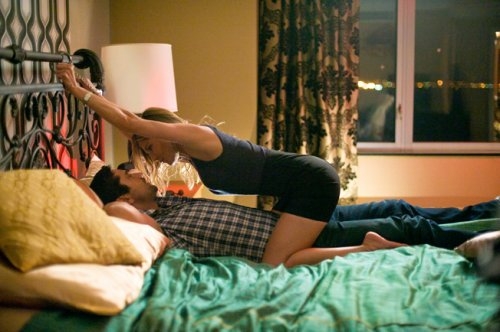 The Bounty Hunter is the story of Milo Boyd (Gerald Butler), an out-of-work police officer turned bounty hunter who has been assigned the task of picking up his ex-wife, reporter Nicole Hurley (Jennifer Aniston). You see, Nicole stupidly skipped out on her court date for a traffic violation so that she could pursue a murder/suicide cover-up that's never explained in detail. Milo gleefully takes the case to nab his estranged former lover, only to find himself caught up in Nicole's investigation of this vaguely sketched crime. Conversely, Nicole finds herself tailed by the bumbling thugs who are out to get Milo for his unpaid gambling debts. 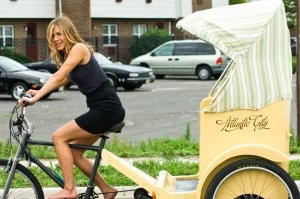 Hilarious comedy!First things first: The romance. There isn't any. There is absolutely no chemistry between Butler and Aniston. In fact, they're rarely even in the same shot. Granted, they're supposed to hate each other at the beginning of the film, but they should at least seem like they're bonding at some point, so that we can buy it when they're supposed to have overcome their differences and put their grudges behind them. Instead, they can't even seem to go out of their way to act like they're in love. Perhaps they both knew that they were in a cranked-out bullshit film, but that's no excuse for laziness. The two say they're in love with each other, but it's an egregious case of all tell, no show.

Secondly, the comedy. It's nowhere to be found. The Bounty Hunter just isn't funny. Lord knows it tries. It tries harder to be a comedy than it does anything else. The film tries to pound out a gag in practically every other shot, but they're all delivered with the flatness of a warm can of Coke Zero left open overnight. The Bounty Hunter sees the old move-the-car-forward-just-as-someone's-about-to-get-in prank as the height of hilarity. Other classics include saying the word "balls" in front of children, watching a creepy coworker follow women into the ladies restroom, and seeing a man take a stun gun to the neck. I didn't laugh once. Zero laughs. That's one less than I got out of watching Seven. 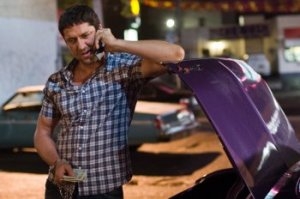 Well paid actors!Lastly, the action. It doesn't really exist. I feel cheated. The Bounty Hunter might look relatively action-packed in the previews, but I've had toenail-trimming sessions that were more thrilling. The best you might get out of the whole experience is a lukewarm foot chase during the opening credits. After that, there's a shootout that shouldn't actually count as a shootout because it only consists of about three fired shots. There's also a golf cart chase sequence through a country club, which also doesn't count, because anything related to golf comprises the antithesis of excitement. There's a combination gunfight/car chase in the second act that could be considered a legitimate action sequence, but it's over in about twenty seconds. I suppose you could argue that they were going for a bit of realism with that scene, because if anyone actually tried something like that it would be over in an instant, but if authenticity was the goal, then these two charmless idiots would have been dead long before the second act began.

With all the romance pictures flooding theaters, you'd think the film industry would know better by now than to release something this woefully awful, but, alas. I guess I can't fault them for trying though.

What am I saying? Of course I can!

MINORITY REPORT: I want to pluck out Gerard Butler's ridiculous teeth and jam them into his tiny, Scottish eyes one at a time. I'll take bets on how many I can fit into each eye and spend my winnings on explosive devices that I will shove up his arse sideways before obliterating him entirely. Any remains will be sent back to Scotland, to remind them of what they did to the world.

What I'm saying is that I'm not all that keen on Gerard Butler. -Ian "ProfessorClumsy" Maddison