Cop Out; The Crazies

It's a rather unfortunate week this week, with two of our regular critics enduring some real duffers. Joseph "Jay Dub" Wade finds intervention with Cop Out, which helps him overcome one of his most off-putting problems. Meanwhile, Robert "Macrame_God" Seeders runs the frustratingly mediocre Crazies through his swather blades.

Cop Out Lives Up to its Name

EXPECTATIONS: Hollywood's finally giving my man, Kevin Smith, a decent budget? It's a cop movie with Bruce Willis and that black guy from SNL? Well sign me the fuck up, bud! Let's get this shit started!

REALITY: Hi. My name is Joseph, and I'm a Kevin Smith fan. I'm here today because my family and friends told me I needed help. When I came home Friday afternoon from a matinee screening of Cop Out, they had an intervention waiting for me. It wasn't pleasant, and I'm pretty sure I punched a couple of people in the face, but they finally talked some sense into me. It's been 24 hours since my last Kevin Smith movie, and I think I'm ready to quit for good. 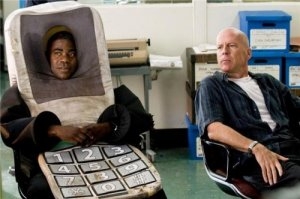 Funny!I got hooked the same way every teenager gets hooked. The stories about everyday schlubs finding their places in the world weren't anything special. Every movie has that. What hooked me were the two things exclusive to Kevin Smith movies: Jay and Silent Bob. It's true that a little Jay and Silent Bob every now and again isn't enough to get you hooked, just enough to make you feel good about yourself. But I, like so many before me, had to indulge. Marathon screenings of the entire Smith catalog weren't uncommon in my teenage years. Hell, sometimes we'd even freebase the animated Clerks series for more concentrated laughs.

But that's all over now. Because I've seen the bottom of the barrel. I've seen what happens when a natural born writer gives up his bread and butter just to make a little extra bacon. I've seen Cop Out, and it isn't pretty.

Like pretty much every buddy cop movie since the days of silent film, Cop Out features a pair of police officers who couldn't be more opposite if they tried. And they're trying pretty goddamn hard. At some point in the past three years, Die Hard's John McClane (Bruce Willis) changed his name to Jimmy Monroe and transferred over to the Brooklyn police department. There, he works with a cop named Paul Hodges (Tracy Morgan), who must be a part of the NYPD's handi-capable program or something, because there's no other explanation as to why such an idiot could stay on the police force for ten years. Anyway, Jimmy needs to pay for his daughter's wedding, so he tries to sell his prized baseball card. When the card is stolen in one of the most excruciatingly stupid robberies ever committed to film, guess what Jimmy's mission is? If you guessed "Get the baseball card back", you'd almost be right.

Instead, the movie throws in a bunch of Mexican gangsters who promise to get back Jimmy's baseball card if he agrees to re-enact half of the movie The Transporter for them. Also, the head gangster is named after a sandwich. Also, Seann William Scott does parkour. Also, Tracy Morgan dresses up as a cell phone and has a girl's name. Also, Kevin Pollak shows up. Kevin Pollak once gave me the finger at a Starbucks because I recognized him....

...Sorry, I'm rambling. But that should give you some sense of what this script sounds like. It's literally just Tracy Morgan walking around shouting a bunch of things, and every once in a while Bruce Willis shoots a gun. I want to say Kevin Smith is better than this, but he didn't write this one. He only read the script, said "I like this," and agreed to direct it. Somehow, that's worse than if he'd written the movie himself. It's like he's given up on the one thing he was (arguably) good at. It's so distressing to me that I've had to completely re-evaluate my appreciation of Kevin Smith. 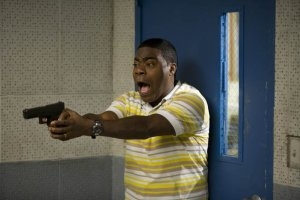 Amusing!The man has never shown any talent for directing a scene where the camera moves faster than the dialogue, so why did he decide his first big studio film should be an action-comedy instead of just a regular comedy? I don't know. The film is every bit as foulmouthed and dirty as any of Smith's previous non-Jersey Girl films, so why does it look like it was edited down to a PG-13? I don't know. Why did Kevin Smith pull the guy who wrote the Beverly Hills Cop theme out of retirement just to have him noodle around on GarageBand for an hour? I don't know. It's a buddy movie about two cops trying to bust a ring of drug smugglers and car thieves, so why is the film's MacGuffin a goddamn baseball card? I. Don't. Know.

This movie forces you to ask a dozen questions like that and never offers anything resembling an answer. I don't know why anyone in this movie does the things that they do, especially Tracy Morgan. It's like watching Olympic curling in French; you bilingually have no idea what the fuck you're looking at. By film's end, you come away with the distinct impression that you've just seen a Kevin Smith movie, but you can't remember any of it. Reminds me of the time I started watching Dogma and suddenly woke up face-down in my preacher's backyard.

I've been riding the Kevin Smith buzz for ten years, and Cop Out brought me back down to earth in 110 of the most boringly jokeless minutes of my life. But if I've given it up, then so can you. There's still time. You can do it. Sell your Jay and Silent Bob Strike Back DVDs, give the money to charity, and make the pledge. "I will stay out of Cop Out."

Everybody say it with me...

I will stay out of Cop Out.