EXPECTATIONS: It seems silly to expect Monsters University to be the greatest Pixar film ever, considering the last couple have been less than stellar. But that's okay; of the company's first run of hits, I always thought the world of Monsters, Inc. most deserved another visit. So this is one I've been looking forward to. Recently, though, our editors informed me that this is actually the middle chapter in 2013's Summer of Talking Slugs trilogy, a bridge between Epic and Turbo. You guys somehow found a way to taint this experience for me. Amazing.

REALITY: It's clear that Pixar has entered the Pax Romana phase of its existence. After 15 years of ruling the world by simply being the best, Pixar now seems content to churn out easy-money projects.Monsters University finds the company resting on its laurels while it works out its next move. Which is fine. The company is fine, the movie is fine, everything is fine. Monsters University is no instant classic, but it achieves enough of what it sets out to do without falling flat on its face. 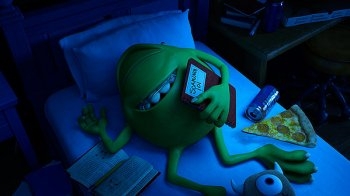 Every kid will want one.Set many years before the events of Monsters, Inc., the film finds fresh-faced eyeball Mike Wazowski (Billy Crystal) starting his first year of college. His dream of graduating from the College of Scaring is dashed when a lazy legacy student named Sully (John Goodman) gets the two kicked out of the program. Mike then strikes up a deal with Dean Hardscrabble (a fantastic Helen Mirren): If Mike and Sully win the school's Scare Games competition, the dean must allow them back into the program. To win the games, the two join the only fraternity that'll have them: Oozma Kappa, a fraternity for monsters deemed totally unscary.

Monsters University follows the plot of Revenge of the Nerds almost to the letter, though mercifully without all the awful rape jokes and racial stereotypes. The other difference is that this is a more nuanced film than Revenge of the Nerds, namely because the film is smart enough to examine the question of academics versus instinct. There was never any question that the Nerds were going to go on to bigger and brighter futures than the Alpha Betas. Here, though, the monsters' academics are so tied to their identity that the best scarers are automatically characterized as jocks, led by a walking smug-face with horns and a letterman jacket (voiced by human smug-face Nathan Fillion).

The same way that Cars 2 built an entire story around exposing what a joke the character Tow Mater is, Monsters shows us just how ill-suited Mike Wazowski is for the whole scaring industry. In fact, the film's greatest strength lies in establishing why Mike and Sully are two characters who need each other. Despite knowing every trick in the book, Mike can't execute them because he's a cuddly little eyeball with feet and Billy Crystal's nasally voice. On the opposite end of the spectrum, Sully has an imposing demeanor and John Goodman's big, booming voice; a natural scarer. The two initially hate each other's innate talents, but soon figure out how to use those talents in tandem.

Crafting stories with real stakes and emotional resonance is one of Pixar's calling cards, and it's something that Monsters, Inc. pulled off almost in spite of itself. Monsters U, on the other hand, seems content with simply being an entertaining ride. The most daring this film ever gets is when Dean Hardscrabble suggests that some monsters aren't cut out for scaring. What is a monster meant for, if not for scaring? Personally, I'm not cut out to be a doctor. I could never be a rocket scientist, or even a math teacher. I have plenty of other skills, though, that don't define my identity as a human being. Mike Wazowski is told to his face that he is not a scary monster, and instead of filling him with existential dread, the notion only makes him more determined. 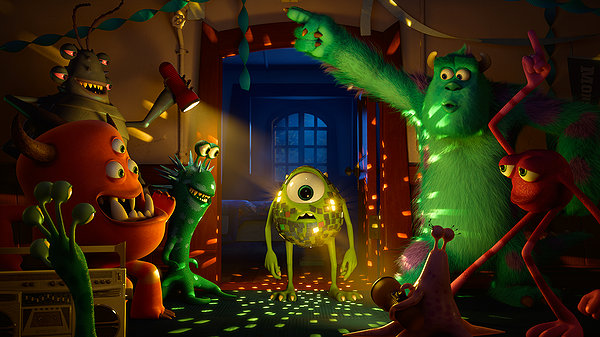 I think this definitely counts as the "animated movie dance party."


The film tries to lampshade this idea by showing us other departments on campus, including door technology and scare-canister maintenance, but these are almost universally presented as schools for lesser monsters. The monsters in these departments look utterly defeated by life, suggesting that there might have been an even darker version of this story at some point. It's good that the film doesn't explore this avenue, though, because the last thing the Internet needs is a reason to map out an entire caste system for the Monsters universe.

It helps that this universe is a perfect excuse for Pixar's stable of animators to design as many goofy cartoon characters as they possibly can. This is a colorful world filled with two-headed snake people, giant lizard things, orange pigs covered in fur and, yes, talking slugs. Of the film's new cast of characters, my favorite has to be Art (Charlie Day), a purple tube with arms that seems ergonomically designed for breakdancing. There's something hypnotic in the way he moves, and the film as a whole is at its best when its characters are traversing obstacle courses and running through crowds of people.

While no one would call Monsters University's style particularly ambitious, that doesn't stop Pixar from sneaking in grade-A animation around the periphery. Mike and Sully look the same as they always have, but their surroundings are amazingly photorealistic. The film perfectly captures the look and feel of an Ivy League university, but it also gives us forest scenes far more lifelike than anything Pixar has pulled off before. The short that precedes the film, The Blue Umbrella, is even more astonishingly realistic, showing off Pixar's ability to render a rainy cityscape that outdoes many live-action films. That dedication to craft carries over into Monsters as well. The company still earns points for showcasing some of the best artists around, if perhaps no longer the best storytellers.

MINORITY REPORT: I really hope Billy Crystal does more voiceover work in future. Not because he's especially well suited to it, just because his face is such a mess of plastic surgery mistakes that it's hard to look at him on screen anymore. Did anyone even see Parental Guidance? No, because you were too scared of the monster in the trailer. - Ian "Professor Clumsy" Maddison