The Kids Finally Finished Their 9/11 Tribute!

For the past year and a half, I've been teaching a class at my local primary school. And yesterday, I finally finished collating their 9/11 tribute-slash-mandatory social studies poetry project! While I am sorry we didn't have it finished in time for the anniversary of 9/11 itself, I think taking a bit of extra time has really made a difference - both in the quality of the work, and to the kids themselves. Please enjoy this dignified, respectful tribute to the famous 9/11 boondoggle of aught 1. -g0m

N ine eleven
I hate the evil people who did this
N o. don't like them.
E vil people blew up the twin towers on 9/11
e
l So sad thinking aboutit
v
e
n ever forget
COPY RIGHT JOSH!!!!!

Poem by a kitten

I love my mother
And sister or brother
I have black fur and claws
And eyes and paws
Later I will have a bun
But for now I am done!

[Editor's note: Emma was sick the day I was giving out the assignment, however, she is an extremely creative child, and I'm very proud of how much she's improved.] 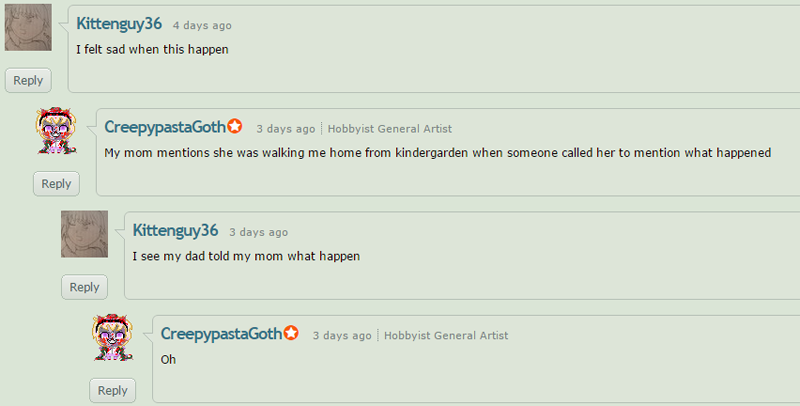 [Editor's note: A collaborative effort by Kittenguy36 and CreepypastaGoth! Good use of personal feelings in relation to the topic. Stellar. Call it a hunch, but I think they're DEFINITELY going to graduate this year. This deserves the highest accolade I am legally allowed to bestow in the classroom - a participation award.]

[Editor's note: I do NOT approve of Jeremy's use of salty language in this poem. It is only included here for completeness' sake. Good use of whitespace!]

Back in 2001 in New york.
Things were busy like wine with a cork.
Suddenly there was a plane.
And suddenly it start to rain.
But into a building it crashed.
And it did into the building smash.
RIP TO THE PEOPLE DEAD IN 9/11. YOU ARE IN HEAVEN. GOD BLESS FIRE MEN

[Editor's note: OK, well, as you can see it was clearly a mistake to tell Angelgirl10 that "not all poems have to rhyme." Still, good effort, and a positive message at the end.]

Once upon a time there was a city called New York. It is very big and had a lot of people from all around the world. There was a lot of shops. One day a bad man named USAMA bin laden flew a plane into a pair of buildings called the twin towers. The twin towers originally opened on April 4, 1973.

[Editor's note: While I do not condone tattling, Jeremy honestly is a real shit of a child.]