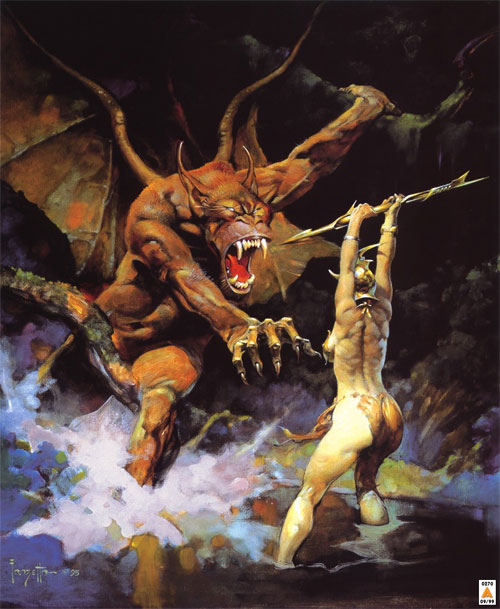 Zack: Not all of Frazetta's women are helpless damsels. In what would become a tradition for fantasy art, Frazetta created the image of the topless, muscular woman fighting the giant beast.

Steve: There's nothing wrong with a babe being comfortable with her body. I'm totally pro-feminist. I'm all about babe rights. That doesn't mean you have to be afraid of your hooters.

Zack: Ladies, don't blame Steve. He views everything through the context of fantasy artwork.

Steve: No apologies! Frazetta was a pro-babe artist. Sure, for dramatic purposes some of his babes might be protected by a barbarian or two, but sometimes they would be fighting on their own, like real warrior women. You've heard of Joan of Arc. Was she sexist?

Zack: I don't even know how to answer that.

Steve: The answer is no, of course not, because how could a woman be sexist? She can't be and Joan of Arc fought the British. Like Benjamin Franklin.

Steve: No way, he was one of the Founding Fathers.

Zack: Some of his aphorisms were pretty suspect. "A dish will never wash itself so choose your woman wisely." What the hell is that?