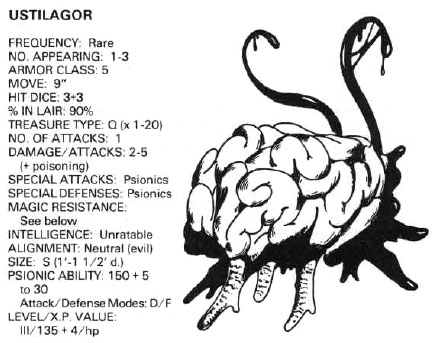 Steve: My health teacher showed us this one too. The brain of a smoker.

Zack: Why do I keep hearing a theremin?

Steve: I don't know. I keep hearing this clicking like my hard drive is trying to do something and my cursor will flash to the hour glass, but only for a split second. And it keeps doing it.

Zack: Alright, what you'll need is a large jar and a set of medical tongs.

Steve: I have pasta tongs and a Sam's Club jar of peanut butter, but I have to eat all of the peanut butter first.

Zack: I once again appreciate TSR's inability to rate the intelligence of the creature, yet they can rate its alignment.

Steve: You do that all the time with republicans.

Steve: Maybe it has a little German armband on one of its brain arms.

Zack: It appears on a list of communist sympathizers.

Steve: There is a prophecy predicting its arrival in the East wearing a blue turban.

Zack: It directed a straight to DVD National Lampoon's movie.