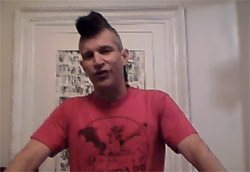 The World of Synnibarr was a sci-fi/fantasy crossover roleplaying game from the 80s and 90s that weighed in at almost 500 pages. It was an extremely silly mess packed with everything you can imagine all governed by an unwieldy rule set. A description of the cover art within the book pretty much summarizes Synnibarr's "kitchen sink" juvenilia: "A thermal drake breathing fire on a Mutant driving an antigravity bike while a Mage Warrior blocks the flames with a shield."

We wrote about the 1993 edition of Synnibarr back in 2010 and detailed some of the post-Synnibarr life of the game's unique creator, Raven c.s. McCracken, like his lingerie TV show and his upcoming novel, "I Eat Butterflies." We love Raven c.s. McCracken. Unconditionally. Mohawked? Oddball? Martial artist? Insufferable auteur? Yes to all of the above.

Synnibarr was a nearly unplayable train wreck, but it had the heart of a thousand revised and refined RPG systems. Think of it as the silliness of Rifts, all crammed into one book, conceived long before Kevin Siembieda ate bad shrimp and had a fever dream about women in bikinis fighting robot skulls in Mexico vampire temples. Synnibarr is what Steve might release if he were creating an RPG.

The attention to Synnibarr in recent years prompted McCracken to attempt a Kickstarter to raise $55,000 to fund the release of a new edition of Synnibarr and several accompanying books. Like everything about Synnibarr, McCracken's ambition and ideas exceeded reality. Funding stalled out with less than a tenth of the amount raised.

McCracken was undeterred. He has since launched a second Kickstarter, intended to fund the release of just the core rulebook of the new Synnibarr: Invicta. Even better, this Kickstarter includes a video of McCracken, complete with an image of the famous "bored raccoon with RPG," in which McCracken describes the new product.

The fundraising goal is $4,500 and he might not make it without your help. For $15 you get PDFs galore from McCracken and a chance to fund the rebirth of one of the forgotten RPGs of the 1990s. But, more importantly, we are going to get to see what McCracken has come up with over the past 20 years. Could it possibly top what he has already given this world?

On the following pages you will find a few gems from the world of Synnibarr. If you are already convinced, please, go help fund the launch of Synnibarr: Invicta. We're not saying it's going to be something good, but we're saying it sure will be something.