Steve and Zack continue their journey through the Mansions of Madness, a collection of adventure scenarios for the 1920s era Call of Cthulhu. In our first installment, Mister Corbitt, we introduced our investigators as julep-swilling dandy, Cecil Talbot, spinster sisters with an interest in the occult, Wanda and Regina Shackleford, stag film actress Sharon Derriere, and the inscrutable Chang the Celestial, who is secretly Mexican. There was also the unfortunate Great War aviator, Pips Codswallop, who went mad at the sight of the horror in Mister Corbitt's manse and shot himself to death. In our first adventure, Zack played Cecil Talbot and Steve was the Keeper. In this adventure, the roles are reversed, with Steve bringing a new hero to the fore. 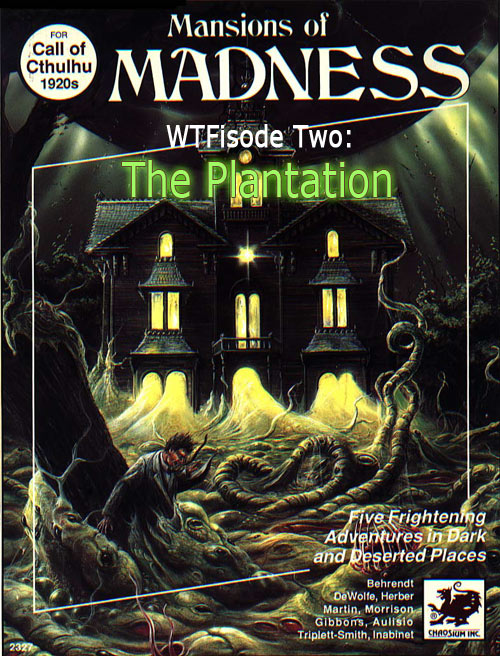 Zack: Are you ready to return to the horror realm where nothing is as it seems and vast, alien intelligences conspire against humanity?

Zack: I've read through the adventure and I can already warn you: investigators are going to die-ie-ie. So be prepared to accept reinforcements.

Steve: I made a new commander investigator named the Astounding Samson. He is a retired circus strongman, real name Ivan Karnov. He's super strong and wears a singlet and weight belt everywhere. He has a bald head, a bushy handlebar mustache and a surprisingly large gut because he eats his stress. He's got an interest in the occult because of a member of his traveling circus called Rat Kelly, a rat with the face of a beautiful woman who disappeared while the circus was in New England.

Zack: Sounds like your usual romantic scenario. Let's say you met up with the other investigators at Pips Codswallop's funeral. You knew him from the Great War. You become fast friends with his grieving companions, particularly Cecil Talbot who admires your "pep" for wearing a singlet to a funeral.

Steve: He wears a big blue trench coat over it at something like a funeral. That's his formal attire.

Zack: I hope you've got a deeper bench than just Samson.

Steve: My B-team is ready to assemble.