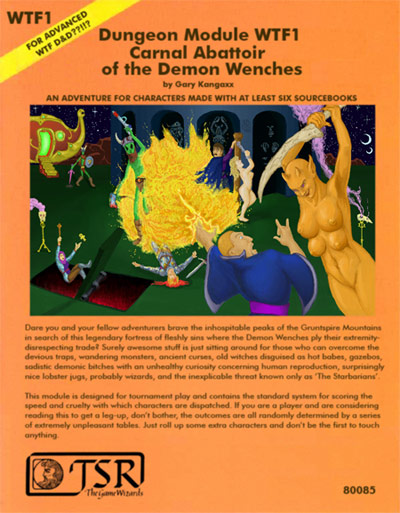 Zack: This one might have won on title alone, but it has so much more going for it. The text of it (which will appear in our future adventure session) includes a random table that is almost guaranteed to kill off the party and a mirror that forces characters to confront the full horror of their alter ego.

Steve: I love the cover. It totally seems like one of those early tournament-based games where you'd have some hooter babe getting sacrificed and like an alien busting in and there was always an Alice in Wonderland reference like right up at the front.

Steve: "Orc" with his head.

Zack: You can't hear me over the Internet but I'm groaning so loud my neighbor is hitting the wall with a broom. 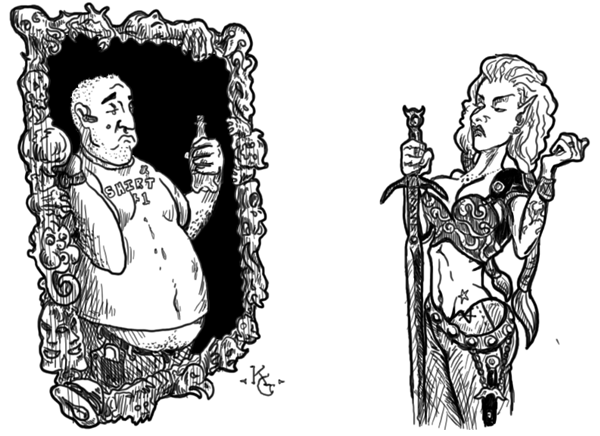 Zack: Grotesque mirror images were a big thing with the entries. I counted four different mirrors. This one was the most disturbing.

Steve: I don't know, I'm sort of having second thoughts. I feel like this one is an attack aimed at me and I just want to clear something up: I have never worn my blue tooth earpiece during a game unless it was combat and my character wasn't in the room or was incapacitated.

Steve: Furthermore, if I did get a call I would always go to the next room to do my talking, unless it was the pizza guy and he just needed directions on how to find Jamie's door on his house (you have to go in through the basement because of his mom).

Zack: Thou doth protesteth just about the right amount.