58 - Body: Skeletal human.
29 - Head: Human; no horror factor bonus.
97 - Nose: No nose; not even an opening for one.
13 - Eyes: Huge almond-shaped eyes that glow red like a fire or sparkling gold, yellow, amber, or orange.
57 - Mouth: Large toad mouth, no lips, just a long slit for a mouth filled with tiny, sharp teeth.
84 - Arms: Five arms of equal size and proportion; adds one additional attack per melee round.
100 - Legs: No feet or legs, snail-like trunk; slithers.
22 - Other: Pair of large horns.
89 - Skin: Stark White or Ivory 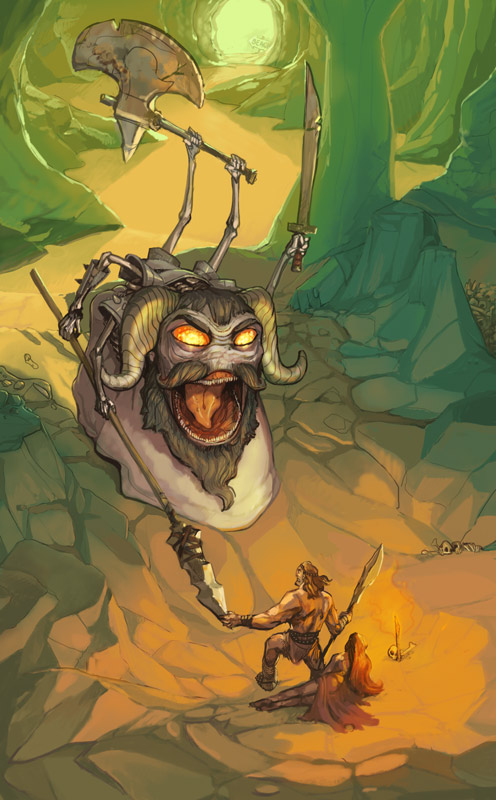 Description: A foul mix of several beings, legend goes this ancient demon either devours its prey whole or chops off limbs to add to its own. It hides in caves, asleep in a pool of its own slime until awakened by unsuspecting adventurers. Wielding its corroded weapons it will try to add more parts to stick above its snail-like trunk.

Old Man Bigmouth's main strength is its inability to smell.

Zack: Congratulations Gnap! Your name comes with a free exclamation mark for me!

Steve: This guy or gal or whatever owned so much. They did two amazing images (the second one is at the top of the next page) and they look they could probably professionally do artwork for TSR.

Steve: You're terrible artwork. You are! Most TSR products were the best. Shut up!