Thursday, Jan 19, 2006 by Zack "Geist Editor" Parsons (@sexyfacts4u)
Fashion SWAT is back from a brief hiatus with a look at some of the worst video covers Mexico has to offer.

Dr. Thorpe:We here at Fashion SWAT realize that haute couture is supposed to be flamboyant, ridiculous, and thought-provoking. However, while this may explain the actions of fashion designers, it does little in the way of excusing them.

Zack:As bad as the movie posters were in Bollywood SWAT they had a sort of naive charm. The Mexican video covers in this edition of Fashion SWAT are so aggressively bad that they could be categorized as "hostile." They are maraudingly bad.

Dr. Thorpe:Has the long wait since the last Fashion SWAT left you feeling violated and abandoned? Have no fear: we're back with some of the strangest and most magnificent images in our long history. As far as we know, these images aren't available anywhere else on the internet, so enjoy a true Fashion SWAT exclusive! Special thanks to Old Town Video for letting me take photos of their awesome movies. 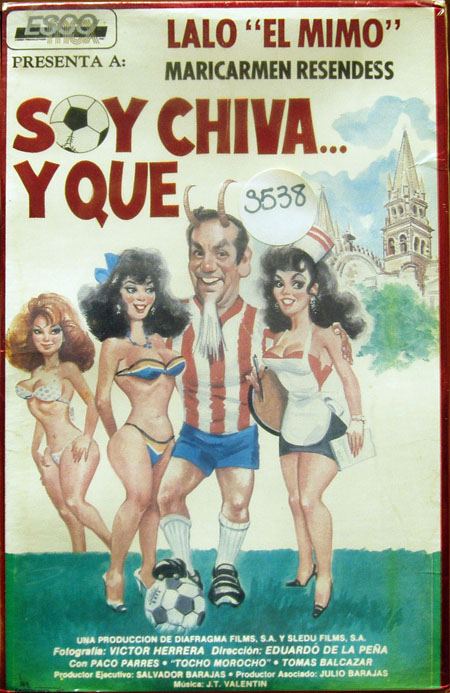 Zack:Half of the movie is him biting through tin cans that are securing bikinis to women's chests.

Dr. Thorpe:Yeah, the sound effects in this movie are intense. There's that clanging chomp when he bites the can followed by that awesome slide-whistle "whoooop" of the bikini flying off, and then an extended sped-up chase-and-giggle sequence. Which is why it won the Academy Award in 1978 for Best Foreign Film.

Zack:I'm sure there is a sequence where they secure a bell around his neck so they know when he is sneaking up on them but in a totally crazy mix-up someone else has one of those bells. Like an old man in a bed with his head bandaged like a cartoon character with a toothache. The goat came to teach them soccer, but they also learned a lot about love.

Zack:Both brunettes have hair that looks like something you would see float up from your drain when you're running a bath. Next time I'll make sure there isn't a tiny nubile Mexican woman attached before I throw them in the garbage.

Dr. Thorpe:Yes, you have to smash those things up before you throw them out, or they might attract goats. Which can lead to extended romping sequences until you get your house fumigated.

Zack:I had a goat infestation in my attic for three weeks. I couldn't sleep with all the slide-whistling and trilling.

Dr. Thorpe:Yeah, that's why you have to be really vigilant about clearing all the Nubilitas from your drain. Goats are as randy and irrepressible as Mexican comedies, and they smell just as bad, too.

Zack:The goats generally telegraph their jokes a little bit less. You might actually be surprised once in a while when you're chasing one and a series of progressively smaller balls fall off of a shelf and hit you on the head.

Zack:It might be a bit early to get into this discussion, but I think all Mexican comedies - even the sexual ones - are designed for children. If it weren't for their blood-drenched action movies I would think all of Mexico was just an arid land of swarthy tots, tittering and chasing after candy or women's breasts.

Zack:I think it's more rooted in their Aztec cultural influence. The Aztecs were absolutely wild for sophomoric slapstick. If the Sun King Tenotl didn't push his butt out and toot a hymn with flatulence then the ritual slaughter of 1,000 prisoners just was not the same.

Dr. Thorpe:You'll notice from this that most comedic actors in these movies have nicknames, like "El Mimo" and "Tocho Morocho." We should start doing that with American actors, too: Jim "Diminishing Returns" Carrey, or Adam "Increasingly Irrelevant" Sandler.

Dr. Thorpe:You know, speaking of Rob Schneider, I'm not entirely convinced that his movies aren't just remakes of Mexican comedies. All the elements are there, basically.

Zack:Except the slide-whistle. Our joyless bog-dwelling ancestors prevent us from using slide-whistles in our movies. Mexicans can just cut loose and have fun, we've got some chemical memory from ten generations ago of a swamp bear emerging from a bog and pulling us down to the depths to an air pocket where it will gnaw on us over a period of weeks.

Zack:I'm pretty sure Rob Schneider's entire cinematic career is based on the concept of how horrible sexual intercourse is. Can you imagine a Mexican movie like that? Not one that's a comedy. Maybe like, "Tragidad Sexos Horriblos."

Dr. Thorpe:Rob "Flaco" Schneider presente: El Traumatico de Sexo IV. I think we can attribute seriousness to lack of naps. We don't get a nap in the middle of the day, so we're all way too stressed-out and cranky to enjoy things like slide-whistles and close-ups of jiggling boobs. We see jiggling boobs and we say "take them away, I'm too tired and pissed off for those."

Zack:"I feel like I shouldn't look at them, like there is something deeply wrong with the sight of them. They disgust me."

Dr. Thorpe:Have you ever taken a nap in the middle of the day? Seriously, try it, you'll get all pepped up and sexually harrass every woman within a hundred yards of you, and they'll love it.

Zack:I'll have to try it some time. Just park it under a tree like the guys who hang around outside my apartment building and then wake up and chase some zaftig woman with giant hair through a series of doors.

Dr. Thorpe:Once I took a ten-minute nap between classes and before I knew it I was in the women's locker room dressed like a nun, lasciviously lifting up my habit at them and making dog noises. All the giggling made my ears ring for a week.