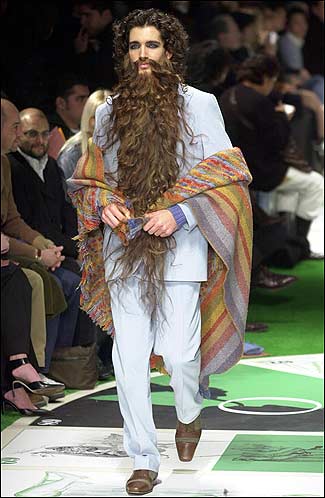 Dr. Thorpe:He looks like some sort of messianic business figure, like maybe a guy who businesses have flown in specially to teach weird seminars. He shows up in his powder blue suit with his outrageous recluse beard and hippie poncho, and starts spouting near-incomprehensible quasi-religious business rhetoric. "In the world of business, the world of ANGELS and DEMONS, you must remain true to the PATH OF DOOM"

Zack:He has charts and graphs where one axis is Greek letters and the other is years on the Chinese calendar.

Dr. Thorpe:And when he's finished with one chart, he touches it with his pinky and it bursts into flames.

Zack:After his speech he holds a Q&A session where you have to begin each sentence with a word "that pleases his senses" and if you fail then you are condemned to "eternity outside the light". Which means no bagels at the bruncheon.

Dr. Thorpe:If someone asks a really good question, he says "You are like a child. Your beauty makes me weep." And then he hides his face in his beard and sobs for half an hour, overcome by emotions too overwhelming for sane people to understand.

Zack:Have you ever seen one of those Wal*Mart employee conventions? I saw one of those on Frontline one time and they have tens of thousands of people in a convention center and they make them sing all of these song and do all of these ridiculous Wal*Mart chants. This is the kind of guy I picture as the CEO of Wal*Mart. He only comes out once a year at these huge conventions. People faint at the sight of him and quiver with ecstasy at his touch.

Dr. Thorpe:Yeah, just imagine him walking out in front of all those teenagers and post-retirees and just standing there with that look on his face, stroking his beard. He's almost motionless for maybe ten minutes, and then slowly he starts to dance, his body gyrating and whirling and his limbs jutting at impossible angles.

Zack:When he gives his fiscal report speech two women in white robes take his poncho and place it on a huge gold-painted bull that has been tranquilized to sit on its haunches next to him throughout the whole speech.

Zack:Yes, definitely. This guy wouldn't look out of place in the Vatican City on the Pope Balcony waving slowly to the adoring crowd. Of course I also get the feeling that the phrase "pronounce sentence" would come up with him a lot more than with the Pope.

Dr. Thorpe:I think it's this guy's facial expression, that pure calm and sympathy, that makes his so great. You can imagine that face doing so many things. Like, imagine one of his followers handing him a fluffy little yellow chick, and he turns it over in his hands and observes it and maybe laughs a little, and then with that same look on his face he just shoves it in his mouth and devours it. And everyone is so shocked, they don't know what to make of it, but somehow the calm on his face tells them that it was an act of love.

Zack:This guy is Etro. He has to be.

Dr. Thorpe:Yeah, definitely. He's on a whole different plane. He's the mastermind of all this atrocity. He's the kind of guy that prompts questions like "but how can you love a being so cruel?" And answers like "his cruelty is like velvet upon my skin."

Dr. Thorpe:At the end of the runway show, he strides out to the stage, tears welled up in his eyes and that inscrutable calm on his face, and he says "Everybody... everybody must die." And then he smiles a little as the gas starts seeping out.