Valid Reasons For Not Buying Transistor

A big, stupid asshole with a bad face that no one likes.

2. Gameplay Variety And Customization Really Piss You Off 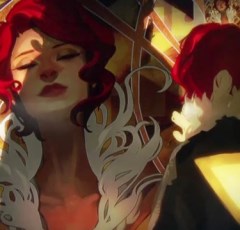 You'll have access to stuns, chaining projectiles, stealth, summons, backstabs, dashes, area of effect explosions, debuffs, charms, shields, traps, life steals, pulls, and more stuff than I could remember off the top of my head. All of which can be granted the core ability of another skill. For instance, you might want to have a dash with a reduced casting cost that causes an explosion at your destination. My personal favorite was a long distance chain shots which bounced between every enemy in a room and dealt damage over time.

Trying out different combinations unlocks information on characters, encouraging you to give everything a shot. It looks like you might get something for trying every single combination of skills. Why am I not sure? I have completed the game and switched every single skill after every fight, and still haven't tried all the possible combinations.

You can play in real time or make full use of the turn-based mode, choreographing a room-clearing whirlwind. You can even jump into turn-based combat then have one skill available to spam while you run around waiting for your pause meter to fill up.

If you hate meaningful control over your playstyle it's all quite rude.

3. You Are Only Capable Of Purchasing Things From A Vending Machine

It's all you know.

4. You Slid Into Baseball Bases Headfirst Too Many Times, And Now The Doctors Say You'll Die If You See Good Art Or Hear Good Music

Jen Zee's art is gorgeous, and here it seems even more dynamic than it was in Bastion. There are lots of stylish breakpoints where scenes turn into a splash pages or scrolling collages in the sky as Red travels from one area to another. The setting's society, architecture, fashion, and entertainment have all been thought out and illustrated in a few relatively simple but evocative character portraits.

If you look at the game your brain injury will kill you.

Of course the music is great. Sometimes it reminds me of Portishead. Mostly it does its own thing and majorly enhances the on-screen events.

If you dove headfirst into too many bases and you listen to this game a mixture of blood and liquefied grey matter will dribble out of your nose. You will die and it will hurt.

5. You're Reading This Ten Thousand Years In The Future

This update was preserved on a granite slab so that it would never be forgotten. You live in a world where our concept of computers and video games are meaningless.

6. You Belong To A Hate Group That Specifically Hates Good, Confident Storytelling

Nothing makes sense at first. People speak naturally, as if they didn't exist solely to vomit exposition. You listen because these characters and concepts are interesting.

The game is a gradual, trippy exploration of a few strange figures and the city they inhabit. It rewards the effort you put into collecting and interpreting seemingly inconsequential scraps.

All of this writing is so competent that if any members of your hate group caught you with this game, you'd be forced to turn in your crimson Utilikilt.

Your head can turn really far. That's great. Here's the thing, though: You've got no hands. If you even have the mental capacity to understand what a video game is, you've never shown an interest. Stop wasting everyone's time.

Transistor
I was already certain that every game with combat would be much better with turn-based options. and now it's obvious that all games need a hum button. 8/10