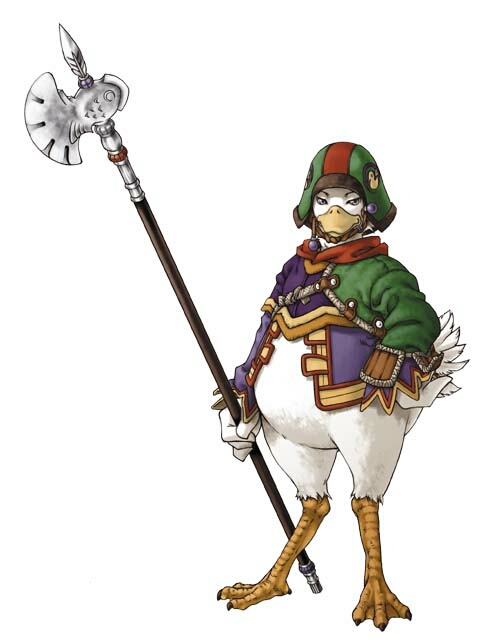 Dr. Thorpe:I don't want to sound racist, but that dude looks exactly like a duck.

Zack:How can you tell it's a dude? They all look the same to me.

Dr. Thorpe:Whoa, you have to be sensitive in these racially charged times. Did you see Kanye on that telethon? "George Bush does not care about ducks."

Zack:I heard they were swinging their halberds at the helicopters trying to rescue them, so honestly I don't care either. It's hard to imagine a more fearsome military force than a bunch of pantless ducks with pole arms. There would be bird shit everywhere in their staging areas and they'd keep running in disorganized mobs towards any dropped bread on the battlefield.

Zack:I would guess it's a sort of subtle anti-war message rather than a standardized unit badge.

Zack:I would like to add a personal anecdote about Suikoden 3. I bought it after the people on our forums raved about it. I sat through roughly half an hour of reading some elaborate, exceedingly impenetrable and melodramatic plot explained in dialogues. Then I saw one of the duck guys and I immediately turned it off. It was an insult. They demand that you take all of the inane exposition seriously and then they show you a duck in armor. "Haha, idiot! You read that shit?"

Dr. Thorpe:You know, I distinctly remember buying that game, but I don't think I ever played it, even once.

Dr. Thorpe:I just looked at my games and it's not there, so hopefully someone borrowed it and never gave it back. Nice!

Zack:In the dark days to come those who have played Suikoden 3 will envy the dead.