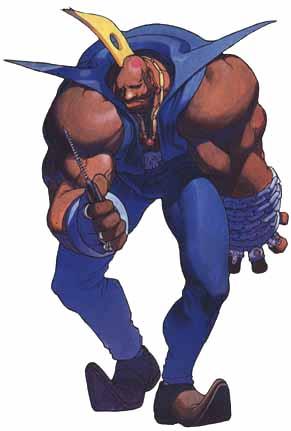 Zack:The hole in his mohawk makes him faster.

Dr. Thorpe:Only when he's running sideways though. Also, the strategically curved shoes make him faster when he's falling down on his face.

Dr. Thorpe:He's so hunched an melancholy, he's got the tragic air of a literary halfwit like Lenny from Of Mice and Men. He just wanted to pet the elves.

Zack:Yeah, I was envisioning some sort of Faulknerian man-child. He has no concept of his own strength or the fragility of those poor elves.

Dr. Thorpe:He's got a hole in his mohawk from getting kicked in the head by a mule when he was a boy.

Zack:Definite evidence of head trauma. I think you can see the outline of a hoof on his skull.

Dr. Thorpe:He's got a potato peeler in his hand. Maybe he joined the army and got put on permanent KP duty because of his low mental faculties.

Zack:I think this is what Japanese people think black hoodlums look like in America: enormous, sad, chained, with a lockpick, a grudge and some sort of cross between a prison uniform and a Buck Rogers costume.

Dr. Thorpe:You'll never see a Japanese depiction of a black man without a knife in his hand. So basically they're like the American media. Think about it: whenever you see Birdie on the news, he's committing a crime.

Zack:Yeah, they never talk about the good things Birdie does like clean our buildings after hours or provide valuable data in our uninformed observational Hepatitis studies.