Today we're rolling in four Escalades tricked out with all the aftermarket bells and whistles a little girl needs. The meat in our sandwich is a black stretch with nothing but some tinted windows to protect the passengers.

"You two," I say to the dumbfucks with the shotguns, "take the limo."

The VIPs will be riding with me in the lead vehicle, but if the nuts hit the blender then that limousine will be taking about 90 percent of any incoming. 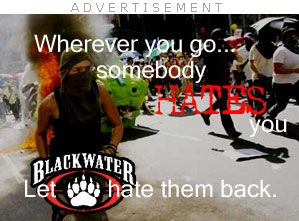 Our VIPs - technically my bosses - share a mansion in the Hollywood Hills. It's a slow drive up winding roads, past derelict houses and burned-out cars. There are a few rock-throwers but the terrain is not exactly conducive to a real ambush. The hills here are just too steep and drop off too close to the roadside.

Near the top of the third hill we hit the community gate. Big concrete bomb-pylons, reinforced gates, shot-zappers for any RPGs and about a dozen guys from one of the big Southeast Asian companies. These are serious business guys who take month long courses on company solidarity and learn how to kung fu fight in an elevator. They all have the same mirrored sunglasses and ridiculous ceramic hard armor.

I roll the window down and show him what he needs to see.

"Hot enough for ya?" I yuck it up for him, lavishing in the Escalade's mighty AC blowers.

"Third house on the right," the guy says to me in this deep voice that rattles my ribcage. "No trouble, no other stops."

The gate opens and we pass into the forbidden city. Broad lawns of green grass straddle the roads. Evergreen hedgerows provide another layer of privacy and protection for each estate. There's a big dog park in the middle of a circle drive. A fucking park for people to walk their dogs.

I can see some blonde I recognize from a sex tape walking a dog that looks gay. It's gray, with long womanly hair framing its snout, and its body looks like it's wearing a corset. I want to yell something nasty at the girl and her gay dog, but I just look away. 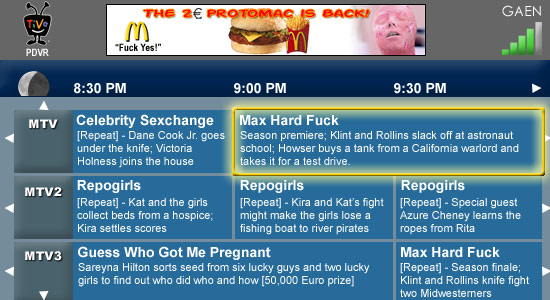 The people in these parts are young and on the third and fourth generation of family money. They're the kids and grandkids and great-grandkids of TV producers, film directors and entertainment moguls. Their parents and grandparents, who might have done something for a living, have fled to Manhattan, New England or one of the Asian powers.

These punks have their parents' fortunes and none of the talent or ambition. But they're what we've got. They're our stars.

"Right there," I point to a silver gate set into a colonnaded archway that is itself detailed in gold leaf and painted tiles.

The gate purrs open as we get close. We roll on up the quartz gravel drive past a staggering expanse of manicured greens, flower gardens, and out-buildings. The illusion of Old Europe is complete when I see the house. It's a replica of Versailles - I recognize it from a book - but it's about half the size and it's sprouting a geodesic glass boil from its back. I don't remember the real deal having all of these satellite dishes either.

Someone has driven a tank into the wall near the main entrance. Looks like an old M1 from the California armory. It's covered in masonry dust and empty beer cans. The turret is turned to face the driveway and there is a huge black double-dildo stuffed into the barrel. I call a stop to the vehicles and we unload. I leave most of the boys standing outside getting overheated.

Me and a couple of guys I picked out as halfway competent approach the steps leading up to the main doors. There's a naked woman sprawled on the steps. She's beet-red from the sun. A trickle of blood from her temple has congealed on the staircase. Her pubic hair is a thin strip of black. She has a key tattooed just above and to the left of her vagina.

"Check her pulse," I tell Eduardo the Mexican.

I've worked with him before. He's a bit scrawny for a trigger-puller, but smart and trustworthy.

"Drag her into the shade," she isn't our problem but I'm not gonna leave a Penthouse Pet to die from sunstroke.

Morrison is my other man, a big dark-skinned black guy with nervous eyes. I picked him because I recognized him as a former fullback, played for the Saints before the Gulf ate his town. Moved on to the Sacramento Meteors and I was there the game where he blew out his knee. Ran forty yards on a play-action fake and got t-boned by a freight train from St. Louis. He seemed to like being remembered and he smiled easy, not a common trait among jacked-up gunslingers.

Morrison and Eduardo drag the girl up the steps and dump her in the shadow of the building. There's no doorbell, but I can see cameras so I just walk on in. It's cool and dark inside. The Moroccan carpets are singed and stained, but the vaulted ceilings are still kind of breathtaking.