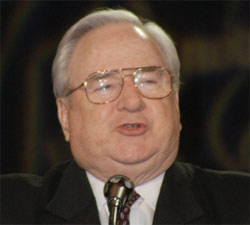 "There is nothing so beautiful as a married man and a married woman completely ignoring the eight children they are relying on the government to support." - Carved into a piece of driftwood while vacationing in Florida. (1990)

"Adoption should be a thing between a man, a woman, and an Eastern European or Chinese baby broker." - Screamed at a baby riding a pony. (1994)

"I have two wives. I have been married to one wife, Jesus Christ, for going on 70 years now. We make love every day, tenderly and prayerfully. Wait, that sounds creepy, can you just put, 'The only love I need is my love for Jesus Christ?'" - During an interview with Highlights for Kids. (2002)

"If I had to marry again I think I would like to marry a woman large enough to carry me in a papoose. Do they have those women? Like a nine or ten footer?" - Posted in the comments for an article about network security on Digg. (2006) 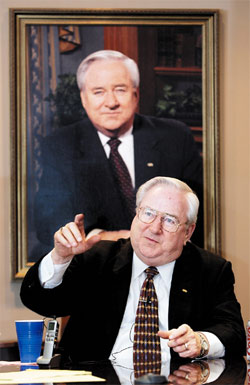 "Women are one of God's most beautiful and magnificent creations. They are superior to every animal in the Kingdom of God. For example, when was the last time you witnessed a horse administer douche to itself? Once per decade, at the most." - Opening comments at Iowa's AgriFest. (1977)

"I fully support a woman's right to choose…which pie she gonna make me in the kitchen. He he, you see what I done there? Awwww yeah!" - Said to his wife at the dinner table. (1984)

"The Muslims oppress their women. They demand they hide meekly in their homes and conceal the bodies that God gave them beneath restrictive garments. The garments we allow show nearly 20% more of the woman's body, making our religion 20% better!" - Answer to a story problem on a math quiz. (1991)

"The media constantly exploits and demeans women for their sexuality. I prefer that we try to find a way to harness their sexuality for industrial purposes. Possibly some sort of camel toe or under boob based electricity." - Transmitted via telegraph to a receiving station in England. (2002)

"One of the goals of the Bible Research Institute in the coming decade will be to develop a device or detector that can identify homosexuals. From there it's just a matter of projecting the right sort of energy stream to throw the demon out of their body and capture it in one of these containment devices we call 'gay traps'." - Shouted out the window of his car at a car wash girl. (1980)

"I'm still working out what this 'gay' stuff is, but I think I might have just figured it out today." - Commented to assistant as they left a performance of the Blue Man Group. (2000)

"This is the manifestation of God's wrath. It is a reaction to the spread of amoral secularism and degenerate homosexuality. America had this coming." - After stubbing his toe in the kitchen of his home. (2002)

Jerry Falwell, legend, uniter, champion of the underdogs; you will be missed. From the heart of every American, I offer our prayers.