I wiped down the rim of my Saffron Vanilla Chai Quench with an anti-bacterial towlette and turned to confront him. I was surprised to come face-to-face with Jan Galviono, the eccentric Maltese model turned fashion designer made infamous for recent comments about the World Trade Center and Judaism.

It was then that I realized he was pointing a silver handgun at me. Silver, but not a gay Luger.

"I have no idea what you're talking about," I said, although I recall from a Japanese Special FX magazine from 2000 I recently read in my Asian fusion barbershop Coiffe Suey that Keanu Reeves wore nothing but frock coats during the filming of the Matrix and for years afterwards.

"My frock coat," he reached into his pocket and produced a photograph of his frock coat. Looked a bit Billy Jack by way of Rorke's Drift. 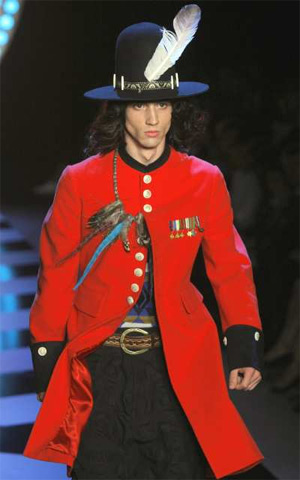 "It is deconstruction of British colonialism as nativism. It is from my Victorian Military collection Master & Commanche and it is priceless. You know where it is. Take me to it. I pay you."

"Yeah," I said. "Sure. I know right where it is, but put that piece away before the MOMA security guard sees us not buying anything and makes me overdraft my Discover on giclees of piss christ."

I have almost perfect recall for all details related to fabrics and the Wachowski Brothers and I still had no idea where to find Galviono's mysterious frock coat. However, with K.M.'s half of the office rent suddenly eating a hole in my wallet I knew I need the revenue.

We flagged down a taxi van and I told the hacker to just drive and don't ask any questions. Just our luck, Cash Cab. I tore it up with my answers Pompeii and pizza napoletana. One more question and we'd make 250 bucks. More than enough to cover K.M.'s half of the rent.

"Other than the USA, what victorious faction of World War II went on to become one of the world's only super powers?"