RE: Our Campus's Boulder Problem 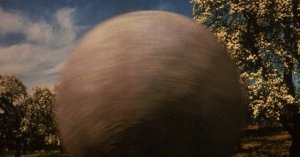 As you know, our campus has seen a rise in boulder-related deaths. Two students, Brent L and Gerard B, are deceased. Another, Jen T, is missing; she was last seen Friday running across the soccer field from a large ice rock. Police are hopeful that she will be found alive, and not too exhausted.

In response to concerns, the Student Health Department has released the following Boulder Safety Tips. Please review them ASAP.

There's a reason Nazi Germany's silver-medalist track team weren't killed by boulders - Hitler made them outrun them every day. In the same spirit of vortrefflichkeit, we urge students to work out as much as they can. Push-ups now avoid smoosh-ups later. Our gym is open 7 days a week and welcomes newcomers. And don't worry, it's a judgment-free zone. Any taunts, jeers, noogies, titty-twisters or sissy-swirls are just incentive to ditch those spare pounds. Once you've escaped a two-ton rock, you'll thank our "gym rats" for their tough love. 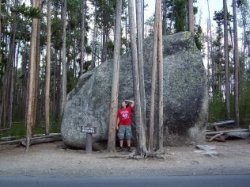 Keep your eyes peeled; boulders could be anywhere.Be Alert

It's a stone-cold fact that 90% of boulder attacks are ambushes. Staying alive means staying on your toes. If you hear rumbling down the hall, don't assume it's an Atlasphere. If you see a round blob in your peephole, think twice before letting in the "Kool-Aid Man." When using a bathroom, always check the handicapped stall: if it's closed, shout "Is there a boulder in there?" If no one answers, call security immediately.

Boulder Dashing: A Recipe for Disaster

"Boulder Dashing" is a hazing ritual popularized by the JVC game Boulder Dash. It consists of getting pledges drunk, then dragging them to a hill and making them run from a boulder while onlookers pelt them with eggs. Variations include multiple boulders and leaping over pits. It may sound like harmless fun, but it's extremely dangerous - statistically, it kills more people than unreported shootings and stabbings combined. If anyone tries to coerce you into Boulder Dashing, notify your advisor. Students caught Boulder Dashing face fines, probation, and removal from the Beer Pong Wall of Fame in our Rolling Rock Pub.

Anyone who's played Crash Bandicoot to the part where you're chased by a boulder through a tunnel will tell you it's no fun - the chase, not the game, which overall is a platforming classic. Heed their advice: When crossing campus, avoid tunnels, corridors, catacombs and any other cramped areas. They may look cozy, but when you're on the wrong side of a boulder, they're a veritable tomb. Our own Gerard B died playing "chicken" with a boulder in the pedestrian tunnel - he ran 500 feet before succumbing to a leg cramp. To prevent more incidents, the tunnel has been closed, along with our labyrinth, hedge maze, Penrose staircase, and Aggro Crag. 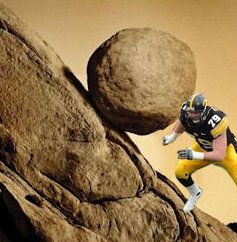 Vigilantes only endanger themselves and others.Remain Calm

Outrage over Brent and Gerard's deaths has sparked anti-boulder demonstrations across campus. We sympathize with demonstrators, but ask that they not lose their heads. Vigilantism, however well-meaning, only puts more lives at risk, and we do not appreciate the "raid" on the gym that destroyed several soccer balls. Nor will we tolerate harassment of so-called "boulder sympathizers." Several Indiana Jones fans have already withdrawn for the semester.

Finally, whoever kidnapped The University of Boulder's mascot and hung him from our flagpole will be expelled. Boulder U. is completely unaffiliated with boulders; it's also more than 2,000 miles away.