Hey, everybody! What's up? Not much on my end other than THE SWEETEST FRICKING MINIATURE COMPETITION OF THE YEAR!!!! I, Steve Hieronymus Sumner, am super pumped to announce the winners of my first annual 2008 Golden Hotbabe Awards for excellence in the field of miniatures. 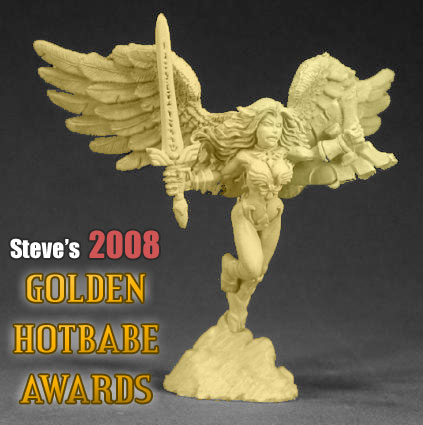 I have applied my knowledge of miniatures and my appreciation of artistry in general to create the fairest miniature awards ever. The best thing about this contest for the people entering it is that you don't have to enter it! I just found this stuff on the Internet, so just put yourself up on the Internet with some sweet minis and I'll probably find you next year.

The not-so-sweet thing about this year's contest is that I didn't get a sponsor. I talked to James Warkshop for like two weeks and everything seemed fine and then I realized I needed to talk to Games Workshop. Did you guys know there are two phone books in a phone book? One is regular and the other is yellow. James Warkshop lives in the regular part and he turned out to be a liar and a pretty big jerk. Games Workshop is sweet as heck and never lies about anything except what happened to the Squats and they live in the yellow part of the phone book. Something to keep in mind.

The awards are divided into two categories: manufacturer's awards and artist's awards. When judging each award I used three criteria:

Sweetness - Most important. When you check out this miniature do you feel like pumpin' a fist and going, "Yesssss!"

Badassness - If this miniature came to life and was regular sized would it totally wail on your face over nothing?

Hotness - Dude figures and monsters score a zero, but some categories assign very low importance to the hotness criteria. Babe figures dominate this, but also some elementals that used a loophole in the written rules that will be removed for next year.

I think that's just about enough explaining of the rules and what have you, so on to the awards. Judged by me and a couple by Keith when I asked him and described them to him over the phone.