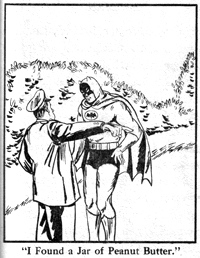 The Head Guard is telling Batman a story from his day to distract him because he doesn't know anything about the snakes. He also wants to explain the face he was making. He expects Batman to believe his lips were stuck that way because he ate some peanut butter. Batman doesn't believe this explanation, or even care that the Head Guard eats food he just finds, as if he didn't know that all meals should be Tested. He just wants to know about snakes. Batman can't handle two crimes or villains at once. 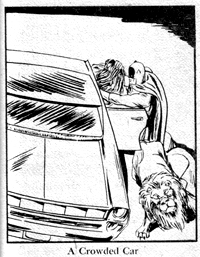 Batman learns the Head Guard's secret, and he wants love animals of his own. He has to put them in a car, because he is unable to fly like a real hero. It is not dignified for heroes to fill cars with lions. If I am called upon to load assorted animals into a transportation colossus, I will do so without questioning, but I will feel shame. 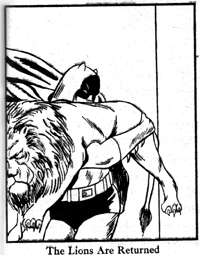 The lion did not enjoy his evening with Batman. He is tired and glum. The radioactive heroes are better at love way with animals, because they are part animal themselves. They know all the love tricks of spiders and fish. 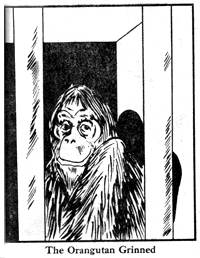 The orangutan wants to be Batman's love. He did not listen when the lion said Batman was not a real hero. Monkeys are supposed to be smart, but there is a lot they don't know about love way with costumed men. 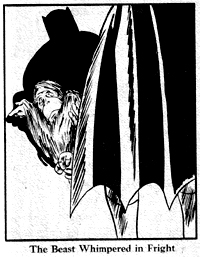 Batman dreams that one of the animals he loves will be radioactive, and his baby will be a real hero and won't have to work so hard. It is a nice person ambition, Instructor. But the orangutan fears his rubbery touch.