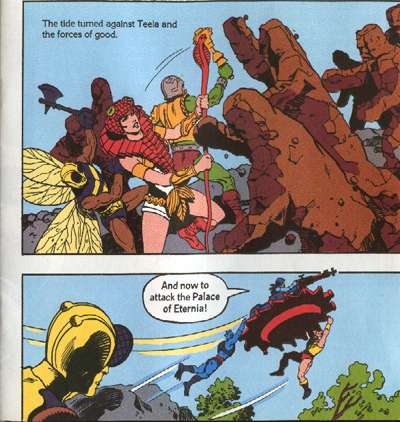 Soon Teela, Man-at-Arms, and the ever idiotic Buzz-Off find themselves outnumbered by the giant, hulking, lumbering wads of rock who appear to attack by waving their arms in a vaguely menacing fashion. Skeletor flies off in his giant floating gear, which Jitsu and Webstor clutch onto for their very lives. I can imagine how horrible Skeletor's minions must feel; day in and day out they're a slave to Skeletor's will, doing every stupid and pointless thing he commands them to but nothing ever works and Skeletor ends up constantly bitching at them. It must be like working for Gamespy only with a slightly higher salary and more benefits. What the villains of Eternia need is a Badguy Labor Union, one that will stand up to Skeletor and say, "Hey, enough is enough! If you're going to use Jitsu as a human punching bag for two hours while you amass a troop of Rock Warriors, we're going to demand overtime and dental benefits." At that point Skeletor would probably go into one of his screeching tirades, so the union would have their work cut out for them. Skeletor isn't much of a negotiator when it comes to health care packages. 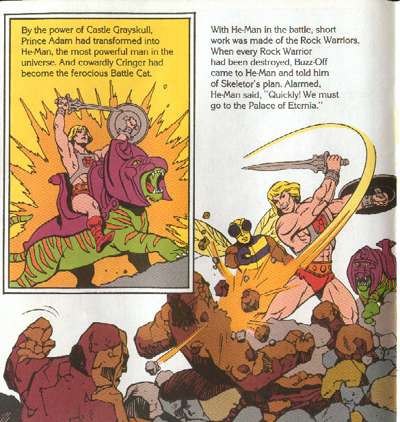 Prince Adam works his Castle Grayskull magic and turns into He-Man, who is exactly like Prince Adam only he wears less clothing. Cringer turns into Battle Cat, who is exactly like Cringer only he's a bit bigger and has more plastic on top of him. He-Man rushes to the scene of battle and defeats all the Rock Warriors, as they apparently grew bored of waving their arms at the spaz in the bumblebee suit. Buzz-Off reveals Skeletor's evil plans to take over the Palace of Eternia, so He-Man (using his world-famous tactical battle skills) decides he should probably go to the Palace of Eternia and spend the required eight minutes necessary to foil Skeletor's current moronic plan.