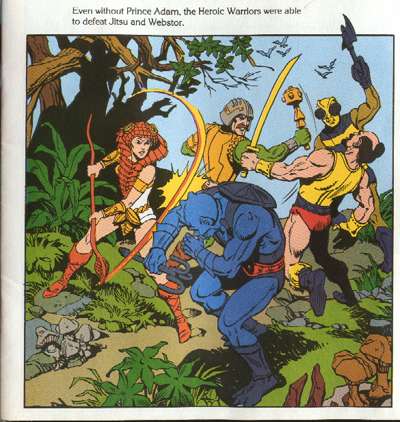 Teela and Man-at-Arms are able to beat up Jitsu and Webstor easily, mainly because the bad guys have the combat skills of a drunken hobo. Unfortunately Buzz-Off finds himself (once again) completely worthless because he has a battle axe which cannot be used in combat. Only blunt melee weapons ever prove to be effective in Eternian combat, as any kind of slashing weapon might kill or injure an enemy, which is a big "no-no" when fighting. If you kill the bad guy, how the hell is he supposed to come back and attack you 15 minutes later? Buzz-Off's only purpose in the He-Man universe was to fly over the bad guys and report back to Prince Adam. Of course nothing he ever had to report was worth the 10-second wait ("He-Man, there are bad guys... and I think they're getting ready to attack!"), so it's only common sense that he'd be utterly void of talent in melee combat as well. 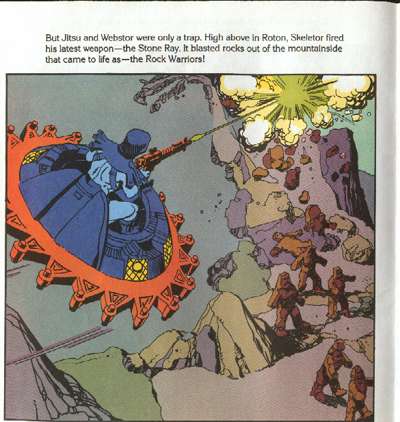 Aha! That ol' Skeletor is up to his tricks again! It turns out Jitsu and Webstor's beating session was merely a distraction to allow Skeletor the time to fly around in a Christmas tree ornament and shoot his goofy new gadget at the side of a mountain! Being the maniacal criminal mastermind that he is, Skeletor didn't invest all his R&D money into a gun which might shoot a laser that causes PHYSICAL HARM to people. No, Skeletor decided to create a gun that turns rocks into... here it comes... ROCK WARRIORS! Hence the title of this book! I love it when things come full circle, don't you?

So Skeletor starts unloading a few rounds of his Stone Ray into the mountain, causing a series of sentient rock monsters to spring to life and immediately do Skeletor's bidding. Since Skeletor never exactly said what his bidding was, I can only assume the Rock Warriors are psychic, which shows off some really excellent planning by the weapons division.