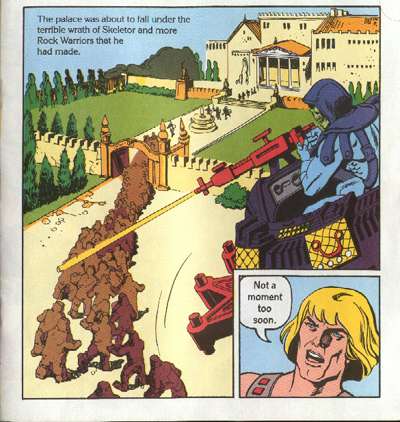 Upon arriving at the Palace of Eternia, He-Man notices that the castle's defenses are about to fall to the mighty powers of the Rock Warriors. Since the castle's "defenses" consist of a few strategically placed shrubs and a series of steps to keep out the handicapped villains, the siege presumably didn't take long. Note that Skeletor seems to have grown weary of shooting his Stone Ray at actual rocks; in this scene he appears to be conjuring badguys from the surrounding Eternia parking lot.

He-Man claims he came "not a moment too soon", which goes to show how lax he is in regards to foiling Skeletor's stupid plans. Most people would be worried about showing up too late and witnessing the palace become overrun by monsters composed primarily of asphalt. Not He-Man though! The most important thing on his mind is showing up too soon and having to wait for Skeletor to begin his attack. After all, he could be spending his precious time looking for metals growing in the woods! 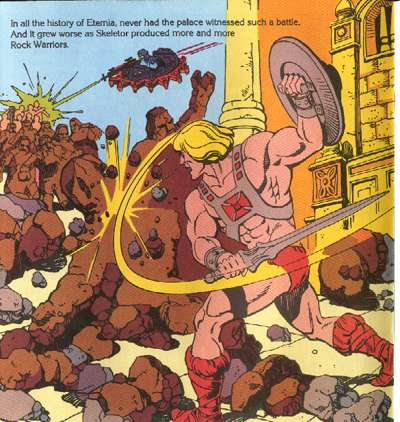 He-Man hits a bunch of rocks with his sword, somehow causing the "battle" to be considered one of the greatest in the history of all Eternia. I don't know about you, but I've seen more intense sideline fights during Pee-Wee football. An endless supply of monsters blindly lunge towards He-Man, who he defeats one after another after another without using any skill or technique whatsoever. I think we've found the inspiration behind Everquest here.