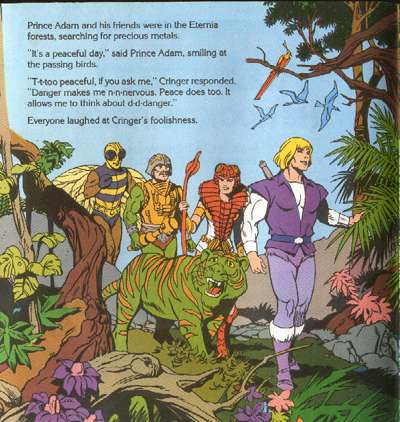 As the story kicks off, Prince Adam and his dangerously incompetent friends are walking through the Eternia forests, "searching for precious metals." In Eternia, precious metals are found growing off trees and bushes, kind of like really inedible fruit that makes you bleed when you try to eat it. While this may seem convenient, as no unwieldy machinery like bulldozers or fat guys wearing construction hats are needed to harvest the metals, it makes camping in the woods really dangerous. One moment you'll be peacefully sitting in your Eternian tent (that's just like an Earth tent only it appears as if the fabric was sown together by a gang of colorblind homosexuals), and the next minute you'll be stone-cold dead because a hunk of Eternia metal dropped off a tree 50 feet above you and crushed your skull like a ladybug under a car tire. This is why the only native creatures seen in the above pictures are birds; all the ground creatures died off eons ago.

Of course the only land-based animal above is Cringer, who is far too scared of being afraid to worry about being scared of worrying about being fearful of falling metals. I never quite understood why Cringer was such a wussy. Here he is, a 400-pound green tiger with teeth that can cut through kevlar armor, yet he's deathly afraid of even getting out of bed in the mornings. Who the hell would even fight a GREEN tiger? You know that thing's gotta be teaming with diseases; why else would it be green in the first place? The gang responds to Cringer's incessant whining by laughing at him, which is what all good friends should ideally do. This also marks the first time Buzz-Off actually laughed at somebody else (instead of the usual scenario involving crowds of children mocking him and throwing rocks at his head). 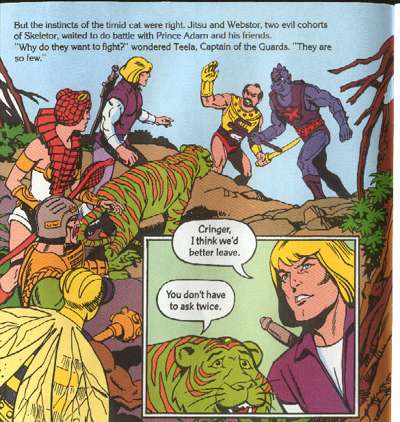 Of course the "instincts of the timid cat were right"! Every fucking time Prince Adam leaves his castle he's attacked by Skeletors' mindless cronies! You can't walk 15 feet in Eternia without being assaulted by some guy in an ape suit waving a magic wand at you! Since nobody's ever suffered any physical harm in Eternia, you don't really have to worry about your well-being there, just having your progress impeded by a man wearing tights and a colorful helmet.

Teela, Captain of the Guards, asks the immortal question, "Why do they want to fight?" which is about the stupidest question ever asked in Eternia. THEY'RE SKELETORS' HENCHGOONS FOR GOD'S SAKE! Fighting and being defeated are the only things they know how to do! Some of the more intelligent cronies also know how to botch up Skeletor's plans to rule Eternia too, but those characters are few and far between. Skeletor seems to only hire the mentally handicapped villains so they'll never show him up in his conquest to build a gigantic robot tree that will look like an ordinary tree only it shoots out invisible rays that makes the King and Queen of Eternia fall asleep so Skeletor can break into their castle and piss on their silverware or whatever idiot scheme he has planned for that hour. Prince Adam and the Cowardly Lion decide to get the hell out of there, as Prince Adam was secretly hoping Buzz-Off would get brained by Webstor, the bad guy who holds the record for "most times defeated by grade school kids."