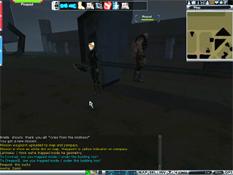 Three victims (myself included) of Omni-Tek's successful "trick building floor" technology.The ultimate goal of the game is to either reach level 175 or realize that the ultimate goal of the game is to reach level 175, thereby resulting in returning the game and canceling your account. People apparently play massively multiplayerly onlinely roleplayingly games because they either crave social interaction with elves or they really like impressing children with their level 180,000 glowing blue armor and sword that shoots bullets which cause your chest to explode. Although the social interaction in AO is limited to "IS NEBODDY ELSE STUCK IN THE BUILDNG?" and "LAGGGG LAGGG LAGGG," there are luckily millions of different weapons and items to find and attempt to equip yourself with. 60% of these items are labeled as "NoName" and serve no purpose, but hey, 40% is still pretty good. If a batter could hit .400 in the major leagues, he'd be pretty popular. Especially if instead of a bat he used a large blue blob called "NoName." If you're not up for social interaction or picking up new and exciting "NoName" items from various radar installations / slums, you can engage in a nice chat with your pet, who will still be stuck in the first room you ever traveled through. I've seen better pathfinding skills on roofing tiles.

The models and graphics are surprisingly good for a massively multiplayerly onlinely roleplayingly game, assuming you can stay logged in long enough to view them. A wide range of character models, animations, skins, and items ensures that your system will crawl to a screeching halt within 500 miles of an outpost or town populated by more than four other people and a functional insurance terminal. Ignore the system requirements listed on the box; those were obviously written for another game, one which was released in the mid-1980's. Instead, take the "suggested requirements" and multiply them by approximately 14 billion to understand the system needed to run this game smoothly. Then multiply that figure by seven billion and you'll be only 10 billion times further away from having a system that can "properly" run AO. Although it's not listed on the back of the box, FunCom recommends having a festive and eye-pleasing Windows desktop background, as that is what you'll be seeing for a good majority of your playtime. 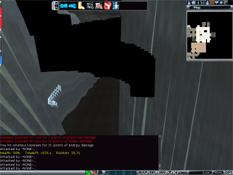 So what's left to say about Anarchy Online, a game that claims to be a massively multiplayer online RPG? First off, the "online" aspect of the game is currently about 30% true, as seven of 10 logins to play the game resulted in either a "SERVER NOT FOUND" error or being kicked back to my desktop within 10 minutes. It doesn't seem to be very "massive," as a good majority of people are stuck in the Omni Entertainment zone with absolutely no chance to leave thanks to lag and invisible forcefields around the city gates. I really can't claim that AO is a "game" since the word "game" insinuates that there is some amount of fun involved, not just running around and doing the same things over and over and over again, which I refer to as "work." Finally, there is very little "roleplaying" exhibited by the players, excluding repeated complaints of lag (from the FUTURE!) and others roleplaying as horny and obnoxious 14-year olds who will hit on anything with a pair of breasts and a shotgun. A more proper title and description for the game would therefore be:

"Anarchy Which is Online a Minority of the Time: A Tiny Multiplayer Semi-Online Non-Role Playing Job That You Pay to Work For"

Granted that doesn't have quite as much of a ring to it, but I don't think FunCom is really worried about dragging their name through the mud at this point. They're too busy researching new and improved ways to make Omni-Tek weapons that force their allies and enemies fall through world geometry and become lodged inside seemingly solid objects, thereby keeping them from repeatedly sabotaging the nine zillion technologically advanced radar dishes located in the bathrooms of abandoned crackhouses throughout Omni-1. It's really quite a shame, as I want nothing better but to play a fun, futuristic, online game. Currently AO has none of those qualities except "futuristic," which is defined as "cleaning robots (of the FUTURE!)." Of course you won't read about any of this on any game review sites, as they undoubtedly can't see their computer monitors with their faces firmly lodged in between FunCom employee asscheeks. It's really a fucking shame when people have to read THIS SITE for honest reviews of games. Then again, it's really a fucking shame when people release a game with so much potential and so little functionality. Perhaps this game will be playable in two or three months. Perhaps FunCom will realize that releasing an obviously unfinished and unplayable product, then asking people to not review it until they complete coding it, is a "bad" idea. Perhaps I'm also a 50-foot tall mutant Japanese ballerina who can shoot laser beams out of her eyes. All of these ideas are equally plausible.