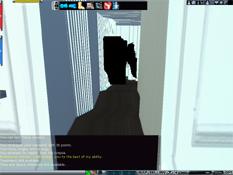 AO PROGRAMMER: "No, really, we want the player to do missions inside funhouses! OF THE FUTURE!"You are allowed to play as either a member of Omni-Tek, the rebels, or a neutral party. This alliance determines which city you are initially trapped in due to extreme lag (of the FUTURE!). If, by some amazing computer glitch you are able to leave the city, you will find yourself fighting against a large and varied army of enemies such as a:

Anarchy Online borrows a theme from Everquest, requiring players to run around and kill things over and over and over until they go up a level, at which point they move to a new location and kill slightly different things over and over until they go up another level. This is done so players become more "powerful" and look "cooler" to the roving packs of "14-year olds" who play the game while "masturbating" to the "Home Depot catalogue" in "their" parents' "attic." FunCom, realizing that Everquest players became addicted to watching their various stats slowly rise over a period of nine decades, decided to put even more upgradable stats in their game, thereby making it logically better. For example, here is a comparison of a normal online RPG stat requirement for using a level 20 bow, as compared to the Anarchy Online version: 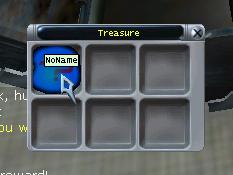 Half of the approximately 60 million stats are devoted to "nano technology," a skill which was originally called "magic" but was incorrectly translated to English from FunCom's native language of Martian. These skills allow your character to perform a wide range of exciting things such as "shooting a blue laser beam" to "shooting a blue laser beam which makes the enemy turn kind of orange." Thanks to the miraculous idea of "class balancing," the creators of Anarchy Online tried to ensure that each class sucks just as much as the next one, so no matter what type of character you choose, you will be sure that every other class combination sucks the same amount. This makes the game "fair," or as I like to call it, "boring."

FunCom decided to place emphasis on a player-driven economy by making it nearly impossible to use vendor machines in the cities thanks to the incredible lag (of the FUTURE!). Adding in unbelievable amounts of lag is FunCom's solution to nearly every problem in the game, ranging from city overcrowding to plaque and tooth decay (of the FUTURE!). They have also attempted to solve the problem of server overload by adding in code which causes your game to crash to the desktop every 20 minutes or so, thereby decreasing the stress of having so many people on the server at once. These are very futuristic and advanced concepts of the advanced conceptual future, and you should be thankful that FunCom spent so much time and brainpower developing these aforementioned conceptually futuristically advanced ideas. If you don't, then a pack of raving FunCom fanbois will race over to your place of residence and publicly crucify you while shouting "OKAY! FINE! QUIT THE GAME! LESS LAG FOR ME!" They don't seem to understand that the whole reason FunCom is patching the game is due to the overwhelming amounts of complaints against the game itself. If nobody was pointing out these terribly futuristic problem-solving skills that FunCom employs in Anarchy Online, then the game would be in the exact same state it was upon release (ie, "in beta 3 stage"). Perhaps if people keep voicing their opinion on AO, FunCom may patch the game so people can actually walk through large cities without worrying that their CPU and cable modem will spontaneously give up and detonate. Until then, players will get to experience these and the following "features," which obviously aren't bugs because the game is 110% completed and finished and functional:

Wow, I wonder why these (and so many more bugs features) aren't proudly listed on the back of the box?