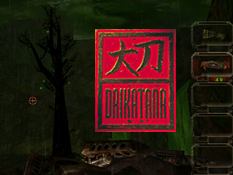 At a Glance: John Romero's long anticipated, infamous "Daikatana" has finally gone gold, and has been shipped off to the publisher. As a treat of things to come, Eidos has released the "Daikatana" demo, giving us lucky gamers a three-level preview of the epic, time traveling masterpiece. Romero and the rest of the highly acclaimed DK team should take a breather and pat themselves on the back for a job well done and - haha! Sorry folks, I couldn't keep that bullshitting up any longer; this game is awful. 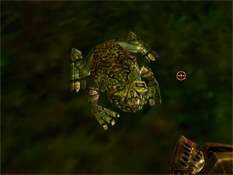 This is one of the millions of Evil Death Frogs in the game. Get used to looking at him, he's got a billion identical brothers.

It's always a sad day when you realize the Pod People have triumphed once again.

In case you folks out there don't know, the Pod People are responsible for creating all those God-awful movies, games, and television shows that the rest of us stare at and wonder, "who the hell thought this could possibly be entertaining?" The Pod People corrupted the "Trespasser" programming team by shooting mind control beams and causing them to go out and drink Big Gulps full of unrefined grain alcohol. The Pod People zapped Wes Craven and told him that the extra six dollars he would get from "Scream 3" would offset its lack of creativity, writing, and acting talent. The Pod People abducted Illiad and convinced him to make a "User Friendly" line of Linux ashtrays, BeOS corn cob holders, and Macintosh plastic mustaches. I am sorry to report that the Pod People have successfully added another victim to their growing list: gaming industry legend John Romero. Using "Advanced Technology", I will recreate the moment the evil Pod People first took control of the design guru, so we can note how this insidious group of evil beings operate:

The actual game demo is a mere 100+ megs, which can technically be considered as "the first mistake". Sure, it's getting more and more common for companies to release game demos which exceed 100 megs, but it doesn't help soften the review any for us gamers on 56k modems that have to wait half a day to get the file. It's one thing to go to McDonald's and order the Fillet O' Fish; it's another thing to drive seven hours out of your way to pick one up - and either way, it is still awful. Once I got the demo, I made the foolish attempt at actually installing it (in retrospect, I should've known better). I immediately got an error message during decompression, so I headed to one of the three Daikatana fan pages (which will soon be down to only two sites once Geocities finds out how much webspace the other one is taking up). It said I needed to manually unzip the install file into a directory and then run the setup file. I'll be honest; this is a HUGE strike against the game. Why do I think that something this small and inconsequential counts so much against the review? Simple - the team has literally had over two fucking years to make this game, and they don't even care enough to get a functional demo installer working? Don't they have any pride in this project, or do they simply not give a rat's ass? Or was it the work of the Pod People again? All three systems I tried to run it on got the same message, so it definitely wasn't a problem native to only computer.

Once I manually unzipped it, I attempted to run setup again, and it began prompting me to "insert disk 1" or something along those lines. The immediate question that sprung to my mind was not "what is 'disk one'?" or "where can I find disk one?", but "what the hell has Romero and his band of merry men actually been doing for the past three and a half years?" Once again, I fell back and used "Advanced Technology" to determine what they did when they were supposed to be programming "Daikatana":

Our "Advanced Technology" came up with a slew of more controversial theories, but I can't print them without Eidos threatening to sue me. Let me just leave it at this: "they involve Romero and a cage full of VERY unlucky ferrets".